This is a Raid

Gareth Evans on the new thriller re-inventing the action genre. 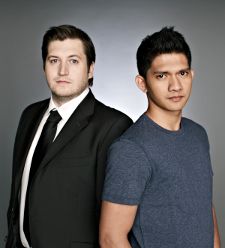 You may think martial arts are the stuff of dodgy Seventies crime flicks, but tense new thriller The Raid brings them up close and personal with a style that will keep you on the edge of you seat. It's the story of a SWAT team trapped inside an apartment building controlled by a drug lord, and it stars former Indonesian silat champion Iko Uwais. We spoke to director Gareth Evans to ask how it all began.

“ It was a few years ago and I was in the UK but I hadn't really settled,” he says in a gentle Welsh accent you might not associate with the blood and gore and gunfire on show in the film. “I hadn't really done enough to get known in the industry. My wife was living with me in Swansea and neither of us felt like we were going anywhere, so she put in some calls back home in Indonesia and managed to get a directing gig on a documentary on silat [television episode The Mystic Arts Of Indonesia: Pencak Silat]. I'd never seen silat before but I got to learn a lot about it, and that was when I met Iko.”

The story of their meeting is the stuff of legend. The moment he set eyes on him, Gareth knew he'd found something special.

“He wasn't the focus of the documentary – that was his master,” he explains. “We just saw him training while we were there. As soon as we saw him it was clear that this guy had something, a real potential screen presence. It was incredible. I knew right away that I wanted to put him in a film. So I told him so and got his details, and we stayed in touch. He didn't believe me though, he thought I was full of it, but when we got the funding and went back we got him to quit his job and come with us to work on the film. That was the first film we did together, Merantau.”

I note that I too can see what Gareth sees in Iko. He's a natural star.

Gareth is pleased. “We're working on raising his profile. We want to make him the next big South East Asian action star as well as promoting silat. I think he's got international potential. His English is limited but we're working on it.”

“As a result of working on the films I've had to learn and I've picked up enough Indonesian to get by,” he says.

So how did this particular film develop?

“We originally wanted to make a different film, a follow-up to Merantau, but we couldn't get the money for that,” he admits. The financial climate in Indonesia was very, very poor, so after a year and a half of trying we said screw that, let's do another film. So really it was a back-up idea born out of the need to do something on a low budget, in a single location. As it happens I'm a big fan of single location films, like Die Hard, Assault On Precinct 13 and Escape From New York, but to make them work you have to maintain a certain pace so I was looking at how to do that and what we came up with was blending genres. In The Raid, if you take away the action and martial arts, at its core it's really a survival horror film.” He described several scenes that I won't spoil for you here but that you'll recognise when you see them, explaining how they really classic horror movie stuff, just differently presented.

The horror aspects of the film were impressive enough to win it the support of the Frightfest team and a screening in their section of the Glasgow Film Festival. “I really loved that, that was a great audience,” says Gareth. “It was great to get such a positive response.”

Designing the film was one thing, shooting it quite another. Gareth's team wanted to shoot in a real building and spent a long time searching for one, but the best they could find was only four storeys high. The rest had to be added using CGI. “We also had to build lots of sets. The stairwells are part of the real building but the corridors, the atrium and the sub rooms were all built as sets.”

The design of those sets created its own problems.

“We wanted to keep it all tight and claustrophobic so we made the corridors no more that two metres wide. That made it difficult to get the camera wide enough for the fight scenes, when we wanted to pull back and see them in profile so we could see the detail. So we had to position them near doorways and the ends of corridors.” He describes situations in which the camera sees a closed door and an assistant opens it as the cameraman moves so he can step back without us seeing how it's done. This meant that the crew, as well as the cast, often had to have their movements carefully choreographed.

“Fortunately me and my DOP (Matt Flannery) are both from low budget backgrounds so we enjoyed the challenges. It's interesting inventing new ways to do things.”

The team enjoyed their experience so much that they're already working on a sequel. “We're starting pre-production in September so hopefully it'll be finished by the end of the year after that.”

DC League Of Super-Pets The Deer King Fire Of Love Hit The Road Joyride Paris, Texas The Reef: Stalked Vengeance Is Mine, All Others Pay Cash What Josiah Saw

Cruise Convenience Story Leonor Will Never Die Walkabout Scooter Inu-oh Good Boy Lily's Mirror What To Do With The Dead Kaiju? Vengeance Is Mine, All Others Pay Cash Infectious Nihilism And Small Metallic Pieces Of Hope The Killer Next Sohee Incredible But True Vortex Piggy Sharp Stick The Fifth Thoracic Vertebra The Pass: Last Days Of The Samurai Give Me Pity!