Jerry Rothwell talks about his documentary style and latest film Town Of Runners. 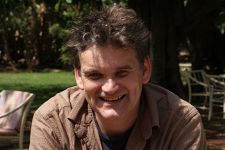 With expectation of the London Olympics beginning to bubble up, Jerry Rothwell's inspirational Town Of Runners is trotting into cinemas at the perfect time. I caught up with him on the eve of its world premiere at Tribeca Film Festival to chat about the origins of the film and his career as a documentarian.

Rothwell says there were two things that drew him to the idea of charting youngsters in the small Ethiopian town of Bekoji, which has been the birthplace of a string of world-beating athletes.

"The idea for this film very much came from one of the producers - Dan Demissie - who was interning at Metfilm [the producer of Rothwell's films], who is now producing the film with Al Morrow," he says.

"Dan was interested in doing a film about Ethiopean running and particularly the region. He'd actually never been to Ethiopia - his family came over in the Seventies. So the experience of making the fim for Dan has been reconnecting with Ethiopia. He went for the first time and in the process of the film learnt Almaric and by the end of the film was translating and now wants to go and make films in Ethiopia - he's at the National Film School now.

"But what one thing that drew me to it was watching those Kenyan runners as a kid and the other was spending a lot of time as a parent around athletics in the UK. My daughter got really heavily into running. that was kind of odd because we're not a sporty family at all.

"That was what drew me to the thing of, how do young kids of maybe 9 or 10, suddenly internalise that ambition and it drives them for the next five years?"

The children whom Rothwell follows in Town Of Runners have dedication by the bucketload. As one of them puts it early in the film, "running is work".

The three youngsters - Biruk, the son of a kiosk owner and best pals Hawii and Alemi - all end up having surprisingly different life experiences. But how difficult was it to pick just three subjects when you have an entire town of running fanatics to choose from?

"You need to find something specific to locate that kind of story and we came across the work of the coach," says Rothwell. "I knew there were runners in the town who were running in the Beijing Olympics so I thought it would be great to get that moment of someone in the town winning. So we got a small grant from Worldview and we used that to do one shoot. We were in phone contact with the coach and asked if he could find a number of young people who might be interested in doing a film or might be interesting. Not necessarily the best runners, because we were interested in how running played out in those who weren't necessarily the best as well as the best and he came up with about six young people.

"We shot with them for a week and we narrowed it down to Biruk, Alemi and Hawii. Alemi and Hawii because of there friendship and that sort of opened it out into a different area. And Biruk, because I was interested in a kid from the "town of runners" who didn't run, or didn't really run. Perhaps they didn't even like running. Biruk's a kind of outside observer figure on the town. He's the thing that keeps us going back to the town."

Biruk acts as a 'chorus', documenting in his own words the comings and goings of the town as the two girls strive to turn their dreams of becoming world-beating athletes into a reality. There is a point where both of them leave the town for running clubs miles away but their experiences at the two clubs couldn't be more different. In fact, one has such a bad time, especially initially, that surely it must have been difficult for Rothwell not intervene?

"There is that line," Rothwell agrees. "To what extent, while you're shooting, do you try to solve the problem and to what extent do you document the problem? And you're slightly torn between those two things. For example, we got them all blankets that night when they turned up at that place without blankets, but for me it's also important for me to film the situation and how it would have been if you hadn't intervened. That's probably more important than intervening in the long run, that will actually create awareness about it."

It is that creation of awareness that is key to the film. It's not a polemic or pushing a set agenda but it does ask questions both of how emerging countries cope with their changing structure and of how we in the West need to adjust our preconceptions of Ethiopia. In the West we've been bombarded with images of famine and poverty in the African nation for generations, from Biafra to Bandaid.

"Bekoji itself is a very fertile region," says Rothwell. "The first time we went was in the rainy season and it rained all the time, which is totally the opposite of your impression of Ethiopia. It was kind of interesting for the generation of teenagers in the country now. There's a huge bubble in the population of that age, with something like 75 per cent of the population under 25 or 20, so it's a huge young generation coming through and that generation is the generation who are experiencing all the developmental change, with the technology, the roads and urbanisation."

Change is not something that tends to come in a rush, however, and the gradual urbanisation is symbolised in the film by a road to Bekoji being built by the Chinese that gradually takes shape over the course of the runtime.

"I suppose you're always looking for things that can act like very specific metaphors that run through a film" says Rothwell. "There were a few, actually, not just the road. But the road was a thing that each time you went back it had made a bit more progress."

The film itself is also contributing to small changes through a hook up with non-profit organisation Running Across Borders.

"We ended up in a long conversation with them about media and how could the town use this somehow," said Rothwell. "We ended up, each time we went, contributing money to the athletics budget that enabled people to go to competitions. But we want to try to use the focus that the film provides on the town to bring resources to it.

"They're far better off developing their careers in Bekoji if that's possible, but they can only really do that if they have a decent track, club and the coach is supported in his work. So those are the things we're trying to do.

"We came across Running Across Borders, that run a club in Addis, and basically they're extending what they do into Bekoji. Already some runners from the UK have gone and trained with the coach and that brings money into the town and contributes to the budget. It's not just like a 'sponsor an Ethiopian child' thing - they've got something that we want.

"A few people won't necssarily have a massive impact. If it became like Iten [a high-altitude centre for athletics training] in Kenya, it would be a different thing but it needs to grow that gradually. It needs to be structured."

Looking at the bigger picture of Rothwell's work, it seems that he is drawn to projects that involve young people, including previous festival hits Donor Unknown and Heavy Load.

He says: "I suppose the filmmaking I started off with was filmmaking that was sort of a dimension of youth work, when I was early and mid-20s. So, I suppose since I've started making feature docs, there's an opportunity ... they can be very empowering for the people in them. It's not that that is the purpose of the fim but it's something the film throws up that you can use.

"In a way, docs are always not just about the film in the sense that they have these ramifications in real life. As a filmmaker I'm trying to make the best film possible in that situation but you're making a little kind of pebble that can create ripples and if people pick up on the ripples, then that's great."

It also seems that it's important to be crafting more than one pebble at once if you want to make a documentary living, with Rothwell saying he frequently has several projects on the go at any time - so that when he was shooting Donor Unknown he was simultaneously making Town Of Runners, meaning he could be filming in an RV in Venice Beach in the US one month and on a small holding in Bekoji the next. He also has a third film in development, about the founders of environmental group Greenpeace.

"The founders all started out in a small part of Vancouver and decided to sail a boat into a nuclear test zone to protest against American testing in Alaska," he says. "The film is really about how that action evolved into Greenpeace. It follows a group of five characters over eight years. There seems to be two kinds of docs that I keep making. One where you're telling a story that has already happened and it's your job to tell that story and research it really deeply and tell it in the most compelling way and the other is where you have a promising situation but you don't know what's going to happen - you're just trying to follow it and pull stories out of it.

" I was interested in the group dynamics that grew and the way that friendship and politics conflict. And how a group that really start out living very intensely and closely together, end up on quite different ends of the political spectrum. At the moment, it's called How To Change The World, in a sort of tongue-in cheek sort of way.

"They're not campaigning films. I think there's a whole kind of movement around documentary for campaigning films that I don't feel a part of. I'm not trying to make films to highlight an issue, I make them to ask questions and explore a bit of territory and that's something slightly different. The films I do are more to do with trying to push people through a sort of thinking process."

Town Of Runners certainly raises questions but, perhaps more importantly, it's a fascinating snapshot of a nation in progress and see seen through the eyes and aspirations of those who really count - the young. As Rothwell points out: "It's a fantastic thing to go into a cinema and see two or three years unfold in 80 minutes."

Town Of Runners is out on general release across the UK now and is also playing at the Tribeca Film Festival in New York.

All I See Is You Around The Sun Black Water: Abyss The Destruction Of Memory Echo La Llorona Mara Max Reload And The Nether Blasters Papicha Peripheral Red Penguins A Thousand Cuts Waiting For The Barbarians What We Found Young Ahmed

Mara Julia Scotti: Funny That Way Max Reload And The Nether Blasters All I See Is You Around The Sun She Dies Tomorrow Black Water: Abyss A Thousand Cuts Waiting For The Barbarians Red Penguins Nothing But The Blood Papicha The Destruction Of Memory What We Found Make Up The Fight The Vigil SamSam The Big Ugly 100% Wolf

Stay-At-Home Seven: August 10 to 16 Movies to catch at home this week