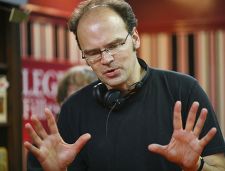 Jean-Pierre Améris on the set of Romantics Anonymous

Jean-Pierre Améris's Romantics Anonymous opens the French Film Festival this week - featuring Q&As with the director himself - before going on selected release around the UK. A funny and romantic exploration of a relationship between a painfully shy chocalatier Angélique (Isabelle Carré) and her equally bashful boss Jean-René (Benoît Poelvoorde). Angélique is trying to steel her confidence by attending the "emotions" anonymous self-help groups of the film's title, while Jean-René is using confidence tapes and seeing a shrink, yet, as the film goes to show, there's room for romance in unusual places. Boasting musical numbers and a catchy joie de vivre it has become a crowd-pleaser on the festival circuit. This is the first time Améris has turned his hand to comedy, so when Eye For Film caught up with him at Tribeca Film Festival earlier this year, we asked him about that and his overall motivations behind the film.

Have you been to these self-help groups? Is that where the idea came from in the first place?

That was really the origin of this adventure. I went myself, a few years ago. I was at at a stage in my life when I was going through some difficulties. Of course, it's all relative, compared to other people, I didn't have a bad experience. But I was at a stage where leaving my apartment was a problem, even picking up the phone was a problem and let's not even talk about walking into a restaurant by myself. So, I was reading this article and I came across this group called Emotions Anonymous and it was really helpful. It's a self-help group that started in the US in the Sixties and it made it to France in the Eighties. It's set up the same was as Alcoholics Anonymous or Narcotics Anonymous, with the same style.

At what point did you decide to turn your experience into a film - was it after you'd been to the group? And why did you choose to make it a comedy? After all, you could have used this material for a serious film.

The way I am - since I am a filmmaker - is that everything I experience in my life becomes part of a movie. I thought when I was there and afterwards that these situations that I was witnessing went beyond my particular case. There was a lot of material there. Because this kind of psychological attitude is something that a lot of people have in common. What I thought was interesting is that there are people from all walks of life - rich people, poor people, old, young, men, women. And what you find out is that they all have something in common - they find it hard to find it to accept themselves. They think that they have issues; that they're not beautiful enough, not interesting enough, that they're too short or too tall or that they don't say interesting things. They're not at ease with themselves. And I realised that pretty much everyone shared these concerns and I thought it would make a good topic for a movie.

When I started writing in 2006, I realised right away that it was going to be a comedy, because although I realise that the subject itself can be tragic, there is a comic side to all this. Because when you start telling the stories of what people go through, you see right away that you have to laugh. For example if you think what the main character does in the restaurant when he runs out because he realises he has the wrong shirt on, in the moment it is tragic for him - but the moment he starts telling the groups, everyone laughs. They don't laugh at him but they laugh at the funny situation, so I realised that laughing is really the best therapy. So it was obvious that it was going to be a comedy - and I wanted to do a movie that was positive, I didn't want to make one that was sad. Because even though I'm talking about people who are at a stage in their lives where, because of these psychological issues, they could be feeling like a failure, I wanted to say they are not failures and that there's still a lot of hope. And that they can overcome their fears and that their lives can be full of joy.

Where did the idea for the musical element come from?

The idea of singing came from the actress Isabelle Carré. I've always loved romantic comedies and musicals and I discussed that with her. She shared with me that she's exactly like me, she's over-emotional in real life and whenever she has to face a difficult situation, like a job interview or a festival, and she gets overly emotional, she sings... and she sings that same song from The Sound Of Music. It's a song I've always loved, so when she brought it up, I figured it was a great idea to include that. Also, I think it is a movie in which these characters have a hard time talking to each other is something that is connected to the body but is not dialogue based. Also, I wanted to create and element of joy, a joyful story, something that talked about the pleasure of life. That yes, people have difficulties but there's also a lot of joy in life.

How easy was the film to direct and to cast?

I already knew Isabelle Carré and I'd worked before with her three years ago on a TV movie called My Mother Is Crazy (Maman Est Folle) and we had developed a great level of trust in one another and we really get on well. We have a lot in common - we both try to overcome being over-emotional by always being on time, always being polite and making sure nobody notices us. So, there's a lot of affection there. It was very easy to film her and for me to encourage her to show her funny side - because I knew she had it in her. Also, she had a great chemistry with the lead actor Benoît Poelvoorde, which really helped her develop her funny side. He was great in allowing her to show her comedic actor side and at the same time, she was great in allowing him to walk away from being a comedian and show more of his emotional side, so they had this great alchemy between the two of them.

Do you feel that it has been a sort of therapy to make the movie then, in a way?

Actually, as far as I'm concerned, cinema is to me what chocolate is to Angélique in the movie. I think that doing something is the only way you have to overcome this extreme fear that overly emotionally people have. It can be anything. It can be putting together a meal for people you love, doing something that you do with your hands that allows you to be free from all the issues that are causing pain and fear. It is also by doing something that you can share with other people. Something that you do for others that they end up loving. They share this love with you and so it's a way for you to gain trust in yourself and see that you're able to do something that other people will appreciate. So I always encourage teenagers, whenever I have a chance to talk to them, to go out and do something, to create something because otherwise the risk is for people to become too self-absorbed and to close themselves off and not experience life.

In my personal life, cinema really helped me in this way. When I make a movie I always think of my viewers and I'm always thinking that if there's someone who goes to see one of my movies at a point in their life when they're depressed then by seeing a film they can think, 'Well, that's it I'm not alone, I'm just like the people I saw onscreen. I can take a chance and if I do, well, I may fail but even if I do fail it's not the end of the world.' As a filmmaker I feel like I have a responsibility to give trust to people and to allow them to enjoy life.

How do you feel now you've done a comedy - do you think you'll do more?

It's really difficult to make a comedy. My film had quite a lot of success in France so a lot of people are pushing me to do more comedies, of course, but I don't think it's my natural inclination. I think I'm more in touch with drama. I also like to make people cry - in a good way. In this particular movie, I didn't set out to make a comedy from the start, the subject dictated that. I think that if I sat down and decided to write a comedy it would not work out. The film that I have in mind for my next project is actually not going to be a comedy or a drama - it's going to be a melodrama. In general, I think as a filmmaker, I want to make movies when my audience either laughs or cries but whatever I do I want it to touch their emotions one way or another. So I don't know if I will ever make another comedy in the future but what I do know is that it's difficult to make comedies. But what I want is for my audience is to feel something.

Romantics Anonymous screens at Edinburgh Filmhouse on November 10, Glasgow Film Theatre on November 11 and Aberdeen Belmont on November 18. It will go on selected release across the UK from December 2 and in the US in mid-December. Jean-Pierre's next film, an adaptation of Victor Hugo's The Man Who Laughs (l'Homme Qui Rit) will begin shooting in the Czech Republic soon.