Sundance 2011: Opening night and day one

Redford on retiring, plus reviews of Submarine, Tyrannosaur, Project Nim, The Music Never Stopped and Kaboom. 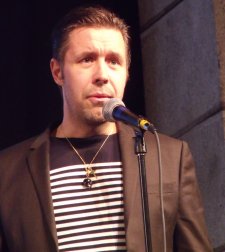 I'm lucky enough to be able to attend several film festivals each year - and every one of them has unique elements that give them character and style. In the case of Sundance, one attraction is the chance to see the latest batch of American indies months and months before they will make it back to the UK - Blue Valentine, for example, which screened last year, has only just opened, while Ballast will get a selected release this March a full three years after it one the directing award out in here in Park City.

But it's the way that the festival totally consumes this small ski resort up in Utah that really makes it special. There's audience buzz on the bus and street as cinephiles - and, crucially, filmmakers and stars - from across the globe mingle and chat about what they're doing here, what they've loved and what they've hated. And there are celebrities all over the place. For example, we spotted both Danny Glover and Morgan Spurlock while eating lunch. Good to see Spurlock taking a healthy option and wonder idly whether he ever dares eat a burger in public post Super Size Me.

With so much going on between now and January 31, including screenings across the US and web-streaming, it's little wonder that Robert Redford is proud of his achievements - but he isn't done yet. At the opening press conference up at the Egyptian Theatre on Main Street, he said: "I'm going to die... but I've not thought about that." It's great to see that he is as passionate now about film as he was 30 years ago when he founded the Sundance Institute and as always, he shrugs off any suggestion the festival is too commercial, insisting, "we're just doing it the way we always have".

I'm doing it the way I always have, too, muffled up to the eyeballs in layers and winter gear that puts the 'why?' into style. But thankfully, at Sundance it isn't the glamour that counts, it's the film - and I kicked off this year's edition with a screening of Man On Wire director James Marsh's latest - Project Nim. This documentary, based on the book Nim Chimpsky: The Chimp Who Learned Sign Language, proves again how adept Marsh is at assembling archival footage and interviews to create a vivid picture of a life, even if the life in question this time is that of a chimp. Read my full review here.

Managed to catch four films on the first full day of the festival - two from up-and-coming Brits and two from the US. As the opening credits roll on both Submarine and Tyrannosaur, and last night's Project Nim, I feel a pang of sadness when the UK Film Council logo appears and wonder how future films like these will fare with different funding structures now the government has axed it. Time will tell, I suppose. But certainly on the strength - and breadth of subject matter - of these three films, the UKFC has been getting it right in the past year.

Submarine is an off-beat coming-of-age tale based on the book by Joe Dunthorne - think Adrian Mole with less politics and more Nietzsche. Oliver Tate (Craig Roberts) is a typical 15-year-old... except for his Serge Gainsbourg looks and ideas of grandeur. Despite his intellectual aspirations, he views the world from the typically narrow egotistica confines of many teenagers, considering events for the most part, according to how they impact on him and from a standpoint of "I don't want anything to change". Chief among his concerns are potential first girlfriend Jordana (Yasmin Paige) and the marital problems of his parents (Sally Hawkins and Noah Taylor) caused in his eyes at least - by the self-proclaimed mystic (Paddy Considine), who lives over the road.

What ensues is a sweet and charming whistlestop look at this anti-hero's life, with plenty of nods to the films of the French New Wave and others. The best of the humour is to be found in tiny details, such as the use of great slang ("fuck muppet" may now be my favourite term of abuse) and the sort of obssessive cataloging that teens tend to make when considering potential loves ("Jordana tasted of milk, polo mints and Dunhill International"). First-time fiction feature director The IT Crowd's Richard Ayoade makes good use of Oliver's parents' relationship as a counterpoint to the first flurry of young love between Jordana and Oliver. And, if the constant cutting, homages and flights of imagination outstay their welcome somewhat, there is enough sweetness in the tank to keep you caring to the end (Read our full interview with Richard Ayoade here).

Considine's character is played for broad comedy in Submarine, which is a light year away from the style of his own feature debut. Based on his award-winning short Dog Altogether is a compelling but incredibly grim tale of abuse, violence and redemption.

Peter Mullan - who can move from simmering violence to regret with little more than a twitch of the face - is perfect in the central role of Joseph. Working class and out of work, violence is his constant companion, simmering just below the surface.

A chance encounter with charity shop assistant Hannah (Olivia Colman), sees him make assumptions about her neat middle-class life, little realising that violence is also her constant companion - although she is a victim not perpetrator thanks to husband James (Eddie Marsan). While not exactly wallowing in violence, this is a brutal film that doesn't shy away from the grim reality its characters face. It is a tough watch, but a phenomenally well-acted one. Colman, in particular, is a complete revelation as the battered Hannah, so good that it's hard to imagine her returning full-time to her usual comedic roles after this. Mullan is magnificent as always, while Marsan represents his violence in a different but no less compelling way.

The was drama, too, in American indie The Music Never Stopped, which features Thumbsucker star Lou-Taylor Pucci as a man who turns up two decades after running away from home. His parents are elated until they discover that Gabriel has a large brain tumour which, though benign, has had a massive effect on his memory. Desperate to form some sort of reconnection with their son, his mum (Cara Seymour) and dad (Law & Order regular JK Simmons) turn to a music therapist (Julia Ormond) who finds that music could be the key to his recovery.

In essence an emotional drama, charting the bond and difficulties between father and son, this is a solid if unremarkable film. Industrial quantities of tissues are required for the highs and lows of the plot, yet there's little here that couldn't be predicted from the film's outset. Pucci is fine in the central role, but Simmons and Seymour are the real stand-outs, capturing a real sense of impotence mixed with resilience in the face of Gabriel's condition. The film should particularly appeal to children of the Sixties, who will enjoy the period soundtrack featuring the likes of The Grateful Dead and Bob Dylan.

The 18 to 20-somethings of today, meanwhile are surely the target demographic for Greg Araki's latest Kaboom, which is doubtless either the bomb or deserves to bomb depending on your viewpoint. Playing out like an episode of Scooby Doo on acid, with sex thrown in at every opportunity, it's a playful hyperactive trip of a film. The story, such as it is sees bisexual student Smith (Thomas Dekker on eye candy duties), find himself at the centre of an odd mystery concerning a woman he thinks he has seen murdered while on a drug trip. Running alongside this is a subplot concerning his best pal Stella (Hayley Bennett), who is trying to extricate herself from a relationship with a girlfriend who has supernatural powers.

There is much more bizarreness than that in a plot which also features men in animal masks and an underground cult. Never less than entertaining, there is no denying the wild imagination at work in the first half of the film but as the plot elements stack up into a large pile of irony, Araki backs himself into a corner, where the only route out feels like a betrayal of all that has gone before.

Stay-At-Home Seven: August 3 to 9 Our weekly round-up of films to catch on TV and streaming services

Streaming spotlight - summer holidays Films to take a break with