Eye For Film >> Features >> Inside The Last Exorcism

Inside The Last Exorcism

Daniel Stamm reveals some of the secrets behind his latest film. 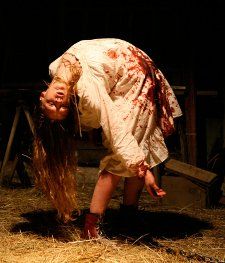 Ashley Bell in The Last Exorcism

Opening in cinemas across the UK this week, The Last Exorcism invites audiences to join with a small documentary film who are following a jaded preacher determined to expose the exorcism racket. Unfortunately, a vulnerable girl in the Louisiana backwoods might present him with a case that's more than he can handle. I talked to director Daniel Stamm and asked him how the idea for the film developed. It reminded me of some of the classics of Seventies horror cinema - was that intentional on his part?

"In making a movie about exorcism we kind of knew that everybody would still have The Exorcist in their head, and The Exorcism Of Emily Rose wasn't too long ago, so we wanted to make sure that in making our movie we didn't repeat anything that they had done," he stresses. "Whatever The Exorcist did you can't really top because they did it brilliantly. We wanted to make a movie that doesn't rely on special effects at all. It doesn't have the spinning head, it doesn't have the yellow eyes or the voice, or any of that. Instead we wanted to base everything in the characters and in the acting. Because our movie is based on the question 'Is this girl possessed?' anyway, so we couldn't really do any of the supernatural stuff, or have her levitate or anything."

Like so many people in the horror business, Daniel is warm and well-spoken, an intelligent man obviously passionate about his craft. He still speaks with a Hamburg accent despite several years spent living in Belfast and Los Angeles. America clearly still has some surprises in store for him. I ask about the rumour that he encountered a real exorcist in the course of making this film.

"We did have an exorcist on set," he confirms. "It was a complete coincidence, because one day our driver mentioned that his brother actually performed exorcisms and so he was there for most of the shoot as a kind of advisor. The interesting thing about him was that it was as if he was working in a bank or something.

"There was nothing exciting about it to him, necessarily. It was a job. He went to work in the morning and he fought the Devil and he came home at night. It wasn't just for the exorcism that it was good to have him there, but for the sermons too, because we wanted to make sure it was authentic. The writers did their research, I did my research, but I asked the actors to do independent research as they would actually have experienced something rather than me just telling them about it."

The acting in the film is particularly interesting. There are no big names there, though some cast members are fairly well known for their television work. All of them seem to fit perfectly in their roles. How did he go about finding them?

"It was funny because when I first talked to the producers they said that they thought the really difficult one to find would be Cotton [the preacher], because everything hinges on Cotton, but then I thought that the really difficult one was going to be Nell, because the central question in the film means that, as the audience, you investigate and question and focus on her and it would be easy to give something away. So I though she'd be very, very hard to find. And then of course the producers were completely right and Cotton took weeks to find, while the second girl that walked in the door was Ashley Bell."

Talking about her now, he is clearly still struck by that remarkable first impression. They chatted for a while in the waiting room before the start of the audition, when she didn't know he was the director.

"She was so smart and so sweet that I found myself hoping she could pull off the dark stuff because she could certainly do the 16-year-old innocent stuff," he says, " and then we went into the room and did an improvised exorcism and she went up the walls. It was crazy. I cast her right away and said 'Let's stop casting for that role because we're not going to do any better than this.' And then I found out that she could actually do the whole back bend stuff. She's double-jointed. I didn't find that out until one day before the actual shoot of the exorcism scene.

"We were sitting in the hotel lobby and I asked her if she had any ideas, and she got up and she bent over backwards right there and then. I was so excited that I immediately rewrote the scene. The good think about that was that Cotton - Patrick Fabian - hadn't seen her do that stuff and didn't know she could, so his reaction to it in the film is genuine. It's very different from making it work through an effect or something, where the other actors don't really react to the real phenomenon."

I am reminded of the famous chest-bursting scene in Alien, which was rigged up so that the actors surrounding John Hurt didn't know what was about to happen to him. [Rec] took a similar approach just a few years ago. But making such a scene work still requires the right actors, and Daniel's hunt for Cotoon was tough.

"With Cotton, we cast for weeks and weeks and brough in hundreds of actors. Then finally Patrick walked in and I asked him to improvise a sermon for me, and he did this eight-minute long, immaculate, perfect sermon. I asked if we could do it again, just in half the time. I thought he would just take out some content and do a shorter version, but he didn't cut anything, he just sped up and talked twice as fast. It was so fast that I couldn't keep up, I couldn't process what he was actually saying, but there was energy he put across that made me want to stand up and cheer and say, 'Whatever you just said, Hallelujah!'

"That's where the banana bread scene in the film came from, where he's reciting a recipe and the congregation still gives him a 'Hallelujah' because they have no idea what he just said. I showed that tape to the producers. When Patrick came up on the screen, one of the producers had just gone to get some water out of the pitcher and he froze mid-motion, with his glass of water in one hand and the pitcher halfway tilted in the other, and just stared at the screen for three minutes and didn't breathe. That's when I knew I had my Cotton."

I'm interested in the casting of the other characters, the dicumentary filmmakers through whose work the film is presented. Daniel's previous film, A Necessary Death, also used the pseudo-documentary approach and explored the ethics of documentary filmmaking. Was that a theme he wanted to continue here?

"I am still fascinated by that idea," he tells me, "but the producers didn't want to emphasise it much. But it was still important to me that we did have the documentarian there for all of the film, so that with everything we shot we could feel her presence and relate to her even if we couldn't see her. So Iris actually has a huge part in the film and was the person who was on set most. We hardly see her, but she brought out the performances in the people that were actually on camera."

The ethical issues within this film are also interesting, in particular the clash between Cotton's rationalist approach and the religious concerns of the people whose community he visits. This was clearly a central concern for Daniel.

"It was important to us that we didn't make a decision about which side we were on in bringing those two forces together, he explains. "We wanted to make a fair and eloquest and intelligent argument, as much as possible, for both sides, and just have them clash. Really the movie is about these two sides not being able to work together. If they could compromise at any moment, there might be a bridge between them and they could maybe actually save the girl, but because each of them is claiming to be completely right, they don't see the reason to compromise. That's the tragedy of it."

Another thing that struck me about the film was the absence of any concrete evidence for the existence of God. Daniel acknowledges this perspective, but for him the ambiguity lies in a different place.

"We always talk about this whole 'if you believe in God then you have to believe in the Devil' thing, and for me it also works the other way round. In the end, if Hell opens up and we see what we might assume is a demon, it's likely that there is also a God. But I don't want to make a movie that's 90 minutes long and in the end tells you if there is a God or not. It would be a pretty arrogant thing to do. The other thing is that if Cotton finds his faith only when the ground is breaking open, I don't know if you can really call that faith. I don't know how God would react. I don't know if He would say 'Okay, you're asking for help, so here I am , let's do this,' or say 'Dude, you kind of figured that out pretty late. I don't know why you're asking for help now. Why don't you go and figure this one out on your own?'"

Some viewers and critics have complained that the ending is too rushed and incoherent. Does he think this is fair?

"I don't see any other way to do it," he says, "because if you and I take a walk right now and we walk upon something like that, we wouldn't get all the details, we wouldn't get all the answers. There would be open questions - it's true to the format. Yes, the ending is abrupt, but it has to be abrupt because there's no way to have a scene that nicely ties up all the loose ends."

Finally, I ask him what he's working on now. The answer will have fans of The Last Exorcism eagerly awaiting more news.

"My next project is a supernatural thriller and it's produced by one of my favourite filmmakers in the world but I can't say who because the deal is still being made. But it's not a fake documentary, it's a standard narrative movie."

Above Suspicion Arthur & Merlin: Knights Of Camelot The Beach House Browse Buñuel In The Labyrinth Of The Turtles Clemency Come As You Are Divos! Finding The Way Back Ghosts Of War Litigante Radioactive Relic Scoob! The Tobacconist We Are Little Zombies

Browse A Girl From Mogadishu Above Suspicion Divos! Karabash Ghosts Of War Finding The Way Back In Bright Axiom Cooked: Survival By Zipcode Scoob! Arthur & Merlin: Knights Of Camelot The Tobacconist It Couldn't Happen Here Relic Brigitte The Beach House We Are Little Zombies Capital In The Twenty-First Century Isle Of Us Last And First Men

Stay-At-Home Seven: July 13 to 19 Films to catch on streaming services and TV for the next seven days