Eye For Film >> Features >> In the court of the enfant terrible

In the court of the enfant terrible

We tussle with Ken Russell. 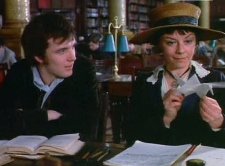 He is ensconced in a corner chair, overflowing the sides. Like a Chinese fat Buddha, and wearing a quizzical smile capable of disarming unwary newcomers. As I shake his hand, I am impressed, as I was the previous day when he introduced a screening of Savage Messiah, by his aura of kindness and gentleness. Unlike most celebrities, he has no film or book to promote. He is here for our benefit and, at nearly 83, he looks as if we may have exhausted him.

I offer him my best wishes for his forthcoming birthday, and also congratulate him on his new exhibition of photographs at Proud Chelsea Gallery. I have just caught a glimpse of some of them in this morning’s online newspapers and they are impressive, capturing the spirit of the Fifties in beautiful black and white. As we chat, his wife Elize appears. A very lively woman, at yesterday’s Q&A she delighted the audience with the story of how Savage Messiah brought them together. It looks as if I will have two for the price of one in my short ten-minute allocation.

“Can I just shoot questions?” I ask. From the little I know of Ken, he will probably answer questions he fancies and ignore ones he doesn’t. Or else give some Zen-like one-word answer. I try to contain my enthusiasm and slip into formal ’interviewer’ mode.

He shouts. It’s as if his voice alone is somehow going to lift him out of his seat to make the point. In case I haven’t followed the eureka moment, he offers a further three words of explanation.

Ken: They are linked!

Elize interjects, obviously aware that the mere human interviewer and Eye For Film readers might like something more substantial. “Your sex drive is very linked to your artistic drive. Haven’t you noticed?” I hasten to add that she is looking at Ken, not myself. But Ken has assumed an expression of beatific innocence. Elize turns to me: “Well, his wife has!” There’s general laughter all round. Perhaps one shouldn’t ask the creator how he creates. Would one have asked Tchaikovsky? Risk being cast aside by the conductor’s baton?

Chris: Many of the artists you portrayed on film have been musicians. The dancer you chose to portray was the great Isadora Duncan. What was it about Duncan that attracted you?

Ken: She was a lady. (laughter – it’s something in the way he says it.) She had a unique depiction of a dance. And style. I was very moved by her art. As was her husband.

Ken: She took up with him and they lived in a palace.

This had the benefit of accuracy of course. Duncan was the mad, passionate fashioner of modern dance. Sergei Yesenin, the Russian, equally inspired poet, was her husband. But it was the rich magnate and heir of Singer Sewing Machines who would later become her patron. He didn’t have the Savage Messiah mentality of Yesenin, or even of Ken and the people he portrays on film. But he was rich. And he kept her in a high lifestyle until he tired of her artistic tendencies. Singer wanted a wife, not an artist. Rather like the film industry would like Ken to make dull movies that sold. (Ken used to be a ballet dancer before he was a photographer and filmmaker.) I mention I’m a fan of Duncan but have never been able to get the Ken Russell version. “We must send you a copy,” says Elize.

I feel I should make the Scottish connection. Ken and his very charming wife seem determined to have fun. But not an awful lot is actually being said. His expressions tell a thousand words. Can I get any sense out of him?

Chris: Bringing it to Scotland... You hold this wild passion for art, and the anti-establishment revolutionary spirit, as found in Duncan and in Gaudier (Savage Messiah). And maybe the poet-magician (Aleister Crowley)..? You planned to touch on him in a project called Bravetart Vs The Loch Ness Monster?

Chris: And Aleister Crowley – you’ve come across his writings...

He smiles genially as if speaking of an old friend.

Chris: Is the project completed?

Elize: Every time we start to do it, some disaster occurs – we’ll thank Aleister Crowley for that. But we’re very stubborn. It will be done in some form. We’ve got half of it. We’ve got the actors, we’ve got the songs. (More laughter – the ‘Curse of Boleskine’ – as it was sometimes called, in reference to the magnificent house – Ken calls it a ‘castle’ – on the banks of Loch Ness where Crowley performed his magick.) But Ken has gone into silent mode again. Maybe sensing (as a Catholic) that there could be deep waters there. So no Kenneth Anger style exposés.

Chris: Are you a Christian, a Catholic? I will be quite shocked if you say ‘yes.’

Ken nods, but with a quizzical expression.

Elize: He worships the thunder and lightning. So it’s more a pagan Mary.

Ken: I was converted to Catholicism. A station master. Before The Devils.

Ken: I was converted by this recent convert himself. We used to talk every evening in a brooding old house in Bayswater. One day he said to me, “You should be a Catholic. We both worship (voice drops to a conspiratorial whisper) ‘The Great Spaceman in the Sky’.” Wouldn’t you be interested?

Chris: I never knew that’s what Catholicism was about.

Ken: He said, ‘Oh, We’re in constant touch!’ He waved this rosary in my face!

Ken: “Now you will be in touch with The Great Spaceman.”

Elize: He has a God-phone he can call God on.

Chris: I’m not being irreverent am I?

Elize: There’s no possibility of being irreverent with Ken.

Ken: Anyway, that’s the end of that conversation.

Chris: What could be done to make British filmmaking better?

Ken: More films, that’s about it.

Chris: You’re a visiting professor – maybe I shouldn’t expect a ready-made philosophical soundbite from a rebel?

Elize: More fantasy, less reality. We like Lobster (I don’t know this movie). And he’s in Mr Nice (which I’m going to see later today). It’s a cameo in the scene where Rhys is going over the border and there’s a line of cars. Showing a passport in one of them is Ken. (I wasn’t certain, later watching the film, if I saw him in a car, but I feel fairly sure he walks across the background in that sequence.) He also played a Professor who interviewed him for his entry to Oxford but that bit was cut.

Chris: And you had a cameo in Savage Messiah?

Ken: Yes, I was on the platform.

Chris: Do you have any regrets?

Ken (pausing for thought, or maybe so I will know he is being serious): No.

Chris: When people look back on your work, what would you hope they will particularly remember?

Chris: The Niebelung has been cited as one of your early influences. But you never made the Wagner biopic?

Elize: He did in a way, with Strauss.

Ken: That’s not Wagner. Yes, I was a big fan of Wagner.

Chris: What about the Andy Warhol screen test?

I sense we are going to get about as much on his meeting with Warhol, and those famous five-minute ‘screen test’ projects (where famous people just stared motionless at the camera for five minutes), as we did with his thoughts on Wagner. But I’m the last of his interviews and feel in all consideration it’s maybe time to wrap up.

Ken whistles a few notes until Elize and I collapse with laughter again.

I don’t know if we’ve got any closer to the real Ken Russell. I exit the Caledonian Hotel realising I had better write a review of Savage Messiah. It rather feels as if I have just interviewed one. Though a rather nice man, not at all like his confrontational image. Or perhaps just a little less savage with his advancing years.

Black Holes: The Edge Of All We Know Dementer The Dissident Eye Of The Storm Iorram Justine Lucky Night Of The Kings Notturno Poly Styrene: I Am A Cliché The Stylist The United States Vs Billie Holiday

Out Of The World Angelou On Burns American Badger Sir Alex Ferguson: Never Give In Vicious Fun The Old Ways There Is No Evil Rosa's Wedding The Woman With Leopard Shoes City Hall Justine Voice Of Silence Wildland The Last Forest I Care A Lot What Do We See When We Look At The Sky? Sweetheart Handsome A River Runs, Turns, Erases, Replaces Bloodsuckers