Eye For Film >> Features >> A Nice night out

A Nice night out 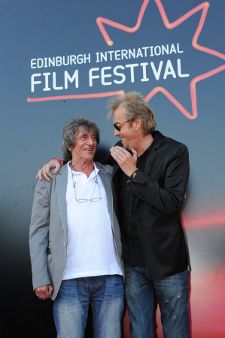 It seems somehow appropriate that when asked to introduce the European premiere of Mr Nice at Edinburgh Film Festival, the subject of the film Howard Marks said: "I do want to say a lot - but I'm totally incapable."

The film - directed by Bernard Rose - is an adaptation of Marks' book, which charts the path he took from Wales to Oxford to being one of the most infamous drug-smugglers of his day. Although the portrayal of Marks as sort of latter-day folk hero will not be to everyone's taste, Rhys Ifans is perfectly cast in the title role. And it turns out that he and Marks have known one another for years.

Speaking to a packed audience following the film's European Premiere at Edinburgh Film Festival, Marks explained that he had met Ifans when he had approached him with a packet of cigarette papers and asked him for his signature. When Marks went to put his name on the box, Ifans said: "No. Every one." A friendship, it seems was born and Marks says there was never going to be anyone else playing him on screen.

He said: "We made a very very firm agreement - this was before I wrote Mr Nice and it had been published and before Rhys had become an actor - that, should I ever write a book and should they ever make it into a film, that Rhys was going to play me. That was absolutely the case and we still have video footage of that. So we knew we were going to do it a long time ago."

Ifans agrees, saying this was one of the reasons he felt comfortable taking on the part.

"It should have been traumatic and complicated but it wasn't," he said. "That's kind of a testament to how long I've known Howard. It was just skin up and don't forget your lines. I've known Howard for 14 and 15 years. Welsh heroes are few and far between and when they are heroes they are usually good at running or singing. So when Howard showed up it was heaven sent. A huge circle has been completed with this film. We come from a long line of pirates, all of us."

Since the film contains a lot of marijuana smoking and trafficking it will doubtless prove to be controversial when it hits cinemas on October 8. Director Bernard Rose said it was very important to him not to take a moral stance in the film.

"I think that one of the things that was important to me when I was making the film, was making sure it was non-judgmental," he said. "People have very emotive reactions to the idea of drugs when, of course, it's just a part of everybody's life. Ultimately, there really are two issues that the film deals with. One is the issue of legality and the other one is the issue of addiction and they are two completely separate issues, because many people are addicted to legal drugs, as many people who are addicted to illegal drugs. These two issues get confused. I thought that Howard's story elaborated on that.

"Certainly, it was a problem when I was initially developing the film with the BBC. And whether or not they were interested in making it would depend on what the then Government thought that week. When they were going to decriminalise it they were going to make the film and when they were going to re-criminalise it they moved away from it again. It became pretty obvious that they were never going to make the film because they thought they were going to upset somebody and lose their job, which is, you know a fundamental motiviation of anybody with a nice job like that - not to lose it. So people don't want to be seen to be approving. I don't think the film approves or disapproves. There are plenty of films about bank robbers but that doesn't meant that we have to say bank robbing is okay. But I was very keen not to take a moralistic stand with the whole treatment of what happened, because I just think it's wrong and not the point, the point is, what happened."

What seems more important to Rose is the idea of the book and film offering a snapshot of a time period.

"I thought Howard's life seemed to catch on to a kind of history of the second half of the 20th century. An untold one. A history which goes unacknowledged. I thought Howard's book was just really honest about what really happened and what the history was. It was a story worth telling."

One of the most noticeable aspects of the film is it's 'look', with the style of film used changing with the time period, to give a sense of place.

"Because the film takes place over 25 years, I made a decision very early on that I wasn't going to have a title card that said Kabul, 1973, 5pm. Because there would have been a title on every single scene," said Rose. "So I worked very hard to try to make you aware of what year it was and where you were rather than just 'a title', which is the lazy way of doing it. Every television show have that sort of title in every other scene. But it's actually a lot more difficult to do than you would think. One of the things that I decided early on was to denote the year of the film by the texture of the film. The past is gone and our only experience of it now is what the artifacts of those particular moments look like. So, the texture of the film changes as you go through the periods, from 4x3 black and white, 16x9 black and white, to faded, kind of Seventies colour. Then it gets to the Eighties and becomes more video looking.

"Obviously, I used a lot of archival footage mixed in there and that kind of dictated to some degree what each sequence would look like. It was just a way of approaching it that seemed to make sense because otherwise there was no realy way of showing this huge passage of time. I think it's a very important part of Howard's story that when he started doing this, it was in an era of innocence in terms of the whole idea of narcotics. This wasn't some sort of street corner thing. This was a bunch of people in Oxford. These were the most educated people, the people who were trying to form in a utopian and idealistic way, a new society and they couldn't understand why anyone wouldn't want to try these new things. And you see by the time you get to the Eighties and Regan and the war on drug selling and the world changes. Much of the film is about the passing of an era and I wanted to describe that in the texture of the film rather than just rely on title cards."

The Q&A was lively and good-humoured throughout, but it was probably Marks who - when Rose mentioned bank robbers - stole the comedic moment of the night, adding: "I think banks have robbed more people than people have robbed banks."

He may still be an advocate for legalising drugs, but when it comes to a quick one-liner, he doesn't let the grass grow under his feet.