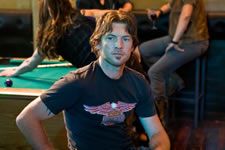 According to Sam Worthington, star of Avatar, these were the words of a random hiker in the Hawaiian rainforest when he passed Worthington and co-star Zoë Saldana running about dressed in little more than 'dental floss' undergarments, and realised that the man shooting their semi-nude capers with a Handycam was none other than the multiple-Oscar-winning director of Titanic, James Cameron.

Joined for the Avatar press conference by their co-stars Sigourney Weaver and Stephen Lang, producer Jon Landau, and writer/director/editor/producer Cameron himself, Worthington and Saldana explain that their Hawaiian visit was, in fact, merely part of the film's pre-production process, inuring the actors to the actual feel of a jungle before they moved to a blank studio space where all the gestures and expressions of their performances would be digitally captured for subsequent CG rendering as giant anthropoid aliens with tails.

The cast certainly do not consider Cameron to have "gone downhill". "It was something so new, so beautiful – and it looked so much like us, it was kind of magical," says Saldana of the experience of seeing the finished product. Worthington admits he was initially worried that the nuances of real performance would be lost in their digital translation, but can now recognise in his on-screen avatar "every glimmer in my eye, every smirk, every goofy walk… You're not seeing big blue people – you're seeing the spirit of us."

Weaver adds, "I was ten-foot tall and blue – it's a much-improved version of myself, and 30 years younger and can leap tall buildings at a single bound. It was wonderful having a double-life as a character and seeing it realised so wonderfully by Jim and WETA."

Weaver, of course, has experienced personally what she calls "several revolutions" in special effects, and she considers "this one, leading us to Avatar, to be the biggest." When she was involved in the first Alien back in 1979, she claims that it was "literally a few hoses and things like that made those SFX". By the time she shot its 1986 sequel Aliens with Cameron, green screen had taken over, but she suggests that "green screen is harder for actors", and she far prefers the greater freedom afforded by working in motion-capture suits and being able to see her own performance played back at once on Cameron's 'magic camera'.

"I'm so grateful," she says, "as an audience member and as an actor now, that we have a new technology where we can get at the heart – the essence, of the moment, the scenes - and leave it up to the geniuses at WETA to spend 50 hours per frame building on our true performances."

Cameron is equally passionate about the advantages of shooting with mo-cap technology. "It's probably the best director-actor relationship and working process I've ever been involved in," he says. "In the virtual working process, I'm not distracted by the lighting, the time of day, the sun setting - do I have to get the shot by 6.15?, and where's the dolly track going to go? - and the thousand questions that pull the director's mind away from the process of working with the actors.

"We spent all our time just looking for some sort of truth - you know, emotional truth, or the truth of the character. And then we'll go over and we'll huddle around the high-capture playback and so we can look at their faces. I won't see them as their Na'vi or their Avatar characters for months, even years sometimes, after they are originally captured, because the process takes so long – but, so long as I know, in that moment, that we got them, then I don't have to worry about it downstream."

Cameron regards the re-emergence of the 3D format as "a way to bring people back to the cinema, to make cinema exciting again." He elaborates: "There's an erosion of revenues because of file sharing, downloading, piracy, all of these things. This has so far been more or less balanced by the increase in international markets, Russia and China coming up, and India coming up, but we need something that kickstarts public enthusiasm for the cinema as an experience.

"As people seem to be going down to smaller and smaller devices and launching movies on iPhones, we've got to do something to reverse that trend or at least to balance it, so I've certainly set as my goal taking the movie theatre back to the sacred experience it's always been in my whole life, and 3D is part of that. It has to be used in balance with all of the other techniques of film, and I would say if one were to see Avatar not in 3D, it would still be beautifully acted, beautifully designed, beautifully photographed, etc. It's not like you're suddenly left with 50 per cent of the experience, but if you do want to see it with that sort of extra turbo-charger of an experience, and you want to pay a little extra to do so, 3D's the way to go."

The filmmaker is not unaware of the contradictions involved in using such high-end techniques to convey the ecological message of Avatar. "The film," he suggests, "espouses this love/hate relationship with technology. Obviously we use technology to tell this story that's a celebration of nature, which is an irony in and of itself. It's not that technology is bad, it's not that a technological civilization is bad, it's just that we need to be in control of the technological process.

"We're not going to be able to just rip our clothes off and run back into the wilderness - first of all, there's not a whole lot of it left, secondly, that's not going to work for about eight billion people. So we're going to have to think our way out of this, we'll have to do it using technology and using science, but we're also going to have to be very, very human about it, and get in touch with our emotions and get in touch with our understanding of each other. Part of one of the themes of the film is symbolised I think by the fact that it begins and ends with the main character's eyes opening – it's about a change of perception, and about choices that are made once our perceptions have changed."

Questioned about the ideology of a film in which shock-and-awe campaigns, pre-emptive strikes, martyrdoms and talk of fighting 'terror with terror' abound, Cameron denies any specifically party-political agenda. "Obviously there's a connection to recent events, and there's a conscious attempt to evoke Vietnam-era imagery, with the way the guys [in the film] jump off the helicopters and so on. It's a way of connecting a thread through history.

"I'd take that thread farther back to the 17th and 16th centuries, to how the Europeans pretty much took over South, Central and North America and displaced and marginalised the indigenous people there. I think there's just this long, wonderful history of the human race, going back as far as we can remember, to the Roman Empire and farther than that, where we have this tendency to just take what we want – without asking, as Jake [Worthington's character in the film] says – and I see that as a broader metaphor, not so intensely politicised as some people would make it, but broader in the sense that that's how we treat the natural world."

And can we expect an Avatar sequel, or even a franchise? Cameron points out that "all these CG mountains and plants and trees and leaves and flowers and buds and creatures – I mean, everything that you saw up there on the screen - had to be made by people at workstations over a period of years, and so it had value". Part of Cameron's original pitch to Fox to make Avatar was that all these expensive assets could eventually be amortised and recycled in sequels, and, as he says with a lingering sense of incredulity: "They bought that - so I figure I'll have to make a second one now, but that'll only happen if the first one makes money, so we'll see, we're still throwing the dice at this point. I have a story worked out for the second film, and the third film, but my lips are sealed."

For now, Cameron is just delighted that Avatar is finally out there. "There's been a huge buzz about this thing, so now it's just a relief to let people actually see it, and quit talking about it… to get the rumours put to bed by actually dealing with the movie itself."

So there you have it: the Avatar hype stops here.

Avatar is on general release across the UK from December 17

Be Natural: The Untold Story Of Alice Guy-Blaché Bombshell A Hidden Life Just Mercy Midnight Traveler A Serial Killer's Guide To Life Weathering With You