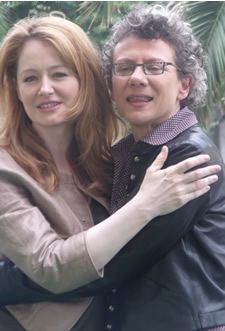 The heavy pall of cloud that seems to have been hanging over San Sebastian since I got here, seems to be lifting as my last day dawns... still, at least the weather has provided good encouragement to sit in cinemas rather than on the beach.

I had the chance to speak to Blessed director Ana Kokkinos and actress Mirando Otto about their film, which at the time of writing has just won a jury prize for best screenplay (read about that and the other winners here. I ask Kokkinos about the difficulties of lifting the script from the stage play on which the film is based and she tells me it was a long process, during which they took the decision to leave much of the stage play behind and to restructure the action of her film - about teens and their mothers - so that it focuses first on the childre and then on the adults. I ask how the premiere of the film went in town and she says that she was incredibly moved by the reception it received - a five-minute standing ovation.

Otto is also full of praise for the crowd, and the director and says she particularly loved the fact that Blessed came with a long rehearsal period. We'll be bringing you the rest of the interviews in due course.

My penultimate film of the fest is Rachid Bouchareb's London River - which netted Sotigui Kouyaté the Silver Bear for acting at this year's Berlinale. Although Boucharib wasn't in town, Brenda Blethyn, who co-stars in the film centring on the aftermath of the London tube and bus bombings of 2005, was on hand to introduce the film.

She revealed that when she was first approached by her agent to do the film and was told it was a French director "I was surprised, because I don't speak French. Well, I didn't". She also told how Bouchareb waited a year so that she could take on the role of Elisabeth - a mother who fears her daughter has been killed in the bomb attack - in the film. However, wait they did and in the end, the veteran Brit learnt French for the part, which sees Elisabeth form an unlikely bond with Kouyaté's French-speaking character Ousmane, who also fears his child has died in the tragedy.

She adds that she hopes the audience will find the film "moving" and it is certainly very heavy-hitting in the emotions department. In some ways, however, it is so unremitting in its portrayal of Elisabeth's despair and fear that you almost become inured to it by the halfway point and the presence of multiple endings is a shame. That said, Boucharib proves adept at personalising the ideas of tragedy and of exploring the notion that someone as close to you as a child can grow imperceptibly into a stranger without you even realising it. He also avoids the sort of shock tactics and polemics that marred the similarly themed Incendiary to explore how fear eats the soul and how can lead you to jump to the most horrific conclusions with only the skimpiest of evidence.

I wrap up my San Sebastian 2009 experience with French-Japanese co-prodution Yuki & Nina. The story of the Japanese/French Yuki and her best French pal Nina, it starts brightly with some lovely dialogue between the two girls as Yuki discovers her mother is to split from papa and head, with her, back to Japan. The film is co-directed by Hyppolyte Girardot (who also plays Yuki's pere) and Japanese arthouse director Nobuhiro Suwa and, sadly, the end result feels as though it has a split personality. Where the early scenes have a naturalism, energy and ring of truth, as the story progresses and the two children runaway to the woods, the film, like Yuki and Nina, begins to get lost. Where early scenes invited us to connect with the children from the half way point, the directors seem intent on pushing us away from the emotion. So, while the first half has all the makings of an accomplished short film, the second portion feels almost entirely surplus to requirements.

My favourite film of the festival remains The Secret Of Their Eyes, while The White Ribbon, Northless and Together will also linger long in the memory... although perhaps not quite so long as that lovely acceptance speech by Sir Ian McKellen yesterday. And as I look back on a week of above average cinema in beautiful surroundings, I can't help thinking he won't be the only one who hopes to be back.

God Exists, Her Name Is Petrunya Father Of The Cyborgs The Hitman's Wife's Bodyguard Our Own The Foundation Pit Yellow Cat A Crime On The Bayou All These Sons Scarecrow Munyurangabo Sing, Freetown School's Out Forever Zanka Contact Being Thunder Agony Ellie & Abbie (& Ellie’s Dead Aunt) The Return: Life After ISIS My Wonderful Wanda Charm Circle Death On The Streets