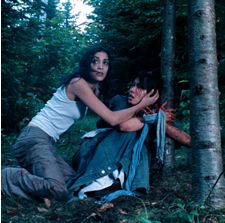 Since its Cannes premier last year, Pascal Laugier’s deeply disturbing horror film, Martyrs, has been the controversial talk of the town. Starring Morjana Alaoui and Mylène Jampanoï, it tells the story of a (possibly) abused young girl who seeks a terrifying revenge on her (possible) abusers. With reports of audience members fainting, vomiting and hurling verbal abuse at the director during festival screenings, Martyrs has quickly become the must-see horror movie of the last 12 months. With the film about to be unleashed across the UK, Eye For Film spoke to director, Pascal Laugier, about his hardcore horror.

How did the idea of Martyrs idea take shape?

I don’t know precisely. I think that if we knew where the idea had come from we probably wouldn’t have done the film. What I can tell you is that I started to write the script by thinking about the revenge sequence, the girl knocking at the door and killing the members of an apparently regular middle class family. From that starting point I thought about the path of the character and the consequences of her actions. Little by little, I got the whole story. The more I was writing it and the more I realised how violent and brutal it was, I started to realise at the same time that the violence and the brutality was the point of the film.

You’ve previously mentioned that the film reflects what kind of man you are today. How so?

When I wrote the script I felt very dark on an intimate level. I was very receptive to the violence of our times. I had a sad feeling that we are living in brutal times right now, and for me it was a way to use the horror genre to express myself onscreen. I didn’t want to have any kind of distance between me and what I was writing. I wrote the script in a very melodramatic way, feeling very close to my main characters.

It’s a very difficult film to watch. Was it your intention to raise the bar in on-screen brutality?

The film very much feels like a movie of three acts...

Yes, absolutely. I always saw the film as three acts. I was very scared when shooting the transition between acts because I knew there was some very fast and rewarding parts of the film, and I was really more focused on how to go from one act to another. My goal as a narrator was trying to surprise the audience, and I wanted to do an unexpected movie. I liked the idea that after a while, the audience would wonder, ‘What am I fucking watching?’

It’s an effective technique that also makes the film very difficult to categorise, which is a good thing...

Yeah, I think so. When I was younger and watching a lot of horror films in the Seventies and Eighties, whether they were European, American or Asian, I loved the fact that the genre was a very free and very experimental one. Today, as a horror fan, I was starting to think that the genre was more harmless and formulaic than the other genres. I felt very annoyed by it, and very modestly, I tried to bring something unexpected and something fresh.

Has there been any recent horror that has excited you?

There are a lot of very gifted newcomers. Maybe it will surprise you but I am a very big fan of M Night Shyamalan. I don’t agree with him politically, and I'm not always okay with what he says about the world and humanity, but I don’t care. On a cinematic level, I admire him because like John Carpenter, like Dario Argento, like Polanski and like all the guys I was admiring a lot, he uses the genre to express himself. He’s not talking shit. He doesn’t take any distance from the stories he tells. He doesn’t do films to show us that he is cleverer than the story he is telling.

The times we are living in right now are so cynical, and being a cynical guy is being cool – I hate that. For me, cynicism is the end of everything. When I go to watch a movie, I need the director to have a strong faith in the story they are telling me. I want to believe in what I’m told. That’s why I hate directors that make films that show us that they have the same collection of DVDs as the audience. I like first degree directors.

With Martyrs, did you have problems with censorship?

I know this film has shocked some members of the commission, both those people are not my friends, so am I happy to have shocked them [laughs]. It created some small scandal in my country. We were supported and helped by a lot of people, and finally we won. We got a normal rating, ‘forbidden under 16’, and finally we were to be released on 60 prints in France. It’s not a lot, but it’s better than nothing.

Having screened it at various festivals and so forth, what has been the general reaction to the film?

It’s very individual. That’s something I’m very pleased about. Some horror fans hated the film because it didn’t deliver what they expected from a regular horror film. Some of the more general audiences were moved by it and the opposite is true too. Everything is okay with me. I am very aware that the film sends so much bad energy to the audience. It’s so nasty, so depressing and so sad. I find that it’s very legitimate that some people hate the film.

There seems to be a new era of hardcore French horror, with films like Haute Tension, Inside, Frontier(s), and now, even more so, Martyrs. Why is this?

I think it’s a matter of frustration. For years we couldn’t find funds to produce films, and now that’s starting to be a little bit more possible. It’s a kind of frustration being unleashed. In France we are living in very brutal times, and one of the ways to talk about the brutality of our times is to reflect that in horror films. That’s one of the things that horror has always done, trying to be like a mirror of its time. Honestly, I don’t see any reason right now to do soft films. The very idea of doing a romantic comedy right now, disgusts me totally.

Many new French horror directors are being plucked for Hollywood, including yourself with Hellraiser?

Yes, it’s true. I’m not sure it’s going to be my next film. Right now it’s too early to tell you more. I have signed for three different films for three different studios in Hollywood, but, you know, I’m not 20 any more, I’m 37 and I know that Hollywood is full of traps. If you would have asked me a few years ago, I would have said that I wanted to stay in my own country because this is where I can do my films, and I think that the French system needs to be more than the Hollywood system, and I still think that.

But, you have to realise, after Martyrs, I was proposed one project from France, and 50 projects from America. So after a while, you go to people who desire you more. You go to producers who tell you they like your work. You have to be liked to be able to do films, to be appreciated a little bit, and it’s still not the case in my country.

In regards to your other future plans, can you tell us about the Dogs project?

Yes, it’s one of the exciting projects I have signed. It’s a great script that I received. It was a page turner. It’s a very classic, basic thriller. It’s a cross-over between horror, suspense and drama. It’s really cool. It’s like Cujo, but with 30 dogs instead of one. It’s really interesting.

Finally, there’s been talk of an American remake of Martyrs?

Yeah, the remake rights have been bought by an American producer. They asked me to write and direct it but, of course, I refused because I already spent two years on this project and it’s more than enough. I’m very glad it’s behind me know. Probably they won’t shoot the end 25 minutes in the basement the way I did, but I’m flattered to be honest. But artistically, I will have nothing to do with the remake.

Martyrs is on release at selected cinemas in the UK from March 27 and will be released on Optimum Home Entertainment DVD and Blu-ray on May 25.
Share this with others on...