The International, Eden Is West and a press conference with Costa-Gravas and Riccardo Scamario 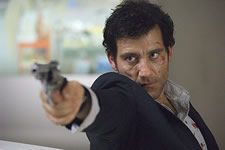 Clive Owen in The International

Darren writes: Last night we finally managed to see The International, a political thriller directed by one of Germany’s favourite sons Tom Twyker. I'm a fan of Twyker and the movie's premise - an interpol agent and a lawyer try to uncover a banking scandal - was interesting. The end product, however, was a tad overlong and featured a by-the-numbers performance from Clive Owen. This location hopping thriller was not the big US breakout film for its director it promised to be and I can't help wishing he still chose artier fare. Gone are the interesting angles and film-making innovation, to be replaced with a "get the job done move to the next location" attitude.

The closing competition film was Eden Is West - one of Adam's picks, not mine. It turned out to be a wise choice and, unexpectedly, my favourite film of the festival. The story of an illegal immigrant who goes on a quest to seek out a better life for himself, his destination of choice is Paris and what unfolds is the story of how he gets there and the people he encounters on the road.

It is a very topical and important film, and worthy of your time. It features great performances, including a star-making turn from Italian actor Riccardo Scamarcio, a name unfamiliar to most English-speaking audiences.

We ended the festival with an interview with the man himself, which turned out to be my first proper interview. Present in the Palast lounge was Scamarcio, Adam, myself, an interpretator and a PR agent. It was my first dealing with stars and the hysteria that comes with doing interviews. Firstly we had 20 minutes with the star as a group meeting, then we had an individual interview which was cut first to 10, then whittled down to around 8.5 minutes.

Before we kicked off we were informed by the interpretor that Scarmario didn’t like doing interviews in English but, seemingly won over by our British charm, he conducted almost all the interview entirely in the language. He was a really nice guy, extremely friendly and even answered an extra question I slipped in before his publicist called time on us. I told him that today was our last day and that we enjoyed the film which he replied hoped would come to the UK and do well there. I smiled, shook his hand and got up very satisfied with the final outcome of my first ever international interview with a very famous Italian actor.

Adam writes… Following on from the screening of this excellent film, we attended the press conference for Eden Is West, which included both director Costa-Gavras and the main star, Riccardo Scamarcio. When reminded by one of the journalists that yesterday was his birthday, Costa-Gavras quipped: "Every time I come here I get a little bit older. I’m going to have to ask them to change the dates!"

The film’s central theme of immigration was clearly close to the hearts of both director and lead actor, as Gavras reminded his audience of the way that immigrants are being used as a scapegoat for wider social problems. "We have this image of a flood of immigrants sweeping into the country, but if you look at the problem of one person, one individual then suddenly everything changes." Nevertheless, he also pointed towards the film’s lighter side, stating: "This film is a kind of fable" and saying that, above all, "I wanted to make a film about kindness."

Costa-Gavras discussed the influence of silent cinema on the hero, Elias, in particular Charlie Chaplin’s Modern Times. Scamarcio responded by joking he " wanted to walk like Charlie Chaplin but he (the director) wouldn’t let me do it!"

Our last act of the festival as journalists was to interview charismatic Italian heartthrob Scamarcio in the afternoon. As Italian stars go, your humble reviewers would have preferred Monica Bellucci, but he was certainly an entertaining alternative!

A very exciting way to end the festival as made our way through the requisite PR hoops and waited our turn as Riccardo had a cigarette break. There were a few nervous glances as our 20 minutes were reduced to ten and then we were informed (despite several emails confirming the contrary!) that Riccardo wasn’t fond of speaking English. Fortunately, this wasn’t an issue in the end and, despite the PR communication problems, he was a very amenable and interesting interviewee with a very good grasp of English. Once the interview was underway, the PR people tried to cut our time down to a mere seven minutes, but with some clever questioning and a carefully cultivated rapport with the man himself, we were able to squeeze an extra couple of minutes on the end.

Watch this space for the complete interview, coming your way as soon as I get back.

Read about the festival winners here

Take That Cannes! Hit band hit the festival to promote The Greatest Days