The controversy over Blindness and what it tells us about blind people and the film industry. 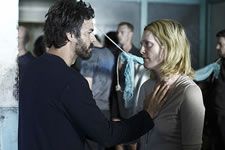 This week sees the arrival in cinemas of Blindness, an adaptation of José Saramago's best-selling novel, helmed by City Of God's Fernando Meirelles. But this is a film which has already attracted protests in America, where the National Federation of the Blind has expressed concern at the way it represents blind people and the effect this may have on their lives. So what is all the fuss about, and is Blindness a special case or just a fresh illustration of an ongoing failure of cinema to consider minority groups?

Blindness tells the story of a sudden plague, a virus that causes almost everyone it comes into contact with to lose their sight. The first group of people affected by it are quickly placed in quarantine. They include a doctor who has become infected whilst trying to treat people, and his wife, who is actually immune, but who pretends to be blind so she can go with him. It is this group we follow as they find themselves isolated and unattended, struggle to come to terms with their situation, and try to work out how to move forward in a world which has changed dramatically.

"Saramago and the movie makers portray blind people as helpless, terrified subhumans who need to be taken care of by the sighted," says NFB spokeswoman Donna Hill. "This representation of blindness is contributing to the bigotry and oppression of actual human beings. Human beings who are more likely to be unemployed, live in poverty and experience criminal violence."

The NFB and others have been particularly critical of the film's focus on the Doctor's Wife (none of the characters are named) who, during the course of the story, comes to feel that her sightedness gives her new responsibilities, and emerges as a leader. This represents a shift from Saramago's novel, which offered more points of view, and it can be seen as perpetuating the idea that blind people are dependent on sighted people to lead them around and cater for their basic needs - in fact, most lead fully independent lives.

One character in the film, known as Man with Black Eye Patch, functions as a sort of go-between. As well as keeping the quarantined group in touch with the outside world through his stories, his experience of being half blind before the epidemic acts as a bridge between the blind and sighted worlds. But this is perhaps a bit misleading. Being half blind does not, in most circumstances, prevent a person from approaching life the same way as people with full sight, at a practical day to day level. What might have been much more interesting would have been to see how a character who was completely blind - and long used to it - might function in this situation.

That would, of course, be another story, and Saramago has chosen his story carefully, not because of his feelings about blind people but because he wants to use blindness as a metaphor for the way human beings often fail to perceive their interdependence. The NFB argue that this is inappropriate at a point in history when blind people still have so much prejudice to overcome, but is this the fault of the film or, at a wider level, of cinema in general? It's difficult to know where to place blame for problems represented by absence, but anyone can see that blind people (like a number of other minority groups) are seriously under-represented at the cinema, and that what representations there are very often do show them as dependent and socially vulnerable. They are usually minor characters and are often little more than ciphers, useful to he plot without having any narrative direction of their own.

There a few exceptions to this. Jocelyn Moorhouse's award-winning 1991 film Proof centres on a blind photographer who leads a complex independent life, Scent Of A Woman features a blind man who can teach his sighted young companion a thing or two about impressing the opposite sex, and who could forget the bold, young blind heroine of The Village? Manhunter and Red Dragon both took an interesting blind character from Thomas Mann's book and preserved her complexities - there's certainly more to her than there is to the average woman in a serial killer story. And the martial arts genre has a long history of films with blind heroes, based around a genuine tradition of self-defence (and sometimes assassination) skills developed specially for blind people 2,000 years ago in China, when their independence was taken for granted.

The problem is that, despite these efforts, blind people continue to be pretty much invisible in mainstream cinema - and their absence from the industry is part of the problem. All of the actors involved in Blindness - including its several hundred extras - were sighted, and had to be trained to act like blind people. Yet there are many blind actors out there looking for work, including people with experience of going blind suddenly, who might have contributed usefully to the production at several levels. Although sighted people might find it surprising, there are, in fact, blind people with a wide range of skills normally used in the film industry, and blind people do go to the cinema (some cinemas, like the GFT in Glasgow, offer an audio captioning service to enrich this experience).

There are 157,000 people in the UK who are registered as blind, and many thousands more with severe visual difficulties. No doubt many sighted people who go to see Blindness will find themselves wondering what it would be like to be among them. It could be a whole lot better if cinema would take a positive lead.