Eye For Film >> Features >> Back from the dead

Back from the dead

After a lacklustre horror showing at festivals in the first half of 2008, the FrightFest all-nighter proves there's life in the corpses yet. 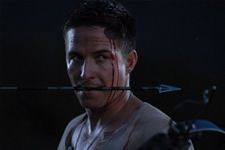 Remakes, rehashes and reimaginings have increasingly taken over, originality has become ever thinner on the ground, and the annual August Bank Holiday FrightFest, usually an accurate barometer of the current status of horror, was a decidedly lacklustre affair in 2008, offering only a few really outstanding films in a sea of derivativeness and mediocrity. Still, such a doom-laden prognosis for the genre might be premature after all, at least if one is to judge by the stimulating selection of horror films just screened by FrightFest as part of a Halloween-based all-nighter on November 1 at the ICA in London.

The event's only real disappointment was its first scheduled film, Gregory Mandry's Gnaw, which at least served to exemplify what has recently been so wrong with the genre. Yet another tale of young urban co-eds falling victim one by one to a sadistic cannibal butcher (or two) out in the sticks, it tries and fails to cover over its lazy writing, poor acting and dearth of ideas with literal bucketloads of gore.

There is no shortage of recent filmmakers who have cribbed their ideas wholesale from The Texas Chain Saw Massare (1974) while failing to realise that what made Tobe Hooper's classic so great (apart from its originality) was the director's preference for unnerving suggestion over explicit scenes of torment. The bloody, torturous imagery of Gnaw is unlikely to inspire horror, shock or even mild disgust in anyone who has been following the last decade's worth of the genre – for such responses are impossible for jaded viewers, who feel they have seen it all many times before. Unlike its malicious tool-wielding antagonist, Gnaw simply fails to make the cut.

Fortunately the next feature for the day, Mark Tonderai's debut, Hush, could not have offered a more marked contrast. As a young couple (William Ash, Christine Bottomley) driving late at night on the motorway get drawn into a game of cat-and-mouse with a truck driver, the film uses loving references to Duel (1971), Roadgames (1981), The Vanishing (1988) and Octane (2003) not so much to affirm our expectations as to play with them like a cat.

Tonderai, who also wrote the screenplay, has a sure grip on his film's economy, investing even the most throwaway of background details with a significance that takes a while to become apparent. Most importantly, he is a master-builder of atmosphere, character and nail-gnawing suspense, in a film so taut and tense that comparisons to Hitchcock, though something of a cliché in film criticism, this time seem entirely apt. Clearly this new director is one to watch.

Before the film started, actor Andy Nyman treated the audience to a hilarious making-of film, documenting the behind-the-scenes efforts that went into his decapitation scene in Charlie Brooker's zombified Big Brother satire Dead Set, and showed off the grizzly model of his screaming head (complete with trailing spinal column).

If John Harrison's The Book Of Blood is closely adapted from Clive Barker's short stories, On Jerusalem Street and The Book Of Blood, then perhaps that explains why, by the end, it feels as though it might better have been a short film or two than a fully-fledged feature. An expository monologue about the highways and intersections travelled by the dead, while at first hauntingly enigmatic, seems by its third or fourth verbatim repetition to provide little more for the film than padding.

Still, this is a cruel, twisted and erotically charged ghost tale whose only real precedent is Clive Barker's own Hellraiser (1987). The performances are solid, the Edinburgh setting eerie and gothic, there is some stunningly well-judged CGI (how often do you hear that?) and some genuine frights - and it stands out by doing something different. So while The Book Of Blood may not have been perfect, it was the cinematic equivalent of a page-turner, worthy of more than a mere skim for those who like their horror on the dark side of macabre.

There followed a wonderfully demented short film, Jason Eisener's Treevenge, currently earning itself well-deserved acclaim and buzz on the festival circuit. Essentially the story of mistreated Christmas trees branching out into gory acts of vengeance upon their yuletide persecutors (chiefly scornful lumberjacks and Christian families of all social classes), it is a genre-savvy pantomime of arboreal crime and punishment – and for those who do not speak tree, the pines' dialogue is conveniently subtitled.

Kids, eh? Half the time you love 'em, the other half you just want to kill 'em. It is a principle borne out by the evening's 'surprise film', revealed, just moments before it screened, to be the world premiere of The Children. The title alone probably suffices to indicate where the film is headed, but this update of Village Of The Damned (1960) and Would You Kill A Child? (1976) to our own virus-obsessed times is damn-near perfect in its execution, confirming the deftness with morality's outer edges that director and co-writer Tom Shankland demonstrated in his debut feature WAZ (2007).

Two related families are celebrating New Year together at a large country house, surrounded by snow, when the palpable tensions both within and between them are brought to a head by the most unlikely antagonists, turned against their own parents by a mysterious and fast-spreading infection - or have the impressionable little ones just been watching, and learning lessons from, the domestic dysfunction around them? Shankland allows the tension in his film gradually to build from the smallest of beginnings to apocalyptic levels, while distressing his characters and viewers alike with dilemmas that are not merely moral, but challenge our fundamental genetic programming. It is alarmingly creepy, and all the more so for the filmmaker's relative restraint.

As the witching hour neared, there was an entertainingly shambolic horror quiz on stage - where else but FrightFest would you find someone able to cite accurately from memory the full titles, directors' names and release years of every Nightmare On Elm Street film to date? There followed the night's second, more disposable short film, Emilio Ranzani's Langliena: Una Storia Macabra – and then a special screening of the new HD restoration of Escape From New York (1981).

This was introduced by none other Neil Marshall, whose own latest feature Doomsday (2008) paid considerable homage to Carpenter's film, and who made no secret of his personal excitement to be seeing one of his favourite VHS-age films on the big screen for the very first time. Still, if truth be told, viewing the film today is akin to having one's sense of youthful nostalgia violated. Many of the faults here (chiefly the terrible dialogue, patchy pacing and silly costumes), so easily overlooked during one's wild-eyed teen years, now seem so much more obvious and distracting, so that while perhaps the film remains a classic, it no longer seems a timeless one. What is more, whether the error lay in the restoration process or (as is more likely) in the ICA's sound system, there was no escaping the annoying digital distortion on the remastered soundtrack.

When it comes to cultish genre celebrity, Bruce Campbell has it all. As the long-suffering protagonist of the Evil Dead trilogy, he has taken endless demonic onslaughts on his outsized chin; as a star of more B-grade schlock than most fleapits would show in a decade, he acquits himself with an old-fashioned sort of derring-do and a twinkle in his eye; and his cameos are quite simply the very best thing about all three Spider-Man films. So news of a postmodern comedy directed by Campbell, in which he would play himself (and still get to kick monster butt), was music to any self-respecting horror geek's ears.

Trouble is, though, that no matter how much Campbell fans may like the amiably daft and cheesy My Name Is Bruce, they would probably prefer to be liking it a little more – and about half of the UK's membership in that particular demographic was present at this premiere screening. To everyone else, it will be like watching a foreign-language movie in its home town without the subtitles and wondering what has got all the locals laughing. Although, trust me, even the in-jokes here are a bit hit and miss.

It is all carried by the affection of its own niche market (and much of the film is actually about that niche market), but in the end such affection is not quite enough to bridge the gap between this slice of dumb-assed self-referentiality and the clever-cleverness to which it aspires. Campbell himself, however, is as sporting as ever – and it is better than the similarly titled (and similarly postmodern) kung fu comedy They Call Me Bruce? (1982).

By now it was 4.30am, and FrightFesters hoping for a couple of eye-openers to keep them lively and wakeful for the rest of the event were about to have their prayers well and truly answered. Toby Wilkins' Splinter is a hostage drama, a nature's revenger, a siege flick and a gore fest all at once. Its greatest strength, however, is its focus on characterisation, so that for all the monstrous goings-on at the periphery, the human element always remains at the centre to keep the viewer involved and amused – while the parasitic creature itself is totally original and terrifyingly realised. While hardly an important film in the annals of horror, Splinter is well crafted, engagingly performed and thoroughly likable from start to finish - and its menace is always just mad enough to keep the heart pounding.

Much like at last year's Halloween FrightFest all-nighter, which closed with Alexandre Bustillo and Julien Maury's astonishing maternity shocker Inside (2007), here, too, the very best was reserved till last, and those who had stayed the distance were rewarded with perhaps the finest horror film to have been made this year. To say that the latest from James Isaac (whose previous features have been the space-set Jason X, and the execrable Skinwalkers) begins with a veteran hunter being pursued and attacked in the woods by an unseen behemoth with the unmistakable snort of a hog, would be to conjure the spectre of Russell Mulcahy's Razorback (1984) – but Pig Hunt is so much more than just a cheap porcine creature feature.

In fact, the crazy yet utterly coherent way in which Isaacs keeps wrong-footing the viewer is half the fun. On the one hand, it is a monster movie through and through, but that hardly explains the masculine rites of passage, the Deliverance-style clash of urban and rural, the naked hippie psychedelia, the Orwellian allegory of human bestiality or, most crucially of all, the oblique but insistent exploration of the US' questionable embroilment in Iraq. To say much more would be to ruin the surprise, so let's just leave it at this: Pig Hunt is viscerally exciting enough to wake the dead, and yet politically and morally engaged enough to gore its way right into your brain. What more could anyone want from a horror movie? To quote one of the film's final lines (itself pointedly quoted from one George W Bush), "Mission accomplished".

So it might have been bleak at times, even despairing or apocalyptic, and certainly exhausting - but this marathon FrightFest event gave fans of the genre plenty of reasons to be cheerful. Apparently there is still hope for, if not in, horror.

Extraordinary fabulous moments Bruno Dumont on costumes, the cinematic expression of the narrative, and the internal self of France