Director Jia Zhang-Ke talks about the inspiration behind his fact meets fiction look at the lives of factory workers. 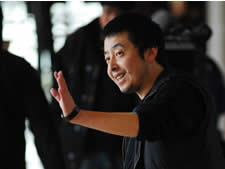 Sixth Generation director Jia Zhang-Ke has long blended fact with fiction in his work and never more so than in his latest film 24 City, which explores the experiences and memories of factory workers in Chengdu. He spoke about what inspired him to make the film at a press conference during the New York Film Festival and the edited highlights are below.

Can you talk a bit about how you came to make the film?

At first the reason I wanted to make this film was to reflect on this experience in a China going to a market economy and the lives of the workers and the impact that has on the workers. I started with documentary interviews of around 130 people and the more I interviewed, the more I think that there should be another component of the fictional characters in the movie to reflect on this particular era and that’s how I conceptualised the structure of the movie.

Can you talk about the mix of documentary and fictional elements in the film – the scripted and the non-scripted scenes?

I think the biggest decision for me was using actors to play “real” characters in the exact same format I used for the real workers I interviewed. The reason why I used this particular type of narrative is because I see history as a mix of reality and imagination and by using these two different types of formats I imply in this structure how I see structure. Also I need to have this fictional component because I need to tell the story of the 130 people I actually interviewed. Without these fictional characters I could not really tell all the stories and this was a good way for me to get this information out.

For example, the character played by Joan Chen. She actually is a concentrated character that comprises all the stories I heard from the middle-aged workers I had interviewed. So I somehow tried to use this fictional character to tell all their stories. To me, as I said before, history is a mix of reality and imagination. When you look back on a lot of novels in Chinese culture, they use a fictional story and characters, who somehow create an imagination of the time and a sense of history. I think that in order for me to get that impression across I needed to use fictional characters to build a bridge between reality and imagination

How difficult was it to research the film? Were people keen to speak to you about their experiences or did you find they were reluctant to talk about the factory and its impact on their lives?

At first it was a really big problem, because we approached these workers and none of them wanted to talk about it on camera. First I thought this was because they lacked the courage to talk about this in front of the camera. Then I realised it was not because they lacked the courage to do so but that they felt flattered – why are you interviewing me? I’m just this ordinary person without any story to tell, why don’t you interview someone else. So it’s almost like a sense of self-effacing gestures that they were giving.

Because most of people in China live in a collective society, the concept of individualism isn’t that strong, therefore, most of us conceptualise ourselves as part of a huge machine and we are just playing our part. The more I talked to the workers, telling them that I did want the individual stories to reflect their history and the time they have spent in the factory and it is important to document the individual memories of their lives. When they realised that was my intention, I got a better result with the interviews.

From beginning to end, how long did it take to make the film?

In total, about two years. The filming took a year and within the year I visited the factory more than 10 times. I first started thinking about the film in the year 2000, right after Platform, and I had a name for the film – Moving Factory. At the time, I wanted to focus and workers and on the change of policy from planned economy to market economy. But it didn’t work out. It was not until I learned about the fate of the factory, when you have 30 thousand workers who will disappear from history because of this transformation from a factory to this high-rise luxury apartment complex. For me I thought this was a time to record this part of history so that it can become a memory of the nation.

How was this film received in China and what is the audience in China for fiction and documentary?

At this point there have only been five screenings in China, back in May. Because of the Olympics it has been very difficult to arrange anything other than Olympic related events. Therefore we’ve decided to push this to next February so that it will have a major release in China.

In general the Chinese audience definitely prefer fictional features. It’s very hard and rare to see documentaries in major theatres, therefore I think people start to lose interest. Having said that, I think it’s very active in terms of documentary filmmakers – who have done a lot of great work since the 1980s – it is still going on but they have maybe not had the attention that they should have done.

Does your film have political implications?

It really reflects on how these people that are part of this planned economy. This idea of going through the socialism path, the idea of pursuing happiness and freedom and it was with all these ideals that they went into these factories. But in practice, it didn’t turn out that way. What you had instead is the oppression of individual freedoms and a lot of hardships. For example, you didn’t even have the freedom to love or have romance with other people, that was something you had to report to the officials for you to be approved to do that. I think there’s something really interesting about a system – what is difference between the idea of socialism and the reality in practice which somehow restricts individual freedom and I wanted to use this film to explore that.