Family films that are Worlds Apart, Lou Reed's Berlin and being the guest of Cindy Sherman filmmakers.

There are plenty of films that touch on family issues showing in this year's festival. From the comedy of mums and dads moving on as kids grow up in Bart Got A Room to one-parent families - Somers Town, Trucker - to issues of angst in the family - The Secret Of The Grain, Worlds Apart.

The latter is the latest film from Niels Arden Oplev, who was responsible for some lovely character development in We Shall Overcome - a tale of a boy who takes on the establishment. Here, touching on similar themes of finding your own way in the world as a teenager, he has produced an equally engaging drama. Based on a true story, Worlds Apart is the story of Sara, a 17-year-old Jehovah's Witness, who finds herself questioning her faith and, by extension, her entire life after she falls for a non-believer.

As with We Shall Overcome, Oplev's film has an emotional weight, but the feelings here are finely nuanced, complex and intricate, which is as it should be. Also, like his previous film, this is a deceptively simple story, but one which touches on issues of responsibility, repentance, and forgiveness that have a broader scope than simply focussing on Jehovah's Witnesses. It strikes a particular chord with me, since as a child a friend of mine was adopted by JWs and, that, as they say, was pretty much the end of that. But I digress... I set up an interview with Oplev for Saturday, so will bring you details then.

Also dealing with issues of responsibility and guilt is Trucker - which has been receiving a juggernaut's-worth of buzz from critics. I decide to see what all the fuss is about. The film stars Michelle Monaghan as the Trucker of the title - a hard-bitten driver who shags on the road and spends much of her off-time getting bevvied up with her pal Runner (Nathan Fillion, who I swear is getting better looking with every film he makes).

Her life is thrown into turmoil, however, when her ex-husband falls ill and she ends up as guardian of her son Peter (Jimmy Bennett), whom she hasn't seen for 11 years. So, about that buzz. Well, the central performances are certainly excellent, with Monaghan very likely to make herself even more of a hot property than she is already as a result, but it doesn't quite do it for me. It's the central relationship between her and her son which is problematic. He's one of those kids in American movies who act like mini-Yodas. Normal kids would run off and sulk, or possibly cry, if things aren't going their way. This one says things like: "You're the scaredest person I know." The film is still well worth a look, although I suspect that it is so steeped in Americana that it will probably play better on this side of the Atlantic than back in Blighty.

Next up was Lou Reed's Berlin - due out in the UK later this summer. Directed by Julian "Diving Bell And The Butterfly" Schnabel, it is a straight down the line concert film, so how much you like it is largely going to depend on how much you like Lou Reed. Personally, I thought it was great to see the music in motion - but don't go expecting anything avant garde.

I decide to check out the Documentary section mixer and it proves a wise choice, not least because I haven't eaten all day and they have a good range of nibbles. I - along with documentarian Mark Street (Hidden In Plain Sight, which I have yet to see) - become increasingly intrigued by the baskets the food is piled up in. See, I even took a photo. After initially imagining this to result in the food equivalent of Jack Straws or Buckaroo, whereby if someone takes the wrong prawn skewer the whole lot ends up on the floor, it turns out that the baskets are not as full of food as first appears, being instead shored up by a crafty combo of rocket salad and aluminium foil.

Illusions shattered, I decide to actually do my job and speak to some folk. I manage to corner Michael Christoffersen (Milosevic On Trial) who seems happy enough to chat. I say that I admire his fortitude for wading through so many hours of court footage to produce his film and he indicates that if he had known what would be involved at the outset, he might never have taken it on. It's interesting hearing his thoughts on the fact that Milosevic died during the trial and he also tells me a litte bit about his next project although this is, he says, very Danish-orientated. All about a big business scandal, apparently. He is also helping someone else with a film about Saddam Hussein's trial, which I guess only goes to show he is a glutton for punishment. 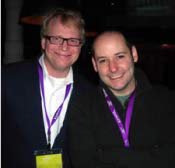 I also bump into Guest Of Cindy Sherman co-director Tom Donahue and his producer Christopher Trela. I have to admit that despite watching lots of documentaries here I haven't seen theirs - at which point they invite me to a screening (thanks, guys). Turns out Soho House - a London-based screening establishment of some renown - have a branch in New York. I'm told to meet them at an A&E party - which I am relieved to note is to do with a TV channel of the same name and not some kind of strange Casualty cavorting - and we'll go from there. Half an hour and half of Manhattan later, I manage to sweet talk my way past the woman with the list on the door. I talk about things such as 'fritzy email' and turn my English accent up to stun. Weirdly, the first person I spot is Tom. Turns out they are just about to leave, so before you can say "remind me again who Cindy Sherman is" I'm bundled into a taxi and heading for the Meat Packing District.

Taxis here are like the New York equivalent of a rollercoaster - exhillirating and petrifying in equal measure. Still we make it there in one piece and it isn't long before we're nestled into comfy leather seats to watch the film.

Cindy Sherman, for those not in the know, is a New York artist known for abandoning her own persona in favour of others within several series of iconic photographs, in which she dresses up, wears masks and all the rest to present different images of women. She is also notoriously press shy - then again, on the strength of this, maybe she had good reason. Paul H-O was the host of a public access television show called GalleryBeat. Making adhoc remarks about galleries, he would pitch up with his camera guerilla-style - which is how he came to meet Sherman. She took a shine to him and the rest of the film documents how as their relationship waxed, he came to find himself increasingly falling within her shadow.

Certainly the footage of the art scene in the early 1990s and onwards is interesting and some of the Sherman footage will also be of interest to fans of her work. The film's editing is a little sketchy, though, swinging back and forth through the years seemingly at random. Tom mentions after the film that around 40 scenes had to be cut due to Cindy's objections (you can read her statement about that here) and I wonder if this maybe has something to do with it. The other problem is that the film falls slightly between two stools, since it is trying to be both an examination of how the New York art scene has moved from counter-culture to corporate styling at the same time as telling Paul H-O's very personal story of being chewed up by the machine and being the "guest of" Cindy at big events.

Still, what it lacks in finesse it makes up for in energy, although I suspect its popularity will probably dwindle the further away from New York that it plays.

Tom and Paul answer some questions after the screening. Paul says: "She [Cindy Sherman] never named any of her work - it's all untitled. It's just a number, she never named any of the work, so she's always maintained a certain distance from what it is that you perceive and who she is as a person."

Paul is asked whether it "pisses him off" that people keep asking him about Cindy rather than his part in the film. He says: "No it doesn't piss me off at all because we got to make the film and we are so happy that the film is available for the public to see, at least at this moment, at the Tribeca Film Festival. It's just the best venue for us to premiere the film, because we made this film right here in New York, we literally made in Tribeca, so we've spent years working on this film and we deserve to be in the Tribeca Film Festival because, dammit, we were in Tribeca and we paid plenty of rent to be there. We actually got priced right out of there."

He's asked whether it isn't just the dealers and collectors but the artists themselves who are behind this shift.

He says: "Unfortunately, you're absolutely right, the artists are complicit. The artists who have a lot invested and a lot to lose. The deal is the artists at the top of the heap are making a ton of money. They don't want to do anything to shake up whatever gig they've got going. It doesn't have anything to do with art and everything to do with commerce. There's a large part of the art market where artists don't touch the work."

So was he originally wanting to make the film about her or was it as a result of finding himself crushed out of the picture in their relationship that inspired him?

"It was never about her. I mean, yeah, she was the big gorilla in the room. But she was the best example of what was happening with the art world and she was the best example of what was happening in my own personal life. It's a very personal evolution of my life. I fell in love with Cindy Sherman, I didn't know any of this stuff that was going on. I was just looking at the art world as it was and presenting it as that. My relationship with Cindy only became something that turned into what the film exhibits - it's really still a boy meets girl story and a girl's stronger than boy story, that's at the base of it. Kind of the market stuff, we focussed on that later on because a lot of the film we had originally had to be taken out."

There you have it then, it sounds to me as though the story - much like the art world - has morphed in the retelling. In any event, its interesting to hear his analysis.

Moonbound Antebellum Annette The Offering Riders Of Justice Ailey The Boy Behind The Door Kandisha Nowhere Special Off The Rails The World To Come Cousins Here After Invisible Demons Deerskin Plurality A Radiant Girl The Sound Of Silence River Babi Yar. Context

The Power Of The Dog to be NYFF Centerpiece Jane Campion looks forward to "emotional and joyous experience."