Eye For Film >> Features >> Straight from the Water Horse's Mouth

Straight from the Water Horse's Mouth

The director of The Water Horse: Legend Of The Deep, Jay Russell, in an exclusive interview. 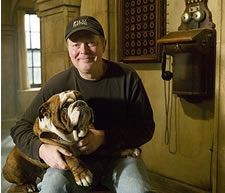 Jay Russell on the set of The Water Horse

Children have a treat to look forward to this week as The Water Horse: Legend Of The Deep opens in cinemas nationwide. Eye For Film's Jennie Kermode caught up with director Jay Russell to find out more about the secrets of Loch Ness.

Jay Russell: I haven't seen any of the other films about the Loch Ness Monster (other than the terrific mockumentary starring Werner Herzog), but what I felt was unique about this story is that it's about the origins of Nessie, but then it's not about that at all. It's about a boy's life during WW2 and the emotional effect the War has on him. What I also loved about it - it takes the ancient legends of the kelpie and the Water Horse and melds it with the more modern ideas of the "Loch Ness Monster" which really only began to flourish in the Thirties via the infamous "surgeon's photo." What Dick King-Smith and screenwriter Robert Nelson Jacobs have done is create a brand new myth, and that was exciting to me as a filmmaker.

JK: The creature in the film is much more animal in nature than previous incarnations of the monster. Was it important to you to keep this element of realism?

JR: When we first began designing the creature (named Crusoe after the kid's favorite book, Robinson Crusoe), creature designer Matt Codd and I sat down at the computer and began cutting and pasting different body and facial parts of many different animals together. We wanted to create something which seemed familiar, but was unique at the same time. As a result, Crusoe's face is a combination of a horse, a dog, an eagle and a giraffe. Then we sketched out four different life stages for this animal from birth to fully grown. I took that design down to Weta Workshop in Wellington, NZ and sat with Gino Avecedo and Richard Taylor to realize these 2D sketches into 3D models which could be scanned into the computers for animation.

All of this process was needed so that once the "digital Crusoe" was alive in the computer with a true skeletal and muscular structure, we could then give it a personality based on its true animal structure and not some contrived "humanistic" cartoon creature traits. Everything Crusoe does in the movie is based on true animal behavior which Weta and I studied through nature footage of seals, whales, dogs etc...

My theory behind this was - if we made Crusoe a "real animal" and if I had Alex (Etel, our young lead) acting and behaving as though he were dealing with an animal instead of a cartoon character, the emotions would be real. Just like how we get emotional with our dogs or cats or whatever. I know it sounds like I spent too much time in the pub to come up with that theory, but I'm sticking with it because I believe that helped achieve consistent performances from the actors.

JK: Did your previous experience with My Dog Skip help you in exploring this story of a boy and his unusual pet?

JR: It's interesting, Alex Etel was exactly the same age as was Frankie Muniz when we made My Dog Skip. It was Frankie's first feature film and was only the second for Alex. I was often reminded of Skip while we were shooting The Water Horse. And even the shooting circumstances were similar, in that, even though we had a real dog on the set of Skip, there was still a lot of waiting for the trainer to get the dog to hit the marks and so forth, much like waiting for the visual effects people to set up all of their blue-screen gear on this film. In both cases, it was a very artificial environment for a young, inexperienced actor. But at the same time, the youth and lack of "technical acting training" of both Alex and Frankie allowed them to just be kids. Their natural ability to pretend and imagine had not yet been "coached" out of them by acting teachers or by agents and managers and the like.

I also learned from my Skip experience how to better keep Alex's focus and provide the right environment for him to achieve the emotional reality needed for his part. And along with that, Skip taught me the patience that is required to work with children and animals, which is never a fast process. Or in this case, children and VFX, which is just as difficult, if not more so.

JK: Alex's performance is certainly remarkable. How did you choose him for the part? Was it difficult for him to work opposite a monster who wasn't added in until later?

JR: True story of casting Alex - Once I decided I was going to make this film, the first person I thought of was Alex. I had just seen Millions and loved the film and loved him in it. I traveled over to the UK for casting and told the casting director I wanted Alex to play the lead part of Angus MacMorrow. She said "OK, but don't you want to see some other kids first, just to make sure?" Being the neurotic that I am, that set off a two month search across England, Ireland and Scotland for a kid. I personally read about 100 kids and saw tapes of at least 100 more. Anyway, I saw some wonderful young actors, but none set off the bell in my head. I was back in London and pretty wiped out, thinking I was never going to find our kid. Then it occurred to me - I still hadn't seen Alex Etel.

We brought him down from Manchester to meet, and the moment he walked through the door I just wanted to slap myself on the forehead. You fucking idiot, of course it's Alex. He's perfect for the part. As an aside, I called Danny Boyle and said "Danny, give me one good reason not to cast this kid." Danny said "Not only am I not going to give you that reason, you are going to make a star out of him." Done deal.

As for working opposite a creature which was not really there, I tried a number of different techniques to help Alex make it real for himself. When the creature was a smaller size, Weta Workshop made these amazingly detailed, lifelike puppets for Alex to hold and watch. There was a Weta puppeteer on the set, who was so incredibly talented that we all began to believe the thing was alive.

Once the creature was too big to be a puppet, we tried other methods and exercises to make it seem real for Alex. I would have speakers hooked up to make loud noises for him to react to. I would sometimes be on the other side of the camera "being the creature" myself. Then, in the case of Alex's emotional farewell to the beast, I put Alex's stunt trainer, who had become his closest friend while making the movie, next to the camera and had Alex say goodbye to him. I scheduled that scene for the very last day of the shoot, so that his farewell really would be a goodbye to us all.

JK: How did the actors cope with all the underwater scenes?

JR: That was the most difficult aspect of making this film. The technology just isn't there to fully realize the look of a human being underwater. The effect water has on the hair and face and eyes is just too random and specific for digital recreation. It's like fire. The digital magicians have yet to crack it.

Therefore, I realized early on that Alex would have to shoot his underwater scenes, well, under water. So the first question I asked Alex after I knew I was going to cast him was "Can you swim?" His answer: "Not so much." It was crucial to get Alex into training as soon as possible. By the end, Alex had become a certified scuba diver, to a degree beyond what is even technically allowed for his age group.

For me, the days we shot underwater were intense. We built this enormous, mutimillion litre water tank in the car park at Stone Street Studios in Wellington (where Peter Jackson shot King Kong). I would sit on a platform just above the water watching Alex on a monitor. He was basically strapped down to a blue barrel six feet under water, breathing through a scuba hose also attached to the barrel. On "action", Alex would spit out the air hose and begin his performance, often with a big wave machine blowing "water current" towards his face. There were always a half dozen scuba divers/safety people right there to help Alex if something went wrong, but still, I was extremely nervous during those days. It was a lot to ask of anyone, especially a kid, but Alex never once complained and actually said he really enjoyed it.

JK: Most children's films this season are much more light-hearted and are full of bright colours and kids' celebrities. Some would call The Water Horse old fashioned. How do you think kids will relate to it and to its young hero's plight?

JR: A story is a story is a story. I have a nine-year-old son who has grown up on the superficial, fast paced video games/movies. I've talked to him after seeing these films and asked "What was the film we just saw about?" His answer is consistently an odd look, followed by "I have no idea."

What I've found fascinating and, frankly, rewarding, is watching a cinema full of these attention deficit disordered, X-Box addicted kids settle in and become engrossed in this story because the emotions are real and the situations portrayed have more depth than they're used to. I've even seen the parents become concerned because the kids are so enrapt - getting scared, getting emotional, clapping when things go right. This is what I remember the movie going experience being when I was a kid. I wanted my son to have that emotional roller coaster ride - not just another hammering of the senses. Now, I'm not really old fashioned myself and don't mean to be too critical of these sorts of pictures, but I think there's room for something more and something different than the same old, same old. In a way, I think some of these formulaic CG animated, pop culture referencing television commercials disguised as films are the ones becoming old-fashioned and have created their own cliches. That's my opinion anyway...

JK: What's your next project? Do you plan to make more films for kids?

JR: It is to my own career detriment that I never plan ahead. I never know what I'm doing next until I'm doing it. And I never know whether it will be a film for kids or adults or teens or anyone... Until something jumps off the page at me, it's difficult imagining the two to three year commitment it takes to make a film these days. But then, when it does leap off the page and slap me in the face, I'll be ready to go.

Antebellum Cousins Here After I Never Cry Kandisha Limbo Luz: The Flower Of Evil The Most Beautiful Boy In The World Night Of The Kings Nowhere Special The Offering Off The Rails Out Of Death Riders Of Justice The Sparks Brothers The World To Come