The scary business of refilming classics - and some original shockers to look out for in the coming months. 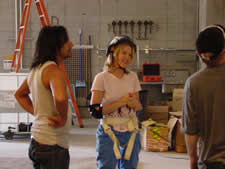 The cast on the set of Animals, which aims to bring some fresh meat to the horror genre

It’s the middle of October and Halloween is fast approaching. When I think of Halloween, I think of horror. As all the children are preparing to go trick or treating I have my own routine – sorting out what I’m going to watch.

Horror has always offered a vast choice for fans – in the Forties they had the Universal classics such as The Wolf Man and The Mummy, in the Fifties Christopher Lee graced screens as Dracula (which will be back in cinemas around the country on reissue this month). The Sixties had Psycho and Night Of The Living Dead, and in the Seventies it was Halloween and The Texas Chainsaw Massacre. Then came the Eighties with A Nightmare On Elm Street, The Evil Dead and Friday The 13th; and finally, in the Nineties, we were delivered The Silence Of The Lambs, The Blair Witch Project and Scream, bringing us to the new millennium.

One thing that stands out about the last seven years is how many ‘classic' horror genre films have been remade. Among the remakes that have littered our movie screens since 2000 only the Texas Chainsaw Massacre, Dawn Of The Dead and The Hills Have Eyes have been worthy re-visits. Some directors have turned in good original material, such as James Wan’s Saw, Neil Marshall’s The Descent and Eli Roth’s Hostel, but then even those films have or are about to die of sequel slaughter (Saw IV is released this week).

Other classics recently butchered include The Amityville Horror, The Hitcher, The Fog and Halloween. What is Hollywood’s fascination with remaking great movies – often poorly? I scoured the internet and came across a further batch of movies that could potentially be hacked to pieces in the near future, including Near Dark, Day Of The Dead, The Last House On The Left, The Evil Dead and One Missed Call.

The thought of seeing one of my favourite genres disappear up its own arse terrifies me. I couldn’t have my anticipation for 2008 ruined by the announcement of another slew of gutless re-hashes, so I set out to find some new inspiration and answers.

Has Hollywood become lazy and run out of ideas? Craig Spector, a successful novelist and screenwriter for upcoming horror film Animals (a movie that certainly won’t lack bite) doesn’t think so. "I don’t think Hollywood has run of ideas. I think Hollywood has run out of courage," he says, likening the way they make creative decisions to "driving down a road you’ve never been on before with the windshield painted black – navigating solely by what you see in the rear view mirror."

Writer/director Eric Red, who as the author of The Hitcher, knows a thing or two when it comes to horror, added: "Hollywood has always played it safe. It’s the filmmakers’ job to make original and quality films and to push them though the system. Nothing’s changed. At least in the last few years, the industry has gained respect for horror films as having box office credibility and they aren’t 'those kinds of films' any more."

Red is no stranger to re-makes. The Hitcher recently underwent the makeover treatment, and his other genre favourite Near Dark awaits the same fate. I asked Red what he thought of the recent revisit to his hitchhiking horror. "I never saw it but read the script," he said. "It was scene-by-scene the same story as my original screenplay but they took all the character out. I received lead writing credit by default, because the writer’s guild determined they didn’t change my original script enough. My overall reaction was surprise that these kids didn’t have enough imagination to run with the premise and come up with anything new."

Red is currently in post-production on 100 Feet, a classical style contemporary ghost story which will be a much-needed injection of life for the horror genre in 2008. Of all the recent reworks Red feels only a handful of films were worth a revisiting. "Dawn Of The Dead I thought kicked ass. In the past, the remake of The Fly was a good stand-alone film, because it reimagined and reinvented the original picture. The remake of The Thing is vastly superior to the original in both concept and execution, in my opinion. I thought the first film was lousy."

Recent remakes have had big-box office success. However, the majority have also been poorly received critically. Yet execs these days decide to green-light a remake of an ‘old classic’ rather than fund an original piece. I asked Spector why he thinks this is. "The best chance of success is to deal with as many proven elements as possible with success being getting the money together to make the movie," he explained. He feels Hollywood is happy when it’s in its comfort zone. "What makes sense? Well, remaking something that made a ton of money before. Spicing it up with a new director and cast and effects is not enough – reinventing it by someone who understands the original material can be great but again doesn’t guarantee success."

With this in mind I wonder how much of a danger this is to the creative element within the horror genre. Eric Red thinks it is risk avoidance. "The thinking is that remaking a previously existing brand name has legitimacy and credibility because if somebody made it once, it must be good, or whatever. John Huston probably said it best: that you should only remake the films they didn’t do right the first time. But I can’t worry about what Hollywood or other people do because it’s beyond my control. Ultimately, I can only worry about what I do. If one of my films is not original or different it wouldn’t interest me, and then it probably would not turn out very good."

Dario Piana, director of up-coming The Deaths Of Ian Stone, a creepy monster movie the director likens to Jacob's Ladder, concurs that "doing remakes is less risky. Half of the marketing is already done and people probably want to see these movies to compare them with the originals."

In a movie world ruled by box-office opening weekends – not longevity - how will the horror genre move forward?

Perhaps Hollywood executives need to establish why they feel recent remake attempts would be interesting to cinema audiences and how they advance the concept of horror; and until they can provide the answers to questions like 'why am I watching this?' and 'why is this worth my time and hard earned money?', I guess we will never fully embrace their choice of horror offerings. Spector feels that lately we aren’t scared or emotionally engaged in the stories on offer. "We don’t go to horror movies to make money for corporations – most people who grew up in this genre want movies to move them – otherwise why the hell else would we watch them?"

So with 2008 looming, this horror fan wants value for money and the assurance of being able to spend two hours watching a film without then wishing he could get the time back again! Before I lose all faith, Dario Piana reminds me why I grew to love the genre so much. "The horror genre has always been very creative and innovative. By doing remakes we're going to lose lots of opportunities to create something very original... Don't forget that great directors have started their careers with horror movies: Brian de Palma, Ridley Scott, David Fincher, Sam Raimi, James Cameron and many others... If they had done remakes, probably they'd be forgotten today!"

With that in mind, there are a number of potentially excellent offerings vying for our attention, in particular, Animals, 100 Feet, and The Deaths Of Ian Stone. All look to be highly intelligent, original offerings, which aim to put terror back into theatres everywhere.