Just a couple of weeks to go until the release of The Simpsons Movie, we drop in on a Q&A session with Matt Groening and Al Jean and take a sneak peek at some snippets from the movie.

The Simpsons hardly need an introduction. No cartoon, even television show, has ever penetrated popular culture in the way the dysfunctional yellow family has. Now, after two long decades, a movie some thought would never happen is finally arriving.

But for die-hard fans, there’s another, more desperate sense of anticipation for The Simpsons movie. The consensus amongst many aficionados is that the standard of TV episodes has been falling for a long time (For me, the decline started as Futurama began in the late 1990s), that the storylines have become increasingly absurd and, frankly, rubbish. 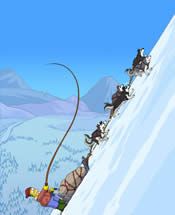 Breathe a big sigh of relief for the movie then – out in the UK on July 27 - it’s looking good. Very good. Having watched a short screening from the film, followed by a Q and A with the creator Matt Groening and producer Al Jean, I now cannot wait. The gags come thick and fast, bigger, smarter, funnier, and ruder even than on the small screen - the nudity taboo the show pushed for so long is finally broken - and with men as entertaining as Groening and Jean, it’s not hard to see why.

Of course, the film has been a long time in the making. Groening says that it’s a notion the creators had been toying with since 1992, “but with twenty-four episodes a year, we didn’t have the time to make a movie. Coming up to 20 years though, we decided it was about time.” During that time, other animated hits, such as Family Guy and South Park, have managed to get a big screen adventure out. Jean is unapologetic though, simply admitting that “South Park’s penis is bigger than our penis”.

And indeed, the lengthy wait could be to the film’s advantage. The script has been meticulously edited, vetted and scrutinised for years. Groening boasts proudly of the process. He says: “We had an all star team, the best ever Simpsons writers together in a small room. There are so many great jokes that have been dropped”. Jean agrees: “We argued over the construction of every minute of film, we couldn’t have felt more pressured.”

Even if what was shown of the movie seems different to the show, it still retains its winning quality: despite its outrageousness, the humour is inclusive, operating at all levels. Along with all the subtle parodies and knowing nods (The spoof Fox ad banner that runs along the bottom of the screen), the jokes that have stood the lengthy testing process are the slapstick. “Homer falling through the roof is the kind of stupid sight gag we’re very proud of. Stupidity is universal, but there’s no kind of comedy we can’t tackle,” says Groening.

And the animation looks good. It’s hand drawn as usual, but much more vibrant and with more depth than before. Groening takes pride in the film’s old-fashioned ways: “What I like about the movie is that it is imperfect, not some CGI masterpiece, a tribute to hand-drawn animation”.

But what’s it actually all about? From the clips we were shown, the big themes seem to be religion and the environment, with Grampa being possessed and Lisa becoming an eco-activist (in one hilarious scene, Green Day drown while performing on the polluted Lake Springfield). All with a heavy amount of Simpsons humour worked in, it should be stressed.

And of course, it wouldn’t be a movie without a love interest. As Groening reminds us: “It’s a romantic movie. Homer falls in love with a pig.” Forget pressing political issues, isn’t that what we all came for? Get excited people, get very excited.

For more information about the film - or to make your own Simpsons avatar - visit the official site. To view the trailer click here.