Druggies in Trainspotting, zombies in 28 Days Later, astronauts in Sunshine . . . whose world will Danny Boyle visit next? How about the tiny realm of Terry Pratchett’s Truckers? He reveals all in our exclusive interview. 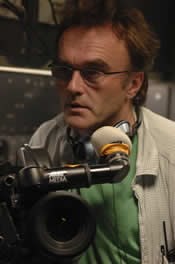 Danny Boyle behind the camera

You would think that after two weeks of solidly promoting his latest film Sunshine at screenings in London, Manchester and on TV, radio and in print, Danny Boyle would be getting just a little bit tired of the whole proceedings, especially since I am his penultimate interviewer on a day which began with a delayed flight from London to Edinburgh. Fortunately, he is unfazed.

"You can't think like that," he says, as he settles himself in the chair next to me in the bowels of Edinburgh's Scotsman Hotel.

In fact, the Manchester-born director - whose energy belies his 50 years - is more than happy to chat about his latest baby, a sci-fi blockbuster set in space. With an ensemble cast including 28 Days Later star Cillian Murphy, Fantastic Four's flame boy Chris Evans and Malaysian favourite Michelle Yeoh, it is set 50 years in the future. Global warming is a fear of the past, since the sun is now dying and the audience is strapped immediately into a mission with a handful of astronauts, who are in turn strapped to a bomb, which they aim to fire into the sun to kick-start its recovery.

Starting as a psychological thriller, then morphing into something much more akin to a creature feature, it has a similar claustrophobic feel to the first Alien. In fact, Danny was going to direct the fourth instalment of the Alien franchise, Resurrection. But he admits that, at the time, he just wasn't up to the challenge.

"Funny isn't it," he says "I didn't know enough then. I really didn't know enough about filmmaking. There was this great script by Joss Whedon that was really interesting - more like the first film - very psychological and quite sexual in a way. I remember talking to Sigourney Weaver, and she said that's why she wanted to do it.

"Of course, the tensions came because the studio really wanted something like the second Alien film - an action movie, for the crew to chase the alien and be chased by the alien. And I thought, in that context I really don't know what you're doing, because that's going to be tough. I didn't know what I was doing and I wouldn't have known how to handle all the special effects that would have been a huge part of it. So I backed out of it. Thank God, I realised quite quickly."

Like the characters in his movie - who face difficult choices regarding their own destinies and that of the earth - control is important to Boyle. And it seems, the closer you get to Hollywood, the less say a director has. This may well be one of the reasons why he was happy to give up some budget in order to keep his hand firmly on the navigation controls.

"It's definitely a trade-off," he admits.

"I think that when Alex (Garland) originally wrote the script for Sunshine he assumed that we'd have to go to Hollywood to make it because it would be an enormous budget, which sci-fi films tend to be, and I just didn't want to do that.

"I said we should do it like we did 28 Days Later, in our place - this studio where we've worked before - and we should get Andrew (Macdonald) to control the film financially and then we can make all the decisions. We'll raise as much money as we can get and then just work within that field, all the time. It's a brilliant way to do it. Absolutely brilliant.

"That's the way you make a $40 million film look like $150m, whereas if you take $150m, I guarantee $50m of it will be wasted; it will just dribble away through the cracks in the floorboards."

This might sound like a pretty extreme financial decision, but Danny is clearly a man who embraces risk.

"It is really nice to change, to do something different," he says. "I would never really want to do a sequel - I would find that really difficult to do, certainly not without a long gap, anyway. You want to approach it with a fresh set of guidelines or rules for yourself.

"This has been wonderful. When I look back at all the films I've done, suddenly I get a panic attack, thinking, how do you do this film? It is not just a challenge - that's such a bland idea - it's genuinely fearful, full of fear, thinking, 'I'm not going to be able to do this, am I?' And that's a good thing to have. Because when you are a director and you've had a couple of successes initially, people fawn round you and it's very - I don't know what the word is - it's very 'gout-ish', sickly and kind of lazy and redundant. It is much better to think, 'I haven't got enough money', 'How am I going to edit it?', 'It's never going to be as good as...' That is a good place to be. I like that place."

There is certainly nothing lazy about Sunshine, which features breathtaking CGI visuals and creates a buttock-clenching tension throughout by carefully contrasting the enormity of space with the claustrophobia of the ship, the bright colours of the sun with the Icarus II's drab interior and sudden explosions of sound with the silence of the universe.

"Very good," he says when I bring this up, with an air of a teacher satisfied that his class has 'got it'. "Always try to accentuate extremes if you can. That's why Trainspotting is an extreme film. It could have been a more neutral film, a slightly more boring film. But we took a risk in making it extremely funny and extremely disturbing - and one bashes up against the next one. It's very risky, but I love doing that.

"I think people want that from cinema and we're going to need it more and more, because people don't just go to the cinema any more, there are so many other platforms they're going to watch through. So to make that cinema, that big event, it should be as much like a car crash as possible. Extremes of beauty and violence. And the sun is beautiful and violent - beyond imagination beautiful and violent - both those things, so the film should be full of that as well. That's what I always feel."

"People want to know because they really love those characters," he insists. "John (Hodge) has done a bit of a version of it, to see if it works and it does work. They're older; they look older and that's the key. They have to look as if they creak a bit. What we didn't want to do was go back into it in the same place. We're waiting for the actors to age a wee bit, to put on a few years, really, I think it will be more interesting then. The characters will have aged and have a different perspective. And that hedonism that exemplified Trainspotting - that people love it for - that's gone."

But before that comes around, he's got plenty of other plans - and, as ever, he's taking things to extremes, set to encompass poverty and Pratchett. According to a recent interview, his next project is Slumdog Millionaire, based on the true story of an Indian who wins the local version of Who Wants To Be A Millionnaire, only to be accused of cheating. More interestingly, perhaps, for those of us who loved his foray into kid's filmmaking, the vastly underrated Millions - which was shamefully forced to compete with Revenge Of The Sith in its opening week - he is "working on another project with Frank Cottrell Boyce, based on Terry Pratchett's Bromeliad Trilogy".

The trilogy tells the story of a tiny race of people - Nomes - who live hidden among humans, and encompasses the books Truckers, Diggers and Wings.

"It's about seven years off," adds Danny. Fans will no doubt feel it is worth the wait.

Sunshine is released on DVD in the UK on August 27