The 1080p transfer of the film on Blu-ray, with a progressive encode on the DVD, has sharpened and cleaned up the image up nicely for a 70-year old film. Audio was also clear and crisp on the Blu-ray.

The extras on this disc are plentiful and a genuine intellect-tickler, as opposed to mere afterthoughts.

The disc includes the original 1947 trailer as one would expect.

A more meaty extra is the hour long documentary Elia Kazan - An Outsider, from 1982. The approach is an intimate one, as alongside old news and film footage, the filmmakers shoot contemporary interviews with Kazan at his country house, his studios, and as he walks New York’s streets and former shooting locations. Kazan is loquacious, erudite and possessed of excellent recall. There is no voiceover narration; the doc wisely lets Kazan do the talking, along with guest interviewees like Robert de Niro.

Kazan’s life story is a classic American immigrant’s tale, and a controversial and fascinating one. This doc covers plenty of ground, not just Kazan’s directorial career but his leftfield, theatre work, writing, and involvement in Method acting theories and communist politics. He recalls working with some of the most intriguing actors of their times: such as Marlon Brando, James Dean and de Niro. His controversial testimony given during the House Unamerican Activities Committee is not ignored either (he is unapologetic, which given his former left wing sympathies and fierce intelligence is all the more fascinating). Said testimony undoubtedly stained his career, but what a rich career.

The feature-length audio commentary by film historians Alain Silver and James Ursini should keep those wanting to learn more entertained. The duo have clearly done their homework and excellently contextualise the film for the layman: though expect an all-business rather than a humorous approach.

Included in the release is an intriguing 44-paged colour booklet.It contains a new 2014 essay by critic Glenn Kenny; excerpts from a 1971 Movie magazine interview with Elia Kazan; the original article that inspired the filmby Anthony Abbot; and a rare behind-the-scenes imagery from the set. It is hard to see what bases have not been covered by this well-presented range of material across the forty-odd pages, and the on-set photographs are lovely to look at. The booklet, as with the commentary, helps situate the film in the context of Kazan’s oeuvre and Hollywood as a whole as well as allow a look at what changes were made in the adaptation from the real-life event. 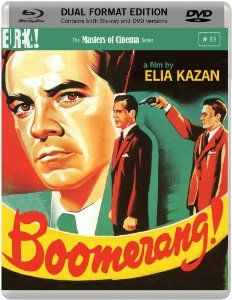 A prosecutor fights to clear an innocent man of murder.