"A happy people with few and simple pleasures," says the opening voice-over, as nine children appear, one after the other, through a crofthouse door. Commentators have dismissed Mackendrick's comedy about the islanders of Todday as stereotypical, patronising and tame, but it is outrageously funny and highly subversive.

In attempting to salvage 50,000 cases of whisky from a grounded ship, a criminal Celtic brotherhood outwit the English Home Guard captain. Mackendrick, a Presbyterian with a strong work ethic, fell out with producer Monja Danischewsky over the latter's romantic vision of a remote community fighting foreign interference, but Danischewsky got his way and his vision was encapsulated in the American title Tight Little Island.

Novelist Compton Mackenzie was inspired by the grounding of the SS Politician off Eriskay, but it was only because Ealing was full that cast and crew made the long trip to shoot on location on Barra, adding greatly to the film's character. 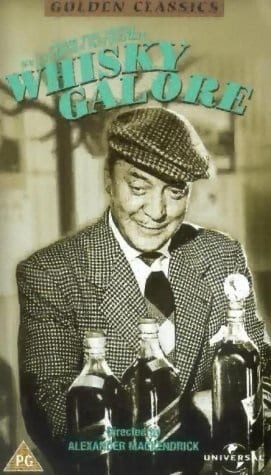 Classic Ealing comedy where a group of Scottish islanders rescue and hide a shipwrecked cargo of whisky.