We Met In Virtual Reality

Joe Hunting doesn't so much offer a documentary discourse about virtual reality with his debut film as take his viewers for a test drive within it. He briefly explains the circumstances surrounding We Met In Virtual Reality - which was shot entirely within the virtual reality platform of VRChat during the worldwide Covid lockdown of 2019 - before diving in. Questions inevitably remain about the physical mechanics of what is described as "full body tracking" but it's easy to leave them to one side and become immersed in, what for most people, will be a world that is both strange yet familiar.

The surroundings may be computer generated and full of spacedogs, sparkling anime-inspired humanoids and a plethora of other characters but the number one name of the game, if you want to call it that, is to socialise purely on your own terms. Like the chatrooms of old, only with a lot more technology and seemingly a lot fewer trolls, VRChat offers spaces where people - so long as they have the money for the kit, of course - can look exactly how they like and socialise. This latter element might be considered particularly vital at a time when the world was finding more traditional methods of meeting and greeting shut off thanks to the pandemic.

Hunting's camera hangs out in spaces including comedy clubs, bars and classrooms, loosely following the stories of two couples and a sign-language teacher and her Deaf friend. There is, of course, a slightly goofy element to all of this, from the bustilicious bobbing of certain characters' attributes to a mogwai in specs, but we quickly see the more poignant emotional landscape is every bit as important as that manufactured by pixels and bytes.

Toaster, who is dating virtual dance teacher DustBunny, reveals he had been 'on mute' for months on the space before he met her. IsYourBoi, meanwhile, opens up about her struggles with alcohol before she found a healthier sort of adrenaline rush as a virtual exotic dancer - a space where she met her partner DragonHeart. Sign language instructor Jenny, who has auditory processing disorder that can make everything "sound like a broken radio", talks about the inclusivity of the platform and translates for the camera for her Deaf friend Ray.

Beyond the talk, we can see the impact of these friendships, not just in the way the virtual romances have extended into the real world, but in the support networks that are offered, including the Helping Hands community, where Jenny and Ray teach sign language. I was quite saddened to note, during the research for this review, that VRChat has just banned Mods (modifications) which has had the side-effect of halting closed captions on the platform for the Deaf and hard of hearing. If there are unsavoury spaces out in the VRChat universe, Hunting doesn't go there, and we see even the lapdancing club puts an emphasis on safety and the enjoyment of being yourself. Not only have many of these people met friends and partners in virtual reality, they've been given the liberating opportunity to meet the virtual "self" they always wanted to create for themselves. In this place of 'unreality', the denizens are keeping it real on their own terms. 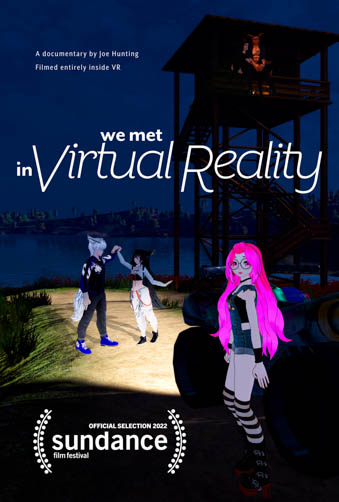 Filmed entirely inside the world of VR, this vérité documentary captures the excitement and surprising intimacy of a burgeoning cultural movement, demonstrating the power of online connection in an isolated world.