The supernatural is in the realm of the real as a son controls his parents from beyond the grave in Guillaume Nicloux's searing portrait of a long divorced couple played by Gérard Depardieu and Isabelle Huppert. Following instructions, they meet up in Death Valley. Their son Michael committed suicide months earlier and sent both a letter promising that if they visited specific spots in the American desert, he would appear to them.

Isabelle Huppert, whose character is never named, arrives first. We explore with her the motel, the pool, the touristy surroundings, before we even see her face. The bright orange patterned shift dress matches her hair which matches the rusty red bark of the palm trees. A man puts things into the trunk of a car. Does he know her? Does he belong in her story? Our story? These are the kind of questions Valley Of Love invites us to ask.

Similar in effect to what Nicloux did with The Kidnapping Of Michel Houellebecq, fictional plot and biographical details merge so that in the end, only truth matters, once it made its way through fact and fiction. He gives his audience plenty of room to reflect on the seen and unseen and to provide personal reference points beyond the screen. The director told me that he tries to not be concerned about costume or set design after having cared too much in the past. Thus it is Isabelle we can thank for choosing the magnificent bathing suit she wears before Depardieu's arrival.

The two for a while, at least visually, become a regular sightseeing couple. He has pineapples on his shirt and a scorpion on his red cap; her blouse is aflutter with birds. Death Valley seems populated by people just like them, each carrying their untold story and looking for something extraordinary. The natural wonders of the desert can be read as an invitation to reach into the vast barrenness inside.

"Maman, I am dead and you are alive," begins the letter that brought her to Death Valley after she had given it to three graphologists who confirmed that it was indeed her son's handwriting. Whereas Jeff Nichols' cryptic Midnight Special gives body to the son, Michael resists symbolisation. Did he appear in a dream to Isabelle and grab her by the ankles which still show fingerprint marks days later? What does the father see in the canyon beyond the bend?

A truth can be found in the small supermarket where Huppert checks out the different cereal brands and ends up buying hot and sour soup. Or in the book Depardieu signs as "Bob De Niro" for a faux fan who can't recall his name. There is the woman by the pool, who could have been in Cukor's The Women, who knows the exact temperature in Vegas and remembers the castles on the Loire. An old-timer in a bar demonstrates how to curse at bystanders at just the right time and a girl in blue, standing on the blue nightly tennis court, tells Depardieu that she is waiting for him because she knows "it is too hard."

Nicloux's scenes can be hypnotic and simultaneously preposterous. The afternoon light in the valley is fantastic. She says "your feet look horrible." A lawnmower goes by. He touches her face. He leans in for a kiss. She gives it to him. He says "again".

Gérard Depardieu and Isabelle Huppert have not been on screen together since Maurice Pialat's Loulou in 1980 and it is spellbinding to observe how they stroll through this mysterious desert tale of love and loss. 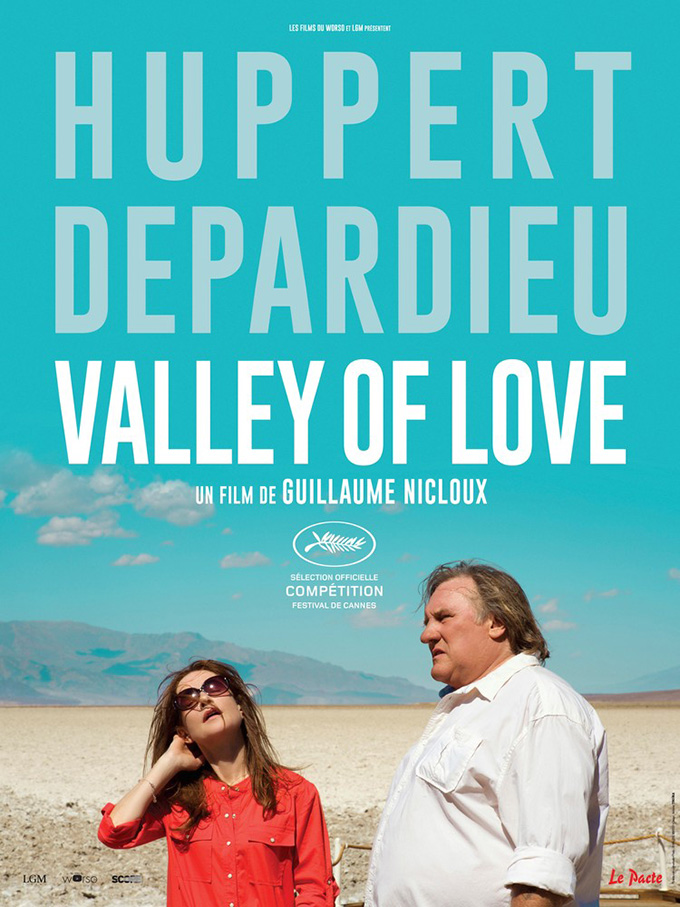 Two estranged parents are brought together by a request from their son who committed suicide.