Transformers: Dark Of The Moon

Cast your mind back to 9/11. Lost for words to express the enormity of the horrific spectacle unfolding on their screens if not before their very eyes, people kept incredulously repeating the mantra: "It's like something out of a movie." Well, Transformers: Dark Of The Moon, the third in Michael Bay's Hasbro-based franchise, recreates precisely the unbelievable, in-your-face blockbuster that 9/11 was like.

Flying metal behemoths swoop into the sides of urban towers, causing mass terror and destruction, as ant-like people hang (and in some cases fall) from windows or flee the billowing smoke clouds and death down below. "Let's roll!", shout the good guys when at last they decide to step up and take things back from the bad guys. It is like seeing disaster movie clichés, with a reality peeking through that is itself rooted in, and modelled on, even more action movie clichés.

It is the 21st century nightmare, played out with a boy's toys and a boy's idiotic sensibility. It's got big cars, even bigger robots and, just to add to all this over-sugared eye candy, a trade-in 'hottie' on the side (Rosie Huntington-Whiteley, her 'bodywork' objectified and commodified by the leering camera in exactly the same way as her predecessor Megan Fox's). This is devastation and loss made cool, sexy and fun – or at least that is the idea. For some it will just be bludgeoning, confusing and stultifying. Bay's unchanging principle that more is more in fact delivers less and less as the minutes keep ticking by.

That, however, is just the film's second half, after the city-scale action has kicked in and just keeps kicking until the poor viewer is left feeling bruised and battered by the bluntly overwhelming force of it all. Before that, there is the long, long build-up - the endless elaborations of a plot that is made to feel more complicated than it really is, without ever rewarding those viewers who can be bothered to keep up.

In the losing battle between Autobots and Decepticons on the planet Cybertron, a new superweapon/macguffin is shot down in transit and crash lands, along with its inventor Sentinel Prime (voiced by Leonard Nimoy), on the dark side of our Moon. Apollo 11 is sent on a secret mission to find it, and does so – as do others. Cut to the present (or thereabouts).

Sam Witwicky (Shia LaBeouf) is the same old geeky hero, with the same annoying parents (Kevin Dunn and Julie White), the same obsession with classic bangers, and with new girlfriend Carly who, though different, may as well be the same as Megan Fox's Mikaela. He met her when picking up his medal of honour from one Barack Obama – and ever since that day, his star has been falling.

Now he finds himself separated from his Autobot friends and their Decepticon-fighting operations, and struggling at the very bottom of the corporate ladder. Thank goodness, then, that the whole of humanity is threatened once again by a convoluted plot by the Decepticons (and others) to bring Cybertron to Earth. This, you see, gives Sam the perfect opportunity once more to find his mojo and save the girl – which, in the end, is apparently what all that Chicago-wide metal-on-metal mayhem has somehow been about and for.

That is one – but only one – of the problems with Transformers: Dark Of The Moon. Its scale is so vast – so interplanetary, even – that the human element, which is very much the focus of the film's first half, is left dangling redundantly in the second. We may keep following Sam as he enters the beleaguered city, scales and slides along a tilting, teetering building (the film's most impressive sequence), and generally leaps, jumps, dodges and even (sort of) fights – but if he were taken entirely out of the equation, the film would still have essentially the same ending.

It is the Transformers on either side who make the difference in this battle – but though the level of detail that goes into their CG animation is simply extraordinary, their paintwork and silly 'foreign' or 'street' accents are never enough to make them feel like real, relatable characters. Not that the human players are so much better. Experienced actors, such as franchise regular John Turturro (as Simmons, more grating with each movie) and newcomers Frances McDormand and John Malkovich barely enliven grotesquely cartoonish characters that are far beneath their talents.

The physics presented here, especially when an entire planet appears alongside Earth without affecting its gravity in any discernible way, make little sense – but that hardly matters in a film based on a wish fulfilment plaything. It also does not really matter that the film's 3D (a first for the franchise) is amazing only for about five minutes, after which you stop noticing it altogether and may as well have just gone for the 2D version and saved yourself the extra money (something that is true, surely, of most 3D films).

The underlying misogyny and homophobia of Transformers: Dark Of The Moon may well not bother its target male adolescent audience. None of these things need represent shortcomings that are terminal for the film. Far worse, though, is the simple fact that this is a fantasy war film about giant robots doing kickass damage, full of awesome explosions, OTT effects and epic mêlées – and yet somehow, it still manages to be thuddingly boring.

The comedy is not funny, the action is exhausting, and by the time its 156 minutes are over, you too will have been transformed into a dead-eyed machine that has lost the power or will to care – although if you have made it this far into the franchise, no doubt all Bay's sins will be forgiven, or at least forgotten, by the time Transformers IV rolls off the production line.

It goes without saying that this, like all the Transformers movies, will be efficiently, even violently, dismantled in reviews just like this one – and still make a mint. It is the definition of critic-proof. Just don't say you weren't warned. 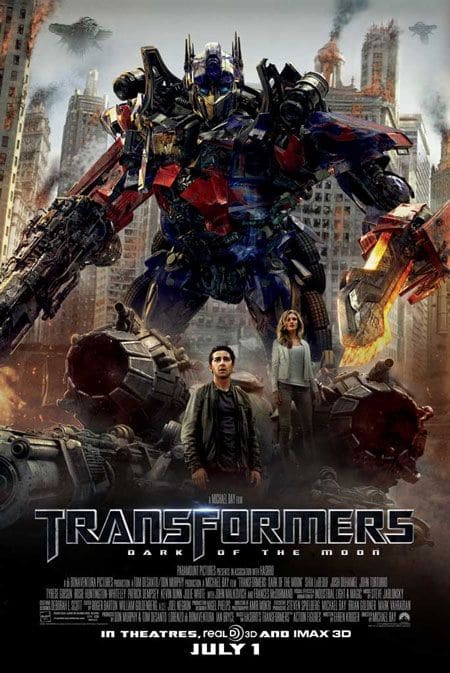 The Decepticons and Autobots battle once again.