Is Amy Schumer’s autobiographical odyssey around her own foibles, sexual frolics and psyche a ground-breaking insight into female emancipation and the battle of the sexes or just another Judd Apatow romp with the occasional serious reflection?

This reviewer would tend to the latter although it’s perfectly watchable and occasionally touching despite itself.

Just to ensure we get the personal references Amy plays Amy Townsend, a singleton whose clarion call is: “Don’t judge me, fuckers.”

Apatow turns the tables to give Amy the upper hand over the poor male of the species including one pick-up whose genitals are given a verbal bollocking (so to speak) as Amy summons up her armoury of putdowns. The victim does, however, manage to come up with the goodies despite the barrage.

This New Yorker, living on her own, seems to lead a fairly vacuous existence of one-night drunken stands which has boundaries: “Never let them sleep over” is her credo.

As a result, one of the most telling scenes in the film has her waking up on Staten Island and teetering home on the highest of heels and the tiniest of skirts.

Amy, if you hadn’t already deduced, has difficulty with commitment. There is a muscle-bound boyfriend of sorts (John Cena) whose most memorable contribution is along the lines of “Let me fill you with my protein.” Enough said. At least the girl has the good sense not to keep herself for him.

When she’s not bonking and boozing, her character makes a living on a magazine which runs such riveting material as Ugliest Celebrity Kids Under Sixteen and You’re Not Gay, She’s Boring. Tilda Swinton puts in a spirited turn as her editor. Somewhere along the line she meets a sports surgeon (Bill Hader) and actually falls in love.

The serious note is struck by Amy’s father (Colin Quinn) who is equally fickle in relationships. When it is revealed that he suffers from multiple sclerosis and has to move in to a home, cue serious tears and familial hugging.

Perhaps somewhere along the way Amy grows up and becomes a better person but I’m not convinced.

Trainwreck is released in the UK on 14 August. 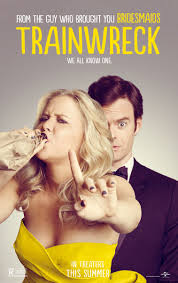 A woman with a fear of commitment finds herself falling for a man who wants to settle down in a monogamous relationship.

Amy with no holds barred