Tony Benn: Will And Testament

Less a traditional documentary than an illustrated and intensely personal memoir, Skip Kite's film about the life and political times of Tony Benn is magnetic because its subject, the late former Labour elder statesman, tells his story in his own words, having collaborated on the film shortly before his death this March. It certainly struck a chord with viewers at Edinburgh Film Festival, where it took home the Audience Award.

That he gets to relate history - or rather his story - would no doubt please Benn immensely as he was renowned for making sure that what was written about him remained accurate, taping interviewers as they taped him by way of safeguard.

There is an elegiac sweep from the outset, with part of the setting sees Benn a comfy armchair by a fire, while in one corner of the "room" an autumnal tree sheds its leaves and in another, a CND tent sits mournfully behind a barricade. This gives a sense of Benn being part of the outside world as much as piece of the aristocracy - which he famously and groundbreakingly renounced in 1963 and refers to here as "a bit of nonsense" about a peerage.

That he was in the autumn of his life during filming is clearly high in his mind - and intended, thanks to that tree, to be there for us as well. But that doesn't stop Benn making this posthumous onscreen message a call to arms of sorts, clearly intended to remind those who care (or are perhaps unaware) of what, in his opinion, the Left has lost down the years.

"You have to fight or you lose," he insists, while lamenting the shifting power dynamic towards the right and urging us to exercise our vote. Key moments of his life are covered, from his time in the airforce to the peerage problem through to his involvement with North Sea Oil and the Miners' Strike. He pulls no punches on the latter subject - and links up the two sources of energy in Maggie Thatcher's 'game plan'. Again, however, Benn ends up by accentuating the positive, noting how communities have refused to be broken by the shutting of their industry - "You can close mines," he says, "but you can't close miners."

Tony Blair doesn't escape his opprobrium either, being upbraded for his re-invention of the Labour party and disregard for the principle of common ownership. Benn also says the he is not ashamed to admit his mistakes, although only one of them is really included here - his changed view on the issue of nuclear power, which he once regarded as a good idea. This now seems not just an error but his deepest regret.

Though overtly political - you surely would expect nothing less - Benn also talks about his family and his personal inspirations. In some of the most touching moments, he recalls his wife Caroline DeCamp, who pre-deceased him in 2000. "She taught me how to live and how to die - you can't ask more of anyone," he says, and, later, struggles with emotion as he remembers her death.

It's easy for us to think of Benn in his later years, pipe in hand, cast as a National Treasure and somehow "safe" to listen to, but Kite's film reminds us of what an intensely polarising politician he was in his younger years. "I'm not harmless," he insists. Yet, there is something sentimental about his portrayal, as Kite lays on the "what we have lost" line just a little too thick. Like a family scrapbook - Benn himself approved the final cut - what is contained here is carefully curated, chosen to represent in a certain way, the images selected to illustrate an argument, but thanks to Benn's unnerring conviction, is no less fascinating for that. 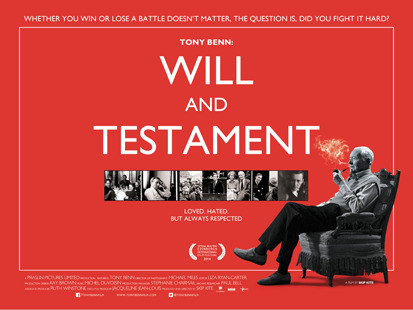 Portrait of the long-time Labour MP.