Fragmented family memories come alive in the Roman sun and at the Mediterranean coast of Camargue. Opening this year's Open Roads: New Italian Cinema, organized by The Film Society of Lincoln Center in New York, in partnership with Istituto Luce-Cinecittà, is Daniele Luchetti's autobiographical reckoning Those Happy Years (Anni felici).

Recalling a turning point in his childhood, the film glistens with the best kind of nostalgia in the details and expands into wider socio-political threads. Summer of 1974. A hut by the beach selling blow-up swim animals and bright plastic sand shovels is so vivid that you can smell the ocean and taste the dunes in the wind.

Kim Rossi Stuart plays Guido, an artist who feels undervalued and misunderstood. He makes plaster pieces with naked women, lectures at the academy about Yves Klein and Vito Acconci and teaches his two young boys how to appreciate art by holding up two postcards and letting them decide which one is better. In his opinion, they mostly get it wrong with their inherently conservative childhood taste, as do most of the critics who find Guido's work contrived. To be shocking and provocative means everything to him. The scene with the postcards is touching and funny and full of a love that can only be appreciated in retrospect.

Serena (Micaela Ramazotti), Guido's wife and mother of the two boys struggles with his unfaithfulness, her place in his world and the world in general. When her husband's art dealer, gallery owner Elke (an excellent Martina Gedeck, the female lead from Florian Henckel von Donnersmarck's Oscar winner for Best Foreign Film The Lives of Others), invites her and the children to go on vacation to France at a kind of feminist resort, power dynamics start to shift.

Serena's family, described as "merchants", who gather traditionally at their summer house, represent a controlled nest about to disappear. Little Dario (Samuel Garofalo), the filmmaker's alter ego, is given a Super-8 camera by his grandma. He will use it on vacation with his mother and brother in Camargue, filming wild horses, wild French girls and the shifts of unexpected summer happiness which include his own performance of Snow White.

Guido himself has a performance piece at the Milan Art Palace and is torn apart by the critics. Wanting to be disturbing at any price, he has created work that moves nobody and becomes free-floating. Luchetti does a wonderful job sailing around the cliffs and he doesn't allow Guido to sink because humiliation of the artist as a young father is clearly not why he made this film.

"We'd lost our innocence - or better we found it," sums up the experience of mother and son in France that summer. Dario's holiday footage is so good that Kodak want to use it for their TV commercial. "You started selling yourself young," judges the boy's paternal grandmother (Pia Engleberth). In one of the film's strongest scenes, Guido explodes and sets his mother straight. He defends his son's accomplishment and we see in an instant where much of his anger originates.

They watch a cartoon show (Osvaldo Cavandoli's La Linea) on TV. The main character and his surroundings are drawn as one continuous line. Those Happy Years has a lot in common with the fragility and strength of this concept.

When absence can inspire art the future looks bright. 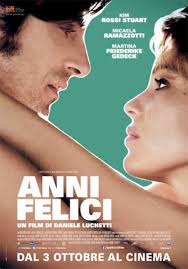 Romantic comedy about the ups and downs of a struggling experimental artist in 1970s Italy and his relationship with his wife and two children.