And so, another piece of Marvel mythology is hewn from rock that is one-part granite and two-parts fluff. Thor: The Dark World is nimble of step in the comedy department but as heavy as a hammer to the chest when it comes to exposition. The set-up is of the typically complex-yet-simple sort that tends to exist in superhero movies. To put it the long way round, the nine realms of the universe are reaching a convergence during which ancient dark elf Malekith, with the aid of a pre-universe destroyer-of-worlds gizmo, the Aether (which looks like a stream of angry, rampant cola), plans to plunge the realms into nothingness. In short, it's dark versus light.

Things start inauspiciously, in the Realm of the PlayStation, with a battle sequence reminiscent of those automated scenes that play out when you start a new computer game and which leave you twitchy to skip and eager to take control. This is the dark elves' backstory, involving lots of limb slicing, the banishment of the indestructible Aether to a place in the depths of the Dark World and a temper tantrum from Malekith (Christopher Eccleston, barely recognisable under a mass of Middle Earth style make-up and with little to do but brood). Fortunately, with the action set-up in the bag, the character interaction sets in and things begin to look up.

Thor (Chris Hemsworth, with a chest that can bend girders and a voice that melts butter) is still finding time between battles and expositional chats with his dad Odin (Anthony Hopkins, booming) to pine for his mortal love Jane Foster (Natalie Portman, swoony), checking in on her with the help of Asgard gatekeeper Heimdal (Idris Elba, stoic). Needless to say, back on Earth, Jane is getting into a little local difficulty, having unwittingly become a vessel for the Aether. Rescuing her from that - and the endless buddy banter of pal Darcy (Kat Dennings) and her intern Ian (Jonathan Howard) - Thor attempts to explain why he hasn't thought to pick up the inter-realm phone in two years while cooking up a plan to save the day that, unfortunately for him, includes freeing his janus-faced brother Loki (Tom Hiddleston) from prison.

It is in this fraternal relationship that the film hits paydirt, which is why it is such a shame that Loki is cruelly confined for much of the runtime. Hiddleston has crafted that most successful of villains - one who is duplicitous but also wounded, the sort we always hope may undergo a change of heart. He and Hemsworth let their vulnerable side show during key scenes together, creating chemistry that the rest of the film lacks. There is a suspicion that we're watching the movie equivalent of the Bifröst Bridge, transporting us onwards to a possibly better third instalment in which this relationship can once again come to the fore. You can't help wishing that screenwriters Christopher Yost, Christopher Markus and Stephen McFeely had spent more time bolstering their exchanges and less on crafting the one-liners elsewhere, which, though often successful in purely comedy terms, leave the film feeling lightweight and lacking in emotional undertow.

This cast, which also includes the overexposed but underused Stellan Skarsgård as dotty Dr Erik Selvig, deliver the goods but director Alan Taylor lacks faith in them, all too often crowding out the film with sub-standard CGI that offers us no skin in the game. Entertaining to a point but not the sort of movie of which myths are made.

Oh, and don't forget to stick around for the whole of the end credits, as there are enjoyable post and midway stings. 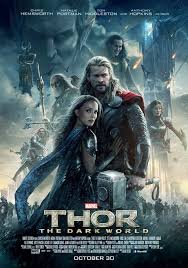 Thor takes on the dark elves to save the life of his mortal love Jane.