"The wife." Those words. So loaded. Like an add-on somehow, especially that "the". For famous author Joseph Castleman (Jonathan Pryce), Joan (Glenn Close) would always be "my" wife. "She's the love of my life," he tells everyone. They seem to be in a good place when we meet them, J and J, like peas in a pod, still able to flirt with the idea of sex and ready to jump on the bed like 12-year-olds when Joe gets a bell from Nobel to say he's won the top literary prize. Joan shares the news on the party line, just as she's shared everything with him, smoothing the edges of life for another person and having a family. They're about to be grandparents, even if their adult son David (Max Irons), an aspiring author, is in a war of friction with dad. Despite all this, there's something slightly stoic in Joan's carefree attitude, a hint of selfishness in Joseph's air, and the upcoming trip to Stockholm for the prize-giving starts to bring a chill into the warmth of their familiarity.

Swedish director Björn Runge has patience. He's in no hurry to reveal his characters' faults or their history, letting his camera linger on Close and Pryce, so we can see the thoughts that swim on after the words die away. When we do flashback to see them before (played solidly by Annie Stark and Harry Lloyd, although they never quite muster the chemistry of their older selves), in the first sugar-rush of love to come, he does so gracefully, allowing the score from Jocelyn Pook to suggest, through just enough dissonance, that there was more to things than met the eye even then.

What things? The sort of things that Joe's would-be biographer Nathaniel (Christian Slater) wants to know about, that's what. He realises Joe is as tough to crack as one of the walnuts the writer keeps in his pocket, so he's out to work the family, see if anything breaks. Jane Anderson's script, adapted from the book by Meg Wolitzer, captures the way that people who know each other almost better than they know themselves push the buttons, break the chains, then pick up the pieces, sometimes within minutes. The way that resentments are balanced against triumphs, betrayals against battles fought together and the suggestion that nothing can fully taint remembered tenderness. The film also has a strong feminist streak, highlighting the way women after years of fighting against being sidelined deliberately are still often assumed to only be interested in shopping and a spa.

This is the sort of role that just can't wait to wrap itself around Glenn Close, like the Marquise de Merteuil in Dangerous Liaisons or Alex Forrest in Fatal Attraction. She takes on all the facets of Joan, wearing her outward appearance like an elegant coat, but letting flashes of all the 'other' Joans glint through, while Pryce crumples up into Joe's old cardigans like the perfect gentleman. There's some predictability here, old relationships are like that, and these themes have been round the block before, but the destination, like the Nobel prize, is not the main objective, it's everything that leads to it that counts. 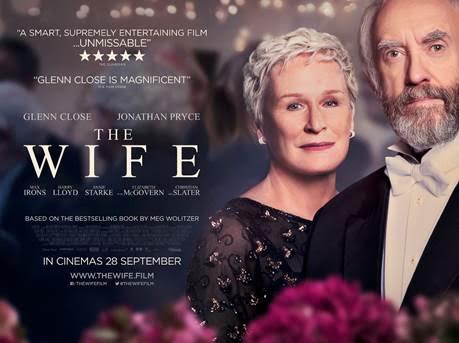 A wife questions her life choices as she travels to Stockholm, where her husband is to receive an award.