The history of this wartime documentary is more interesting than the film itself. Co-directed by Carol Reed, produced for the Ministry of Information and now the property of the Imperial War Museum, it covers the last year of World War Two, from the preparations for D-Day in June 1944 until the collapse of the Third Reich in May 1945. It has been edited from footage of over 700 frontline cameramen, some of whom didn't live to see it win the Oscar for Best Documentary. When first released, the Americans were still fighting the Japanese in the Pacific.

The film is introduced in a piece to camera by General Eisenhower and, as wartime propaganda, the message is not so much how clever we were to lick the Hun, but rather, as buddies together, teamwork and the "comradeship of free people" won us the day. In order to press home this theme, the progress of the war is told by a succession of disembodied voices, apparently British naval officers, American GIs, Canadian tank commanders, cockney Tommies, French resistance fighters, Red Cross nurses, Polish spitfire pilots, even negroes from the American Deep South - indeed, it seems that every class, rank and nationality engaged in the conflict is represented on the sound track. The film ends with the Western Allies hugging and celebrating with their Ruskie comrades on the River Elbe.

Much of the camerawork is very impressive, particularly the more lyrical shots of soldiers in semi-silhouette against early morning skies, but 50 years of war movies and television documentaries has made much of the material seem all too familiar and we are now deadened to the powerful effect it once must have had. There are skies blackened by falling paratroopers, shells being loaded into breeches, clusters of bombs dropping away from us onto exploding cities below, buildings collapsing into the street, the lightening flashes of pounding heavy artillery, soldiers taking cover behind broken walls, close ups of our boys eating, laughing and concentrating on the task in hand and, being a feelgood movie, frequent scenes of Allied troops being welcomed by crowds of happy liberated citizens and surrendering German soldiers with their hands firmly clasped to the back of their necks.

Although battles resulting in heavy casualties, such as Omaha Beach, Caen and Arnhem, and embarrassing setbacks like the Battle of the Bulge tend to be passed off as "the price we have to pay" to defeat a cunning and resourceful enemy. In fact, despite so many scenes of destruction, the film seems to present a curiously sanitised account of warfare. Allied wounded are seen being carried away on stretchers and promptly treated by caring nurses and the only real horror is the now all-too-familiar revelation of the fate of Belsen's inmates, accompanied by the words of a battle-hardened soldier, declaring, "I didn't think I was squeamish any more but....." and "I now know why this war has been worth fighting."

The True Glory is an interesting and invaluable record, but its relentless progress towards an inevitable end and the repetitive sameness of much of the footage eventually begins to pall.

Included in the package are four other full length documentaries, covering most of the same events in more detail - From Italy To D-Day, From D-Day To Paris, From Paris To The Rhine, From The Rhine To Victory - but in their case, the commentaries have been officially scripted and read by an unauthoritive voice.

For me, the most memorable sequence shows the activities of the French Resistance in the days before Paris is liberated. The Gestapo and German army, attempting to evacuate the city before the Allies arrive, are being mercilessly ambushed by French fighters, shooting down on them from upper storey windows. In one truly horrific incident, an incendiary bomb makes a direct hit on a truck load of fleeing German soldiers, which immediately bursts into flame. We watch as one man in particular writhes desperately around in the street, trying in vain to extinguish the fire that gradually envelops him.

There is nothing in The True Glory as disturbing as this. Nowadays, filmmakers employs stuntmen to perform that trick. 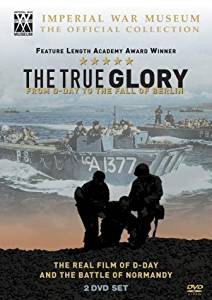 The last year of the Second World War, as witnessed by 700 frontline cameramen.

Dunkirk
The World At War