When people think of mountains, Everest is probably the one that springs most readily to mind, but for serious climbers it is a walk in the park compared to the challenge of the world's second highest peak K2. The Himalayan giant - described in Nick Ryan's debut feature documentary as "a mountain on a mountain" - didn't earn the nickname of Savage Moutain for nothing.

One in four of those who make it to the top, don't make it back down again. Ryan tells the story of the fateful month of August 2008, when only 11 out of 25 climbers from various expeditions lived to tell the tale.

Ryan mixes archive film taken by those who made the climb with re-enactments shot by Andrea Arnold's cinematographer of choice Robbie Ryan and K2 footage from Stephen O'Reilly. Knitting it together are interviews with some of the survivors and relatives of those who died on the mountain, as Ryan tries to create a picture of who died when, how and, perhaps most controversially, why.

Climbing it seems is a solo business, even if you are in a group, with the unwritten rule being that if you get into difficulty you shouldn't expect a fellow moutaineer to risk their lives to save yours. Unless, apparently, you happen to be a sherpa, in which case you may well be sent on a suicide mission or, if you believe the argument put here, Irish climber Ger McDonnell. Ryan's movie makes a solid claim that McDonnell lost his life trying to save three other climbers but by increasingly focusing in on his story, other elements of the film become less satisfying. There's an argument that more of heroic Pemba Gyalje and the other sherpas' testimony, in particular, could make for a riveting - and possibly more objective - exploration of events.

Certainly, Ryan offers excellent insight into the general mindset of climbers, helping us to understand why they choose to climb in the first place, and leading us through the gamut of what can go wrong. The bolstering of the real-life footage and photographs with beautifully shot re-enactments puts us right alongside them as they retell their stories and he gives a sense of the way altitude can compromise mental function and underlines the unreliability of first-person testimony.

Still, the jigsaw of interviews feels as though something is missing, while the piecing together is sometimes frustratingly convoluted. Much is made of the ill-prepared situation a team of Koreans found themselves, for example, but since their team leader refused to be part of this documentary, it's impossible to know if the arguments made against them are borne out of truth or a desire to blame the other guy.

Footage concerning Italian explorer Walter Bonatti - at the centre of a much earlier 1950s controversy surrounding a climb of K2 - is also relevant to a degree but it adds to the feeling that the film is being overloaded, making it hard to follow in places.

At its best this film is a gripping look at what drives people to brave the heights, although it would have benefited from taking a more linear approach to its undoubtedly well-researched material. 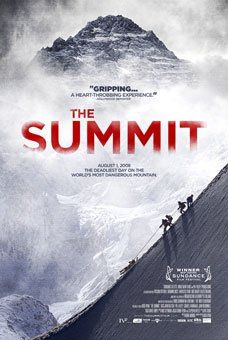 Documentary exploration of a deadly attempt to ascend K2.
Trailer