Proving that character and life's inconsequentialities can be just as compelling as a straightforward narrative, Ramon Zürcher's distinctive debut feature finds drama in the everyday goings on of a single, middle-class Berlin apartment.

He mines the space for psychological tension and absurdist humour, as a family prepares for a get-together - encouraging us to acquire the curiosity of a cat, as cinematographer Alexander Hasskerl witholds things just outside the frame, often focusing on one person, as arms intrude from this angle and that across a kitchen table, items are placed in view or noises are heard from objects we can't see. The hall of the apartment, meanwhile, becomes akin to a busy junction, it's traffic of bodies flowing through one another's personal space.

Although the family members are hardly ever alone, there is an almost constant sense of alienation from one another. This is most obvious in the character of the mother (Jenny Schily), who frequently seems to disengage with the family completely, becoming lost in her own thoughts or offering non-sequital replies to them. She has an air of pent-up violence, sometimes suggested - as in a moment of a foot poised to do damage - and at others realised through a slap.

Her elder daughter (Anjorka Strechel) offers spiky observations and a foil for the youngest member of the family Clara (Mia Kasalo), who knows how to create a cacophony all of her own. The fact that her relatives barely seem to react to her competitive shrieking matches with the household goods is an other example of the family's strange mixture of acceptance and disengagement with one another. Equally, Zürcher captures the paradoxical way that people often ignore one another when they are being spoken to directly, yet have a fascination with 'spying' on moments of perceived privacy.

Flashback interludes also focus squarely in on one person, as though they slip into their own little worlds while recalling an incident, again emphasising a sense of loneliness. Meanwhile segments featuring the cello and guitar-led Pulchritude, played with a gathering insistence by Thee More Shallows, have both an urgency and melancholy that fits perfectly with the film. This is particularly effective in 'still life' moments, when the camera wanders over the detritus of modern life, suggesting how inanimate objects can take on almost as much significance as people, depending on your viewpoint.

Zürcher's film may not follow traditional storytelling lines but it is bold in form and, for all its lack of story, memorable in content.

As for the cat? It does its own thing, chases a moth and is content. There's a suspicion Zürcher thinks we could all learn from that. 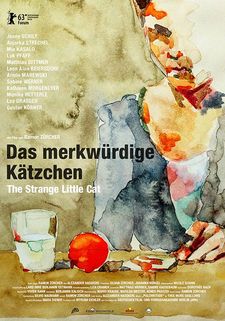 An intimate look at a family preparing to eat dinner togather in a Berlin apartment.