Could this be another Bridge On The River? Why?

Same connections, same conditions, same continent. Back in a POW camp in the jungle where British soldiers, after the fall of Singapore, are worked to death building a railway and treated worse than street curs.

The Railway Man goes beyond the war years into that void called Peace, mentally wounded by the knowledge of what has been and yet unable to speak of it, or move forward into the protection of ordinary life.

One of the survivors (Stellan Skarsgård) who meets regularly at the Berwick-upon-Tweed servicemen's club reveals, "We can't live; we can't sleep; we are an army of ghosts." To have suffered so cruelly for so long breaks a man's spirit and turns memories to stone.

Eric Lomax is one of them. He marries a lady he meets on the train. Later, he returns to the camp, which has become a tourist attraction, to confront one of the Japanese guards who tortured him.

It is a story of courage, redemption and forgiveness. And it's true.

What might have been layered with sentiment and illustrated by scenes from former POW movies, with a weeping wife in the wings and Lomax shouting at her, "Don't ever interfere with matters that do not concern you," followed by a kind of apology, "I'm still at war," avoids the traditional booby traps and comes through with an honesty that gives the film a sense of purpose far greater than any trailer or treatment might imply.

Colin Firth has come a long way since Darcy's wet shirt in Pride & Prejudice and the toffee-nosed spoilsport from St Trinian's. After an Oscar for The King's Speech and a Golden Globe for A Single Man he doesn't have to say sorry ever again, certainly not here, where his thoughtful, emotionally cauterised performance as Lomax is perfectly judged. Also mentioned in dispatches is Nicole Kidman's sensitive portrayal of the lady on the train, so beautifully understated.

Kwai? This matches its power and its glory, like a bookend. 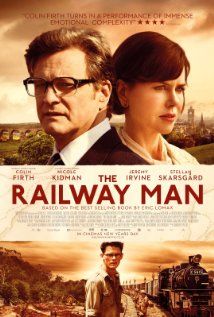 The true story of Eric Lomax, a victim of the Second World War's "Death Railway", who later in life sets out to find the Japanese soldier responsible.

The Bridge On The River Kwai