The Governator returns to his day-job in an off-kilter action romp from wildcard Korean director Kim Jee-Woon. Like his popular previous efforts I Saw The Devil, The Good, The Bad, The Weird and A Tale Of Two Sisters, Jee-Woon shows how to inject style and energy into well-worn genres, but he often struggles to keep control of his runaway narratives. Andrew Knauer's screenplay tries to embrace Neo-Western tropes, but the absurd humour and stylised violence doesn't do the deceptively simple but multi-stranded plot many favors. It's nice to see Arnie acting his age at last, incorporating his creakiness into a nicely judged performance that's the flip-side to Sly's steroid-addled invincibility, but the bizarre supporting cast and dragged out, tension-free set-pieces leave The Last Stand struggling to stay on its feet for the duration.

Aging small-town Sheriff Owens is looking forward to a quiet weekend, with most of Summerton Junction's residents away on a kids' trip and his biggest trouble-maker Frank safely behind bars til Monday. However, his nose for trouble soon picks up the scent of a couple of shifty-looking interlopers, while an infamous drug-lord is thought to be headed his way having escaped the clutches of the FBI. With next to no weapons and lacking even enough vehicles to set up a road-block, Owens must turn to local gun-goon Lewis and his prisoner to help his small group of police officers stop a pack of rampaging criminals hell-bent on getting their leader across the border to a Mexican safe haven.

With a wildly diverse ensemble ranging from Forest Whitaker's frustrated FBI agent to Luis Guzman's comedy sidekick and a double whammy of villains in Peter Stormare and Devil's Backbone heart-throb Eduardo Noriega, Schwarzenegger wisely tones down his previous big-screen persona and slips into a sort of late-in-the-day charm that actually works in his limited acting range's favor. Even his trademark one-liners are a little thin on the ground, but the few he does deliver certainly pack a punch. There's forgettable support from Jaimie Alexander and Zach Gilford, and a deeply annoying turn from a gimpish Johnny Knoxville, but Arnie's tentative return to his action roots is all the better for acknowledging how long in the tooth he is getting.

This stands in stark contrast to Jee-Woon's crazy streak, making for occasionally sublime silliness and an all-bets-are-off appeal that sadly only delivers on its potential in a few places. Many of the action sequences are just shooting gallery nonsense, with the few moments of invention coming too far apart to really raise a pulse. That being said, even Arnie's back catalogue has few sights to match the image of a pension-age sheriff shooting a baddie in the head mid-air as they throw each other off a building. Some of the violence nears Statham-esque levels of ridiculousness.

Unfortunately, the brutality of said violence also sits uneasily next to the labored comedy aspects, and anyone who found Django Unchained to be in poor taste may also feel uneasy with the gun glamorisation and racial stereotyping here. The side-stories also fail to add much interest to the main event, with the coolly menacing but barely involved Noriega and Whitaker's slow-coach agent feeling like an unnecessary afterthought right up to the underwhelming climax and cheesy denouement.

Overall, The Last Stand marks a serviceable and reasonably fun return to our screens for a lovably creaky hero, although how much longer he can pursue this kind of schtick seems debatable. Jee-Woon could have picked a better vehicle for his Hollywood debut, but it's unlikely to cause his career any harm. The script flirts with themes of American attitudes towards immigrants and the hypocrisy of the law - there's a nice irony to the non-American Arnie's attempts to prevent Noriega from getting back to his character's homeland - but ultimately there's not quite enough style, substance or memorable action to raise this above average. 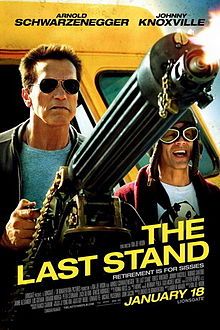 A small town sheriff is the only one who can prevent the leader of a drug cartel from escaping justice.