Remakes are like quicksand. Directors can be sucked down, suffocating their reputations. In the true spirit of individuality and independence, the Coen brothers don't give a damn. They have taken Alexander Mackendrick's classic British comedy of the Fifties and transported it to a small town in the American South.

Before anyone screams "Sacrilege!", let it be known that their adaptation of William Rose's screenplay takes so many liberties that the two films share a common theme and that's about all. This isn't Gus Van Sant making Psycho as an exact copy, rather anarchic invention loosely tied to distant coat-tails.

Also, let's face it, the Coens' Ladykillers is funnier.

The essential story of a gang of crooks, masquerading as musicians, who use an old lady's house from which to plan a robbery, remains more or less intact. Mrs Munson (wonderful Irma P Hall), the strong minded, God fearing owner of the room-to-let is an altogether different kettle of grits to the kindly, sweet natured Mrs Wilberforce from the original.

The gang is far less credible as a musical ensemble. Take a look at them and the concept of artistic endevour is furthest from your mind. Nutters perhaps, eccentrics yes and dodgy (American equivalent) geezers absoflippinglutely!

The Professor, leader and spokesperson, is a man of many words, convoluted, obtuse, pseudo academic and fulsome with flattery. The script excels in providing him with language to suit his ennobled position amongst the highest echelons of confidence tricksters and Tom Hanks gives a performance that can only be described as inspirational.

The comic business, which involves digging a tunnel from Mrs M's basement to the offices of a floating casino, is consistently inventive and the cast of crooks does not stand out as dangerously odd, as this is the South, where the poster in the cop shop reads, "Re-elect the sheriff. He is too old to go to work."

The Coens have retained the services of T-Bone Burnett as musical director, after his memorable work on O Brother, Where Art Thou? The result is a sublime soundtrack of spirituals and assorted Southern gems.

To make or to remake, that is the question. The answer depends upon the degree of irreverence applied to the source material. It is better to be brave than to be nice and the Coens are nothing if not contrary. 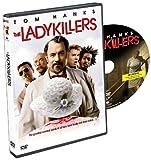 The Ladykillers
O Brother, Where Art Thou?