The Hunger Games 2: Game Hungrier picks up right where the first one left off, give or take a year where absolutely nothing worth mentioning has happened to any of the characters. To recap: the future USA is divided into 12 impoverished districts, oppressed by a wealthy elite who reside in the capital. Every year a lottery is held in each district to select two teenaged tributes, doomed to battle to the death in quasi-gladitorial combat for the entertainment and mollification of the downtrodden masses. Except! In last year's games, a bold appeal to popular sentiment meant two victors emerged instead of one. Now all they have to do is spend the rest of their lives under intense public scrutiny while pretending to be lovers.

Get all that? Good. It's taken as read that you're familiar with at least the previous film and probably also the series of bestselling novels. No time is spared for getting the viewer up to speed: there's a lot of film to get through and only 146 minutes to do … wait, what? Well, if you've got two and a half hours to play with, it must be pretty jam-packed with developments to prevent you from … no? It's 90 minutes of nothing much happening followed by 50 minutes of running about and shouting? Oh.

That's a little unfair on the first 90 minutes. It's a moderately entertaining costume design showcase interspersed with teenage love-triangle angst and scenes of fascist repression that'll look very familiar to anyone who's played Half-Life 2. Last season's winners are taken on a victory lap of the districts, a stunt dreamt up by President Snow (Donald Sutherland) to quell rebellion. President Snow is clearly a rubbish evil overlord without the faintest idea what he's doing. When—surprise—his plan backfires and the sight of plucky victors Katniss Everdeen and Peeta Mellark (Jennifer Lawrence and Josh Hutcherson) merely prompts further discontent, he decides that throwing them back into the Hunger Games will solve everything because it worked out so well for him before. Last season's winners? No: last season's losers.

Digs are made at reality television and the cult of celebrity. The lavish lifestyles of the rich are contrasted with the desperate suffering of the poor. We're introduced to a cast of supporting characters. And so it goes. We have ruthless career killers, physically unimposing mechanical geniuses, silent masters of camouflage, seeming antagonists who later turn out to be friends, the works. Elizabeth Banks returns as Chris Rock in The Fifth Element, Stanley Tucci is splendid as Riccardo Montalban playing Cat from Red Dwarf playing a gameshow host, and Woody Harrelson continues riding the comfortable “dysfunctional mentor” groove he's worn for himself. In fairness, he's very good at it.

Everyone's fantastic, actually. Donald Sutherland revels in exuding quiet menace, Philip Seymour Hoffman makes an impact despite having only a couple of minutes of screentime, Josh Hutcherson and Liam Hemsworth put as much into Interchangeable Love Interests A and B as can be reasonably expected, even Lenny Kravitz manages to impress. All of this while 95% of the time the camera is pointed squarely at Jennifer Lawrence.

Less forgivable is the final 50 minutes of aforementioned running around and shouting. There's some stuff with killer baboons and lightning trees that I'd rather not get into. There are some bits where you get to see Jennifer Lawrence Doing Things and the world is temporarily okay, but even she can only do so much with lines like “Run! Run! The fog is poison!”.

In short, books and films are very different beasts, and you shouldn't try to convert one to the other by copying it verbatim. 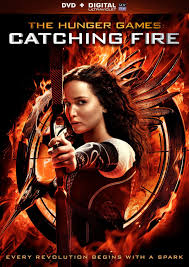 The stakes are raised for survivor Katniss as she is forced join a champion of champions tournament.