The Hobbit: The Battle Of The Five Armies

In the run up to the release of this final (or maybe not final) chapter of director Peter Jackons’s film adaptions of JRR Tolkien’s Middle-Earth fantasy series - The Hobbit: The Battle of The Five Armies - the Twitter hashtag #onelasttime was seen floating about from the studio marketing team. It sounded as much a plea to the weary as a cry of celebration.

It was never preordained that the Hobbit series would automatically fail to live up to the original trilogy, but Jackson’s return to Middle Earth was always going to have to fight against the sense that it was a result of a director playing it safe, a cash-in stretched beyond the material - and not least because viewers have now been given three films drawn from the quite short novel.

Now we're at the end with Five Armies, its fair to say Jackson has got us “there and back again” with some flair, but this bloated, intermittently impressive trilogy, staggers rather than races to the finish line. Five Armies ends the series doing what it says on the tin: given us a whopping amount of carnage outside the Lonely Mountain where our main characters - Bilbo Baggins (Martin Freeman) and Thorin Oakenshield's (Richard Armitage) Dwarf band - have been holed up since the end of the previous film. Characters who have been split up over the course of the three films eventually unite for this epic showdown in the mountain’s shadow, as armies of Orcs and nasty beasts attempt to seize the mountain and its treasure for the armies of the evil Sauron. Elves, the humans of Laketown and Thorin’s dwarf allies all try to do the same. There are deaths, tears, and a lot of wide angle and birds-eye view shots of massed ranks of CGI creatures colliding into each other. It’s a thrilling, ultimately exhausting spectacle that sadly ends up smothering what has always been the strongest aspect of this series: the generally excellent cast.

Before this melee even happens, we have to get a holdover from the middle film out of the way: the dragon Smaug. Smaug has been by far the most interesting villain in a film too full of faceless ones (CGI orcs really don't have the personality) and Benedict Cumberbatch turned out to not just be stunt casting for the voiceover work, investing this CGI beast with a mix of power, arrogance and intelligence. Smaug was an intriguing and imposing presence in the second film, and the heroes' tangles with him in the maze-like subterranean mountain halls was more than adequate payoff after a build-up over the course of two movies.

Smaug finally gave the Thorin and company a worthy antagonist to square off against, as opposed to Sauron, who’s presence in this film does give returning characters Gandalf (Ian McKellan), Saruman (Christopher Lee), Elrond (Hugo Weaving) and Galadriel (Cate Blanchett) their own mini-quest with some nice action beats (Saruman gets to do some badass staff swinging), but is ultimately tangential and feels like squeezed-in foreshadowing and fan service for LOTR junkies.

Smaug’s burning of Laketown is a highlight of the film, but he sadly soon falls victim not just to an iron arrow, but also to editorial choices. Jackson’s decision to split the second and third films at the point where Smaug attacks Laketown means the venerable dragon is dead in the first ten minutes.

Post-Smaug, Five Armies does offer up plenty of warring across plains, frozen lakes, gloomy towers and high city walls, all lovingly created via that winning combination of the natural beauty of New Zealand, WETA Workshops, and the best computer systems money can buy. No one at this point can doubt Jackson and his team’s technical prowess and ambition. But more combat means less time for character interaction, and by the third act, Jackson has already shoehorned in more characters than the film can handle.

Aside from a wizard trio, we have elven queens and kings, the hobbit and his dwarf mates, Legolas and new character Tauriel all engaged in their own side stories. Hardly any of the cast get much to say to each other beyond shouting, “We need to run up that hill!” once the slugfest opens up, and then they are too busy hacking their way through legions of goblins and wolves, in action scenes too reminiscent of the earlier films (think tracking shots of characters on horseback barreling through hordes of enemies). The mostly CGI-augmented characters too often lack a sense weight as they leap, Mario-style, from ledge to ledge.

When Jackson does pause things to return us to the two friends at the heart of this series - Bilbo Baggins and the wily wizard Gandalf - it serves a reminder of the series’ core strengths and it’s appealing underlying, but often drowned out, theme of how the salvation of this Middle Earth lies with the most unexpected of peoples and the bonds that they make. Martin Freeman and Ian McKellen make the most of the few minutes of quiet that they have. Freeman and Richard Armitage (as Thorin) have also proved to be a fine pairing, giving the series one of its strongest emotional arcs as the nervy Bilbo and regal Thorin developed an unlikely but convincing friendship. That is tested further here, as Thorin’s newly-acquired gold horde warps his mind further.

The Hobbit series has been an uneven experience, even a weird one. So many strengths; great casting, technical wizardry, but all fighting against a sense that there isn't the material there to justify all this game-playing in what is essentially the same sandpit. Much time and money has been spent making this series look exactly like the previous trilogy, right down to the point where the characters seem to be marching over the same fields and hills as the last fellowship. Yet this new trilogy is born from ten years of advances in CGI and other technical areas. It looks and feels the same and yet in some ways it doesn’t (Orlando Bloom as Legolas is looking particularly photoshopped these days). The result is a weird mishmash of registers that might not make for as smooth a viewing experience as fans might want from watching all six films in one go - as they surely will be planning to do.

As Bilbo trudges back to Bag End, this Hobbit series behind both him and us, it seems appropriate to note that lesser directors might well have been overwhelmed by the challenge of hammering these books into a series that has won such mainstream appeal. Jackson ends this film cycle crowned as a world-builder extraordinaire, perhaps matched only by Christopher Nolan for his ability to handle the epic. 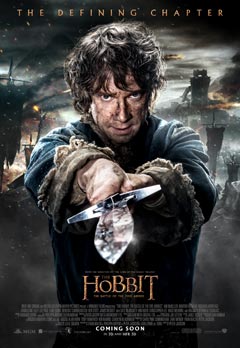 Bilbo and his pals do battle at the Lonely Mountain as the trilogy draws to a close.