Samuel L Jackson has been ittybittering far too long. Support roles in lay-down-and-kick-my-brains-out movies is wasting the man's talent. He deserves a plot that doesn't bleed out and a script that sparks in all the right places. This might be the one. Or not.

Cliches are good. You know where you are with them. Badass killer for hire Darius Kincaid (Samuel L) needs a bud, or perhaps a foil. How about Michael Bryce?

He used to be a contender in the bodyguard biz before one of his top clients was sniped in plain sight. Result: he lost his girl (Elodie Yung) and his rep. A tough call.

Bryce is a cool operator. He's played by triple A graduate from The Charm Academy of Western Canada, Ryan ("Don't call me Gosling") Reynolds, otherwise known as Oozy Smoozy.

The storyline follows that of Midnight Run where Robert De Niro had to escort mob accountant Charles Grodin from New York to L.A for an important mafia trial with bounty hunters, cops and gangsters after them. Here you have Kincaid escorted from a high security lock up to the Netherlands to be chief witness in the trial of Vladislav Dukhovich (Gary Oldman), dictator of a former Soviet Union state, whose henchmen attempt every known act of violence to stop this happening.

Essentially a field day for stuntmen, the movie is a high octane, low credibility caper. The banter is one-lined ("Hamburgers know more about women than you do") and well intentional ("You're as useful as a condom in a convent"). The chemistry between Samuel L and Oozy Smoozy ignites and the car chases are the best for years.

Entertainment values are not in doubt, but originality is lacking and when you shoot a guy is the leg and he extracts the bullet himself in a hotel room you might expect this to slow him down. Don't be silly. Hollywood Rules, OK?

"No one in this world can kill Darius Kincaid," someone announces.

That's a given. He shoots straight, too. 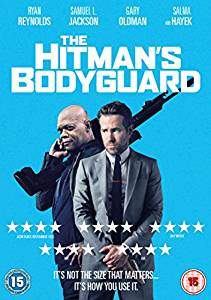 A top professional bodyguard gets a new client, a hitman who is required to testify at the International Court of Justice. They must put their differences aside and work together to make it to the trial on time.