The Goalie’s Anxiety At The Penalty Kick

This peculiar but affecting entry from Wim Wenders' back catalogue is a moody little oddity, adapted from the book by Peter Handke. Though the director has claimed he took inspiration from Hitchock, the result has more in common with the aloofness and almost glassy emotions of "the French Hitchock" Claude Chabrol.

The goalie of the title is Joseph Bloch (Arthur Brauss), who we meet as his disinterest in a football game proves costly - and the sense of detachment shown here will go on to resonate throughout the film. After being sent off, we begin to follow his progress through the city, mostly at night, with strange exchanges that drip with anxiety despite the fact that he radiates a sense of being unable to care less. The tension is enhanced by Wenders' almost square framing that trap the characters tighter than a goalie within his goalposts. Bloch's progress is punctuated by the buying of newspapers, the almost talismanic presence of American loose change and the playing of jukeboxes, his sexual encounters - deed first, names later - seeming as random as which record he chooses to play.

A ready supply of non-sequiturs in the script only adds to the feeling of dislocation, such as Bloch's quizzing a girl about ants in her teapot, and when the film suddenly turns on an act of violence, he displays no more emotion than when he later chooses a shirt. This is toxic masculinity masquerading as boredom, with Wenders' refusal to give it emotional adornment only adding to the sense of existential strangeness of the whole affair.

Long unavailable because of the problems and extreme expense of obtaining the music rights, the 4K restoration of the film that is now available on DVD and Blu-ray features new scoring by Michael Beckman when music is used only transiently, with Wenders saying that the "difference between old and new is imperceptible or nearly so in most cases". It's the colours that really make this film pop, however, as Bloch's time in Vienna is marked by repeated intrusions of bright red, while the second half of the film, which journeys to the countryside, is suffused by cool blues that only make the red hair of Bloch's old flame Hertha (Kai Fischer) seem all the more other worldly. Those US coins - that can bring good or bad luck on the football pitch or, we learn, elsewhere - are just one element of Americana and a hint of the faded American dream at play here and which would go on to play a large part in Wenders' later work.

The studious coolness of the film and Wenders' refusal to do more than flirt with the ideas of a psychological thriller means it suffers a little from the reflected boredom of its central character, but this is well worth seeing for early notes of the filmmaker who was to come. 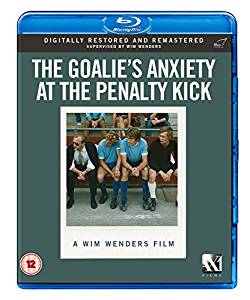 Following in the footsteps of a goalie after he is sent off in a game.

Writer: Wim Wenders, based on the novel by Peter Handke