The Flavour Of Green Tea Over Rice

Made the year before Yasujiro Ozu's masterpiece Tokyo Story, The Flavour Of Green Tea Over Rice is a gently enjoyable, if rather languorous, domestic drama - this time about the cracks beneath the surface of a middle-class marriage. The title takes its name from the way Mokichi (Shin Saburi) likes to eat his dinner - one of the many small ways his middle-class habits manage to irritate his more upper-class wife Taeko (Michiyo Kogure), who refers to him among her friends as Mr Bonehead.

He's actually a rather sweet, if dull, salary man, with an auspicious past in the army, whose arranged marriage to Taeko has evidently been more tolerable than smooth - with no children and increasing amounts of friction that reveals itself more through gesture than conversation. One of the places Mokichi goes after work is named the Bittersweet School of Life pachinko parlour - a hangout where workers go to play pachinko, a sort of complex bagatelle arcade game - but its title and practices provide a microcosm of this movie, which balances the sweet and bitter of marital life and where the "light touch"  that can win a game is also shown to lead to more successful relationships than heavy handedness.

The emphasis is on the bitter at the start, with Taeko lying to her husband in order to go off on a bitchy break with a female pals. Along for the ride is her niece Setsuko (Keiko Tsushima), whose reluctance to enter into the sort of arranged marriage that has led to Taeko's current resentful predicament allows Ozu to further explore the pros and cons of the tradition. We get the full blast of Taeko's personality, not just from her no-nonsense scripting but in her traditional dress - in contrast to the more 'modern', westernised clothes worn by most of her friends - and because Ozu frequently frames his characters so they are looking directly into the camera so that we feel the weight of their personality. Ozu also shows a keen eye for humour, particularly in the conversations between the women, when they vacillate between conspiring with and admonishing each other.

As the film progresses, we see the younger generation, while still being mentored by the older characters - Setsuko, and young salaryman Non-Chan (Kôji Tsuruta), who is taken under the wing of Mokichi - starting to make their own decisions, while the older generation find their hypocrisies coming into sharp focus. There's a simplicity to Ozu's films that allows details to become important, so that almost every gesture between Mokichi and Taeko takes on weight as something more sweet begins to seep into the narrative. Ozu takes his time but if you're willing to relax into his rhythms, this is a low-key charmer with plenty of heart. 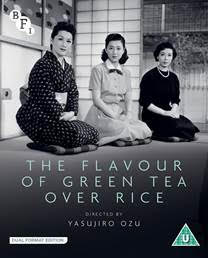 Cracks start to show in a middle-aged couple's marriage.