Belgium-based actors Dominique Abel, Fiona Gordon and Bruno Romy are the modern generation of a slapstick lineage stretching back through Jacques Tati to Buster Keaton and beyond. While the likes of Rowan Atkinson put the emphasis on general bungling, their physical comedy is altogether more absurdist and, in keeping with this particular film's title, fey.

Their feature debut Iceberg, was rather rough around the edges, feeling more like a string of sketches than a genuine narrative, but with this, their third full-length outing after 2008's Rumba, they show they have learned a thing or two about plotting and development, even if there is still room for improvement.

The action is set in Le Havre - a choice, which along with its air of whimsy and timelessness that would make it a great double-bill companion piece with Aki Kaurismäki's film of that name. Gordon is Fiona, the fairy of the title. At least she thinks she is. Turning up barefoot at the hotel where Dom (Abel) works as a night-time desk clerk, she asks for a room in return for granting him three wishes. After obliging her with wishes for a scooter and a lifetime of petrol, he gets stuck on the third at the same time as getting stuck on her.

It's a smart set up for what becomes a tale of blossoming, off-kilter love, as Fiona gets banged up in pregnancy and psychiatric terms and Dom tries valiantly to rescue her, crossing paths with a hopeless British tourist (Philippe Martz, aptly named Johnny English), a myopic barman (Romy) and a trio of illegal immigrants (Vladimir Zorano, Destiné M'Bikula Mayemba and Wilson Goma) along the way.

The film has a better narrative flow than their earlier movies, although some of the gags inevitably work better than others. Sometimes the visually arresting craft of Gordon and Abel is more to be admired than laughed at, but there is darkly comic joy to be had in some business with a baby, not to mention a dog and a drain, as well as some surprising moments of poignancy courtesy of Kurt Weill's Youkali and the plight of the immigrants. Those who dislike slapstick may well find it as funny as being hit on the head with a hammer. Those who do, are in for a treat. 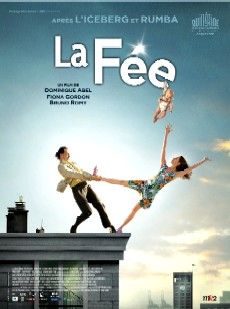 Anarchic comedy involving a fairy and a receptionist at a seaside hotel.