Jesse Eisenberg plays nervous inhibited Simon James and his confident Machiavellian double, James Simon, in Richard Ayoade's muggy adaptation of Dostoevsky's novella The Double. Set in a grey-yellow dream time of undistinguished past or future, subway cars from what looks like the middle of the 20th century bring our timid hero to his nightmarish office dungeon, where Kafka's threshold guardian meets Terry Gilliam's bureaucratic divinities.

A nonentity for the guard, no matter how long he has worked in the same place, and a malfunctioning ID produce in Simon the overwhelming dread that aligns so well with his private life. We see him feeding his mother some disgusting looking food in the dreary home for the old where she lives with her witchy pals. Clocks are ticking, dialogues are all too whispery and ominous.

At his cavity of a home, on his military bed, to signal the relaxing part of his day, he changes into white sneakers and spies on his neighbor and co-worker, lacy white-clad Hannah (Mia Wasikowska) through the rear window across the courtyard. The stalking is very familiar and Ayoade nods his head to Alfred Hitchcock and Krzysztof Kieslowski with blue glass beads chiming in the wind.

In this case, peeping Simon runs over to the garbage chute to collect the bloody finger paintings Hannah smears and tosses. In the nightly courtyard (there is no outside daytime in this world), he runs into the suicide squad, detectives who investigate nothing but suicides and who predict and even recommend Simon's own.

Enter his double, James Simon, who looks like him and sounds like him, only he is confidence personified and confirms with every gesture that Simon is really "a bit of a non-person". In the scenes between the two at a nightly diner and in the subsurface office, Eisenberg's performance(s) unites a wretched sense of entrapment in fated traits with much pined for humor. "I'm like Pinocchio, I'm a wooden boy," turns out to be a handy line. Mentors, rivals, enemies, the men's relationship is a battle of ghosts with Eisenberg's face. "You are no longer in the system. You never existed - you can't get a card because you're not in the system."

Sally Hawkins makes a brief appearance playing a receptionist who, with much relish, dishes out administrative torment.

When the confident double takes over and asks for the keys to the other's apartment to meet with the girl of his stalker dreams, I wished for Billy Wilder's spirit from The Apartment to take over the tone just a little bit and deliver us from dread while exposing it. 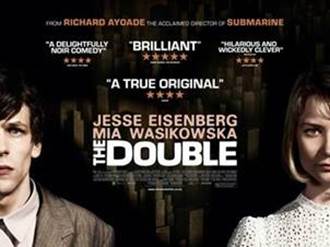 Jesse Eisenberg finds his world turned upside down by the arrival of a confident and ambitious doppelganger.