Bryan Forbes' slice of social realist workshop drama was controversial when it was released back in 1960 - and was even briefly banned in Welsh miners' union clubs in Wales, before star Richard Attenborough intervened. Even today, the subject matter is surprising. While most films about working class factories tend to portray unions in a heroic light, here writer Forbes (working from an original script by Richard Gregson and film co-star Michael Craig), draws on the backdrop of the industrial relations of the time to depict the workers as vengeful wildcats in the face of one man's right to look after his family.

If the film takes a broad brush approach to its issues of individual rights versus the collective - and dips into melodrama in terms of the violence portrayed - Attenborough is a master of subtle emotional shift. He has rarely been better than he is in the central role of family man Tom Curtis, revealing the pressure he is under in sudden bursts of emotion, which are over in a flurry of remorse or upset almost as soon as they begin. When fellow workers are rabble-roused by shady incomer Travers (Alfred Burke) and their shop steward (Bernard Lee) to take unoffical strike action, Curtis refuses to walk out and soon finds himself not only ostracised by his colleagues but also his fence-sitting best friend and lodger Joe Wallace (Michael Craig). With two kids and pregnant wife Anna (Pier Angeli) at home, Curtis finds he is forced to lie in the bed he has made for himself as the situation escalates.

No opportunity is wasted to show the world closing in on Curtis, from the factory boss's distrust of a man who wants to stand alone to the way in which newspapers and TV crews 'doorstep' him and his family (look out for an uncredited Forbes as the journalist who talks to Anna), but every time Attenborough takes centre stage for a showdown or emotional chat with his wife, his performance sweeps you back in, so you forget the film's rough edges.

The portrayal of women generally is worthy of note. While the men are, at best, depicted as unreformed likely lads, and at worst predators, the women are uniformly savvy, sympathetic and unafraid of making their voices heard. One of the key moments of the film sees not Curtis but Anna attack Wallace for his stance, showing that revolutions of individuality were happening away from the workforce too.

Director Guy Green makes great use of the engineering works shop floor, showing it echoing and eerily still when Curtis returns alone. There are also one or two bravura directorial moves, such as when we are transported from a moment in Curtis' memory to the reality of the here and now, as his stoicism finally begins to break and Green amps up the sound to transform the mood to horror.

Craig's story certainly stands the test of time but his acting is less enduring. Cast against type here as a working class lad - presumably because of his hand in the writing process - his 'wotcha' accent frequently throws a wildcat strike of its own, allowing his altogether posher vowels to be revealed. Angeli is a perfect match for Attenborough, however, and their characters' British/Italian marriage also gives the film a modern edge. It was the first production by Forbes' and Attenborough's Beaver Films company that would go on to make the equally interesting Whistle Down The Wind and Seance On A Wet Afternoon. The fact that The Angry Silence is steeped in a particular time period and mood is part of what makes it so fascinating. 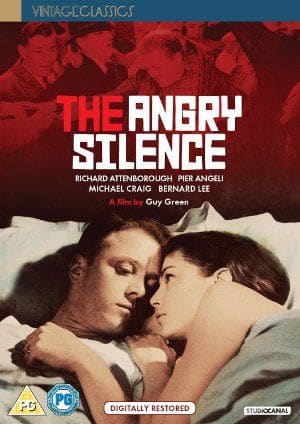 A factory worker is ostracised after refusing to join a wildcat strike.

The Stars Look Down