Arguably the greatest horror film of all time, The Texas Chainsaw Massacre heralded a raw new talent in co-writer/director Tobe Hooper (who also supplied the astonishing industrial soundtrack) as well as a new wave of weapon-wielding, sub-human psychos stalking scantily clad youths, fostering a body count mentality that has dogged horror to this day. Despite being on permanent display in New York's Museum Of Modern Art and being just as socio-politically astute as Romero's Night Of The Living Dead a few years earlier, the film has been lambasted for its nastiness and has suffered notorious distribution and censorship traumas, despite becoming an overnight sensation and featuring very little on-screen gore.

Frustrated by how little of his black humor was appreciated, Hooper took his belated 1985 sequel in a totally different direction, ushering in another new wave of horror-comedy with the emphasis on uncomfortably OTT splatter (Peter Jackson and Sam Raimi may well have been taking notes). Since then, the franchise has revved back up in fits and starts, with only 2003's remake proving effective on its own terms but still failing to come anywhere near the petrifying impact of the original. This new entry is touted as a direct sequel to the 1970s events, automatically piquing fans' curiosity but also giving it helluva big boots to fill. What has emerged is hard to recommend with a straight face, but it does at least take Leatherface to some unexpected places and it's often a rollicking good time in spite of itself.

1973: after a spate of bizarre occurrences and grisly murders, a bloodied and traumatised Sally Hardesty tips police off to the whereabouts of cannibal clan The Sawyers, leading to a stand-off between locals and the meat-loving family that sees their homestead burnt to the ground with everyone in it. One of the locals happens to find one of the Sawyer children, and steals the baby for he and his wife to raise as their own. But blood proves to be thicker than water, and when a grown-up and disgruntled Heather receives notification of her inheritance of a farmhouse in Texas, she takes her friends on a road-trip to try to reconnect with her roots. Arriving at the country estate, the group can't believe their luck to find a beautiful, well-preserved mansion, but little do they realise there's something in the basement that will bring Heather a whole lot closer to the truth behind her lineage.

Things get off to a shaky though promising start: the transition from some woefully CGI-sunlight-bathed original footage into the recreation of what occurred after Leatherface's iconic chainsaw dance isn't exactly seamless, with a completely unconvincing actress supplying a voice that sounds nothing like Marilyn Burns' Sally and a modern-day Bill Moseley making an unconvincing replacement for Jim Siedow's cook. It's comparable to George Lucas dropping Sam Jackson into his old Star Wars films: it just doesn't work, while the notion of the Sawyer clan being so much larger than the three brothers of the original (women and children included) completely flies in the face of the disturbing sexless nuclear family Hooper and Kim Henkel subversively envisioned, where the boys had become self-sufficient and trapped in their past, without any interest in progress or the opposite sex (whose roles Leatherface had approximated).

An intriguing attempt at pathos involving the family's protection of Leatherface hints at tonal problems to come, although the arrival of a bible-backed Night Of The Living Dead-style lynch mob makes things look to be a little more interesting, but the jump to the modern day is handled so clumsily that it seems like we've veered into a Scary Movie sequel. Our heroine Heather is introduced as a gothy supermarket butcher with a worrying hobby in bone art; these represent embarrassingly obvious and hard-to-swallow references to her roots that combine with the awful script and woeful supporting performances to really test fans' patience. Signposting a vague nature versus nurture theme, her interactions with her adoptive family and journey out to her inherited estate work hard to reference Hooper's mythos (the Scooby Doo van, the ogle-inviting red shorts, the pit-stop encounter with unsettling locals), but Luessenhop is clueless when it comes to establishing a menacing atmosphere, something even the remake's Marcus Nispel achieved brilliantly due in part to the re-employment of original cinematographer Daniel Pearl.

Once we reach the mansion, the stereotypical partying teens' behavior grows increasingly grating and unrealistic, but a few intriguing plot points begin to rear their head, and tension mounts nicely to Leatherface's big entrance, a brutally splattery return complete with noise-enhanced jolt. As the mayhem commences, the script doffs its cap to everything from Lucio Fulci's City Of The Living Dead to Hooper's The Funhouse, simultaneously piquing interest and insulting intelligence at every turn in a manner that's somehow as frustrating as it is bizarrely enjoyable. The gore and deaths are inconsistent - some key characters are dispatched off-screen or by accident, while others who've failed to register are randomly gifted the most stomach-churning demises - but there's a dumb, playful energy that keeps you on the edge of your seat, guffawing in disbelief one minute and squirming in horror at some pretty nasty practical effects the next, although the 3D adds next to nothing other than a slightly more in-you-face chainsaw and CGI blood-sprays.

Some of it is so lame-brained that it's undeniably entertaining, showing a misplaced affection for the original that's charming by dint of being so idiotic. It's as if Leatherface himself had written a family-centred fantasy about what might have happened to him after the events of the original, and someone in the real world has tapped into it. There are nice references to Ed Gein's influence and would-be subversive appropriations of such cliches as the dubious hitch-hiker, hick townsfolk and blood being thicker than water, while Leatherface's characterisation is a lot truer to Hooper and Henkel's original vision than the remake was; at least here he's the same pathetic, dumb, borderline sympathetic goon of the 1970s and not merely another invincible Jason Voorhees-style behemoth.

Like the remake's hilarious rain-to-freezer chase being designed purely to even more gratuitously showcase Jessica Biel's considerable curves (that whole film was like one long money shot), poor Alexandra Daddario is ruthlessly put through her exploitation paces, culminating in a climactic ripped blouse moment with an attempt at justification that will have viewers howling. When your heroine is subjected to not one but two illogical back-to-back stumbles, you have to wonder if the writers are nodding to their audience, and if you're willing to wink back and cringe along you'll probably enjoy such post-ironic stupidity. Meanwhile, their earnest attempts to throw some actual themes into the mix are to be commended even though they lead to major pacing problems, and a succession of ridiculous one-liners that we won't spoil here will at least give you your moneys' worth in piss-taking quotables.

Unlike the merely disappointing reboots of A Nightmare On Elm Street and Friday The 13th, this new Chainsaw has a camp corn factor that could see it become a future six-pack favorite. This could well be counted as at least a fourth franchise-starter (the original already had two sequels, then a reboot with The Next Generation and the remake that received its own prequel), and as such is so inherently hard to take seriously that its sheer brazen balls and almost soapy story-line will be appealing for some trash and TCM aficionados. While the many gaping plot-holes and glaring flaws are inexcusable (how Heather happens to be in her twenties 40 years after the events of the original is a sign of the quadruple-authored script's stupidity that will go down in cinema history), it's also lots more fun than many recent horror flicks; in the pantheon of Texas Chainsaws, it's somewhere in the middle, mostly lacking the raw edge of the best entries but serving up plenty of the goofball lunacy they sometimes deliver. It's gonna split audiences down the middle as neatly as Leatherface's chopping between those who despise it and those who kinda appreciate it for the retarded little bastard it is, but it'll certainly be interesting to see where the family go next: there's bound to be life in the old 'Saw yet. 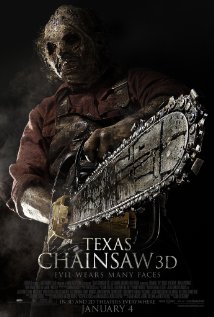 An unknowing descendant of the orginal Sawyer clan goes to visit the old house she's inherited.