There is no stopping these creatures. Multiple TV series in the Nineties and again in the Tens. More than one movie and now the sequel to the sequel. Surely there comes a time in the history of Jack the Pot when turtle mania becomes toxic hernia.

What's interesting about this latest pizza product placement is how enjoyable it is. You don't have to be a CGI 3-D action junkie to appreciate the loving care attributed to something so overplayed and underwhelming, but it helps.

The story structure doesn't exactly divulge the truth about how these reptiles with Renaissance names became fully grown and taller than a double helping of Tom Cruise, although it tries. The central plot is that old fave of the superhero genre - world domination - in this case by an evil billionaire scientist (William Fichtner). The flashbacked sub plot is how April O'Neil (Megan Fox), daughter of the evil scientist's goody-goody partner who died in the fire that should have destroyed their lab, saved the turtles ("They were going to be rabbits," the bad boffin tells her) after they had been dosed with chemicals that made them mutant.

Anyway, that was then and this is now.

The Shredder and The Foot Clan are in the pay of the evil billionaire who plans on poisoning the people with death gas. The giant sewer rat, Splinter, kung fu teacher of the teenage turtles, stands between the Footy folk and a city load of innocent New Yorkers. April, a junior member of the local TV news network, stays on the case with the help of her loyal cameraman (Will Arnett). She is pretty enough to manipulate emotions (in a good way) and smart enough to stay alive to witness martial artistry, comic book style.

You want to stay with her. 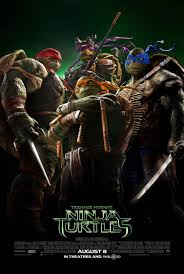