Tea & Sangria is a culture clash comedy inspired by British writer-director Peter Domankiewicz's experience of moving to Spain. We meet David (Domankiewicz, in his first acting role) as he arrives in Madrid to move in with his Spanish girlfriend Marisa (Ángela Boix). With minimal Spanish - and having given up his job, home, and friends - David finds it difficult to acclimatise to the Spanish way of doing things. In combination with Marisa's unwillingness to compromise her lifestyle to accommodate David, this causes the couple to soon part company. We then follow David as he sets off to find his own way in the wilds of Madrid.

Thereafter, the film interweaves three aspects of David's life - learning the language and being tutored in the ways of the Spanish by Ricardo (Carlos Pontini), teaching English to the employees of a Spanish company led by Atléti-supporting hothead Jose Maria (Daniel Albaladejo), and forming the Brotherhood of the Brokenhearted with new flatmates Pichi (Xavi Lapuente) and Ignacio (Jorge Berges). Misunderstandings, mispronunciations, and conflicting points of cultural reference overlap these strands of David's new life as he learns the finer points of English grammar, how to avoid phrasing all requests as an apology (an inherently British error pointed out by Ricardo), and how to behave with the apparently inconsistent and temperamental creatures known as Spanish women.

In fact, for a supposedly heartbroken and dejected fellow, David has no end of success with the señoritas (and señoras) of Madrid. He soon finds himself - bewilderedly and bewilderingly - juggling liaisons with the ever-present Marisa (who still tugs at his affections), sparky Lola (Nur Aiza), and the decidedly upmarket Tamara (Agnes Kiraly), while retaining fellow language-learner Francoise (Pilar Bastardés) as a friendly confidante. The combination of David's successes with the women and the pep talks from the men (and the film boasts several winning performances among the varied supporting cast) serve to boost his confidence and allow him to build his own support network in this foreign land - but will he get over Marisa? And if not, will he stay in Madrid?

The comedy is generally broad but by extension travels well, breezily utilising stereotypes (fiery Spaniards versus hesitant Brits) that audiences are readily familiar with. One nice illustration of the culture clash is the way the subtitles - instead of running in a straight line along the bottom of the screen - float mid-screen and match the speaking person's position in the frame. This means that conversations and arguments (and their changing dynamics) are visually represented as an exchange, with the technique effectively rendering people's words meeting each other halfway - which neatly encapsulates the lesson that the intrepid Brit abroad and his Iberian sweetheart(s) must learn. 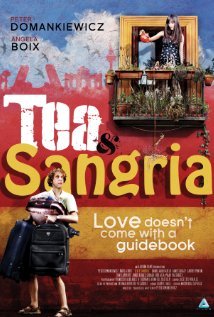 After an Englishman moves to Madrid, only to be jilted by his girlfriend, he find he has to learn to live and love the Spanish way.

The Other Side Of The Bed
Spanish Affair