Although he walks the well-trodden path that leads to the death camps, István Szabó takes a different route. Sunshine is the English translation of Sonnenschein, a Jewish Hungarian family that made a fortune manufacturing herbal tonic at the end of the 19th century.

As the title of a politically powerful, emotionally strong film that follows three generations through the most turbulent period of European history, it conveys less than nothing. Titles are important and it would be unfortunate if a word associated with breakfast cereals caused an outbreak of apathy amongst discerning moviegoers.

Szabó (Mephisto, Colonel Redl) keeps it personal. The story is narrated by Ivan, who survives concentration camp, joins a police unit in Budapest after the war and eventually witnesses Hungary's freedom from communist rule.

Anti-Semitism was endemic in the Austro-Hungarian empire, even during the "enlightened" reign of Emperor Franz Joseph, when rich landowning Jews were accepted into the upper-middle-classes, although not offices of state. "Our people must never climb too high," great-grandfather Emmanuel (David de Keyser) warns his son, Ignatz, who changes his name to further his career in the judiciary.

A theme of assimilation runs through the Sonnenschein story. Ignatz's son, Adam, becomes an Olympic champion after converting to Catholicism in order to join an influential fencing club that bans Jews. Later, once the fascists take control, his adopted religion offers no protection against the pogrom.

"I predict a century of love, justice and tolerance," Ignatz's brother toasts the dawn of 1900. Irony is not lost, neither is passion. The women have a tendency to take matters into their own hearts, or, at least, force the sexual pace.

Ignatz marries his "sister" (wonderful Jennifer Ehle), who is really his first cousin, much to the displeasure of his parents. Adam is seduced into bed by his brother's wife (Rachel Weisz), while Ivan becomes infatuated by the wife (Debrah Kara Unger) of a resistance leader - all, one way or another, illicit.

Ralph Fiennes's triple performance (Ignatz, Adam, Ivan) is a triumph of intelligence over opportunism. What might have been a grandstanding celebration of an actor's ego becomes an exercise in integrity. Sunshine tells a bloody history through the anguish and tribulation of these men.

By choosing Fiennes, the success of the project is assured. Even if the final section is less compelling - compassion fatigue sets in after two-and-a-half hours - and although the title suggests a remake of Summer Holiday, Szabo's saga is a reminder of how great European cinema used to be. 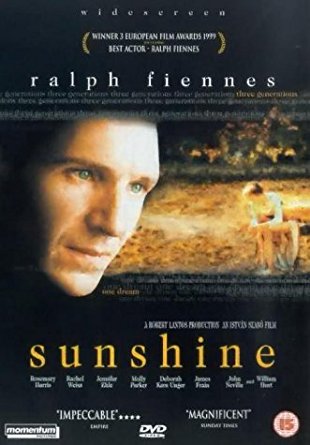 Sobering and powerful film that follows three generations in upper-class Jews amid the early 20th Century.