Few people saw Straw Dogs when it came out, because it was banned almost immediately. The moral majority in England were up in arms at the idea and, anyway, it was directed by that action junkie who made The Wild Bunch. The thought of fresh-faced Susan George being violated by a gang of perverted yokels in deepest Cornwall, while her wimpish husband, played by The Graduate, flaffed about and let it happen, was too much to bear. Also, people don't behave like that in the West Country, or anywhere in this clean and pleasant land. Do they?

David (Dustin Hoffman) is an American mathematician, who comes with his young wife Amy (Susan George) to live close to where she was brought up. How they got together is not explained and feels odd, to put it mildly. He is self-effacing, undemonstrative and a loner. She is spirited, flirty and gregarious. He needs to work, because he's writing a book. She's bored and playful, which annoys him. The marriage is straining at the seams from the very start. Something's got to give.

David employs local labour to repair an outhouse at the farm. They spend too much of their time ogling Amy and treating David with contempt. One of them is her old boyfriend (Del Henney). At the village pub, the mood of mockery is exaggerated. David, the foreign incomer, is made to feel unwelcome and a fool. Even his attempts at reconciliation are dismissed as pathetic. At home, Amy says, "They think you're strange." He ponders this for a moment and then asks, "Do you think I'm strange?" She doesn't deny it. "Sometimes," she says.

A mood of impending tragedy hangs over their lives. The men lure David away to shoot pheasants on the hill, while two of them return to the house and rape Amy. Later, a group from the pub arrive at the farm in search of a simpleton (David Warner), who was last seen with a precocious teenage girl. The siege begins, during which David discovers a degree of assertiveness he didn't know he possessed and Amy's loyalties are torn. Sam Peckinpah achieves a clarity of vision that is strictly American. If an English director had been in charge, the locals would have been more humourous and the horror faintly absurd. There are problems in the story, especially to do with the marriage, and a certain voyeuristic pleasure in presenting Amy and the teenage girl as sex objects - Amy wears tight sweaters and no bra, the girl flaunts herself in a selection of mini skirts.

The rape is extraordinary for Susan George's performance. She is excellent throughout, but especially here. Hoffman internalises his role, so that there is little interaction between the two. He is probably wrong for the part, because you don't believe he's an academic and can't understand what a vivacious 19-year-old would see in him.

The film has been unjustly vilified. It has a powerful impact, not only because of the violence, but because of its visual and emotional clarity. Peckinpah was a seeker after truth. He didn't believe in falsifying fear. All you have to do is look into Amy's eyes. It's real, alright. 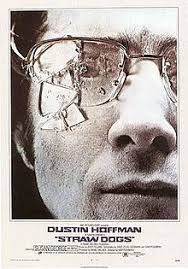 Deliverance
No Through Road