Songs My Brothers Taught Me

"Anything that runs wild has got something bad in them. You want to leave some of that in there, because they need it to survive," one character says near the start of Chloé Zhao's gentle but moving drama of life about young Native American siblings on the Pine Ridge Reservation. And the themes of wildness and survival run strongly through a film that emphasises familial bonding - even along extended lines - without shying away from or wallowing in the deprivation and societal pressures that exist.

The story is less a straightforward narrative than a patchwork collage of reservation life that dives into the family of brother and sister Johnny Winters (John Reddy) and Jashaun (JaShaun St John). And although it is fiction, the story, like its non-professional child stars, has very strong roots in reality, extending to the inclusion of a home fire that actually occurred.

Johnny is on the cusp of adulthood and is dreaming about life beyond the reservation with is girlfriend Aurelia (Taysha Fuller), while 13-year-old Jashaun is on the brink of adolescence. The idea that her older brother might leave her solely in the care of their alcoholic mum and her unsavoury choice of men is a source of dread for Jashaun - who starts to investigate the possibilities of friendship with some of her extended family. For Johnny, it represents just one more thing to feel guilty about given that he is already involved in an alcohol racket, which helps Zhao expose the fact that, despite drink being illegal on the reservation it is the ruining the lives of many while, ironically, providing the youngster with virtually the only option he has to make some cash.

Zhao is in no hurry, allowing the sense of life in Pine Ridge to seep in to the bones of the film, as cinematographer Joshua James Richards captures the natural movement of the place, from the liveliness of hair in the wind to a shower of sparks from a fire. Zhao also draws on life on Pine Ridge - such as a funeral service or episodes of traditional life - in ways that illustrate the strong sense of cultural identity, without labouring the point.

The acting relies on mood as much as scripting, which is sparse but used to good effect, with St John showing the most natural aptitude. Jashaun's scenes with her clothes and tattoo designer distant relative Travis (Travis Lone Hill, whose Rez Life 7 designs feature heavily in the film). He frequently goes on booze benders but has a soft heart that appeals to Jashaun, who helps him hawk clothes, making for touching moments that are indicative of the complicated relationships that pepper the film. There is companionship and bonding even in the most difficult of circumstances that, through the course of the runtime, gives Zhao's drama an uplifting sweep. Although occasionally threatening to be so calm that it comes to a standstill, this is a lilting, immersive film that has an emotional afterglow. 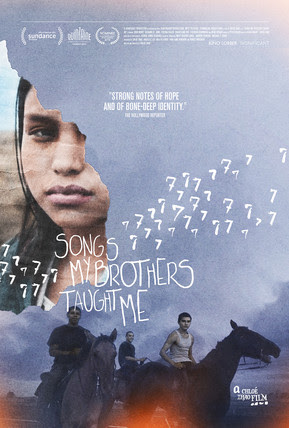 Life for siblings on the Pine Ridge Reservation.