Considering how far away space is, it's amazing how familiar its stories have become. We've been here before, with Sandra Bullock (Gravity) and Cillian Murphy (Sunshine) among others. This time Steven Ogg is in the hot-seat as Troy Holloway - "flying blind" in an escape pod, his co-pilot dead and on a collision course with the Sun. This may be just a one-actor film (with Alice Lowe on backing vocals as the commander of a potential rescue ship) but it's all going on. And when I say all, I mean it. Within minutes, we learn that Holloway is, within the hour, going to be cooked, frozen and/or irradiated, if, of course, his oxygen doesn't run out first.

This 'throw the lot in' attitude by debut feature writer/director Carl Strathie is a big part of why the film never quite grips as it should. The potential disasters are all laid out in advance, like a tasting menu, so that we're able to see where our evening will take us, mentally checking the points off as we go along and knowing that we'll have to get through the lot before we're done.

With the peril prescribed, it falls back on the human relationship angle to do the donkey work, which is where Lowe comes in - a voice through the static, willing Holloway to survive. Though both actors are fully committed - with Ogg finding an impressive number of ways to express being in mental anguish and physical agony - the script sells them short. It's true that both characters have had a very bad day at the office but they talk to each other as though they're in Astronauts Anonymous. Lowe, as Commander Roberts, suffers from stereotype, initially barking orders before revealing she's all squishy and feminine after all - hardly the sort of thing they're likely to drum into you at the space experts' academy. Then come the all too convenient back stories of woe that share similarities.

The pacing, like Holloway, is out of control, sometimes racing along but, more often, hanging about for no apparent reason. Strathie has a good eye for an image - a silhouette against blinding light, for example - but he is too tempted to linger with it to the point of melodrama. This feeling is further accentuated by bombastic scoring from David Stone Hamilton, which starts so big it has nowhere to go. The technical team recreate the spaceship in believable, grungy detail and Strathie deserves credit for bringing a fresh idea to Holloway's inevitable life or death journey out of the craft. For the most part, though, this film is stuck in an all too familiar orbit. 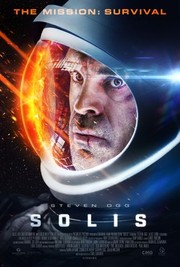 An astronaut finds himself trapped in an escape pod heading towards the sun.